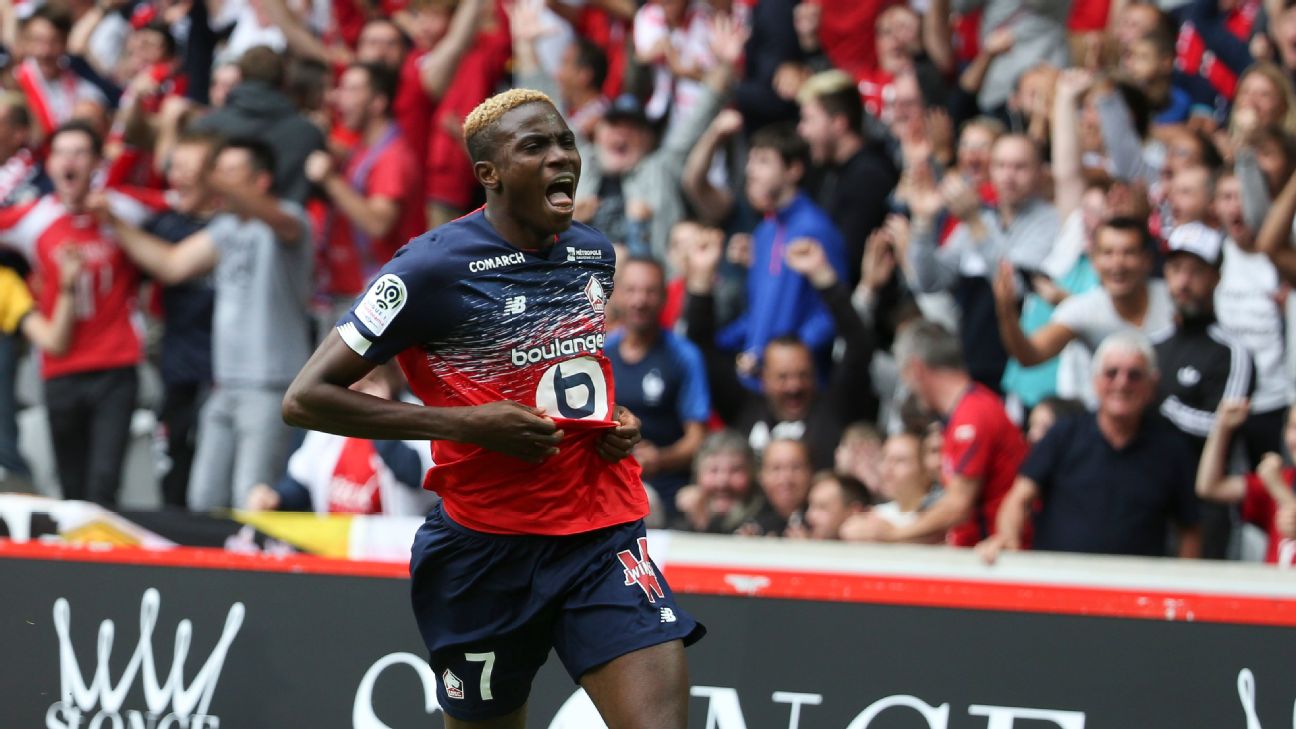 It took Victor Osimhen all of 19 minutes to not only announce his arrival to Ligue 1, but to throw down the gauntlet to any and all competitors for the Nigeria number 9 jersey.

And what a way to make that announcement for the new Lille man, who bagged a brace against FC Nantes in their season opener on the weekend. Nicolas Pepe… who?

For the first goal, Jose Fonte’s hoofed clearance all the way from the back looked anything but dangerous, especially as Osimhen was sandwiched between two defenders. But that was no problem for the young Nigerian. He brought it down off his chest, his slightly imperfect second touch dragged it away from the defender, and set him up for the finish.

With 10 minutes to go, Osimhen struck again, this time from close range, to hand Lille all three points. It was the perfect start for the 20-year-old, who only joined the French side this offseason, tasked with filling the big boots left by the £72 million departure of Pepe to Arsenal.

Trying to match the 22 goals scored by the Ivorian last season will be a tough ask for Osimhen, but there can be no better way to start than with a brace on his very first appearance. And the manner of the goals, the awareness, pace and finish, portend well for the future.

For comparison, Pepe scored seven goals in 29 appearances for Orleans at the same age. And he was not even in Ligue 1.

If there is one thing, however, that needs cleaning up, it is Osimhen’s touch. For the first goal, his second touch looked heavy and against better opposition, the chance might have gone abegging.

It was worse for the second goal, where a very heavy first touch took the ball well away from him and only the compensation of his pace got him there on time to slam it home.

But those are not overly serious issues for a player barely out of his teens, and without the benefit of the foundations that players in western countries enjoyed. Although playing in one of Europe’s top 5 leagues means the cleanup process requires rapid acceleration.

Pepe’s cleats are not the only ones Osimhen will have to fill this year. Following Odion Ighalo’s international retirement, the central striker role in the Nigeria national team is up for grabs.

At the moment, Osimhen is one of a number of players who can fill the role. Captain Ahmed Musa is usually a winger, but has played and done well there during his time at CSKA Moscow. Henry Onyekuru may be a wide forward, but he can also slot in centrally.

Coach Gernot Rohr’s preference, however, is for a big man with pace who can hold up and link play, as well as finish. That leaves Osimhen and FC Midtjylland’s Paul Onuachu as the viable options.

The Danish league is yet to start, which means that this brace, coupled with his 12 goals last season for Charleroi SC, have put Osimhen ahead of Onuachu to claim the Nigeria number 9 jersey in next month’s friendly against Ukraine.

To actually get it though, he will need to show the same sort of consistency he showed last season in Belgium, where he averaged almost a goal every league game.

He has already proven that he can score at international level, his hat trick against the Libya under-23s rescuing Nigeria’s Olympic Games chestnut.

If he can show that same efficiency and consistency at both club and international level, work hard, stay disciplined and keep his focus on football and not all the extraneous things that distract footballers, he has all the tools to be an even better striker than the revered Rashidi Yekini.

Nigeria’s squad to face Ukraine in a friendly next month is not significantly different from the squad which won a bronze medal at the Africa Cup of Nations recently, but there are some eye-catching additions.

Leicester City’s Kelechi Iheanacho, who was cut from the Afcon squad, has been handed a lifeline to work his way back in. This is a defining season for the Foxes forward and how he responds in this friendly, plus his performance in the Premier League this season, will have a huge impact on his continued international future.

In goal, Daniel Akpeyi’s international career appears all but over after his howler against Algeria, and he has not been included. Rohr has chosen to call up Fortuna Dusseldorf’s youngster Maduka Okoye in his place.

It is likely there will be plenty of rotation in that third goalkeeping spot going forward. Unless, of course, Maduka shows enough to claim it. In which case, both Francis Uzoho and Ikechukwu Ezenwa will need to be very concerned.

Glasgow Rangers’ Joe Aribo is the second newbie to get a call up. The central midfielder is an exciting find and has been called the new Yaya Toure. He is big, strong, and can play in both defensive and offensive midfield.

He joined Rangers from Charlton Athletic in July and has already scored three goals in six appearances. He might be just what the doctor ordered for the Super Eagles midfield post-Mikel Obi.

The real good news though is the return of Tyronne Ebuehi. The full back tore his ACL during the World Cup and has been out since, but is now fully recovered. His return means that Shehu Abdullah’s place could be in real danger, as his constant injuries have been cause for concern.