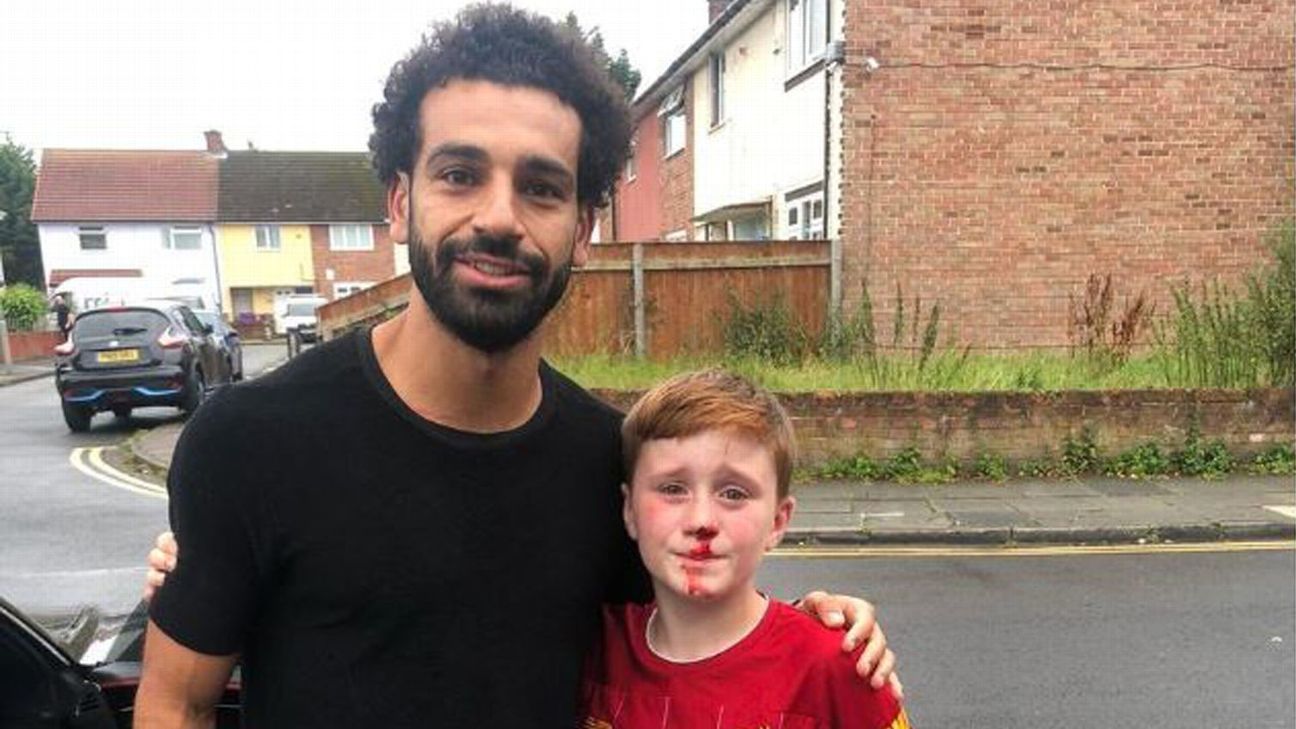 A young Liverpool supporter’s attempt to get a glimpse of his hero Mohamed Salah left him with a bloodied nose but the pain was quickly forgotten when the Egypt striker showed his compassionate side by posing for photos.

Louis Fowler, 11, crashed into a lamppost and fell to the ground with blood coming out of his nose after he and his younger brother Isaac ran beside Salah’s car on Saturday while waving at the Liverpool player, Sky News reported.

Having spotted the youngster in pain, Salah circled round to check on him before offering to pose for pictures.

@MoSalah thank you for coming back to check on my boys after Louis KO’d himself trying to get a wave! He loves you so much and the pain went away instantly when you came to give them a hug. A nose reset worth well worth it he said. You are a top man and a true gent! #EgyptianKing pic.twitter.com/wrmHc4vxB9

“Whilst [we were] ringing an ambulance we saw Mo driving into the close having spotted Louis and following back to the close to check they were both okay,” Fowler’s stepfather Joe Cooper told Sky News. “The kids were screaming with excitement as he got out of the car and Isaac went into hysterics and hugged him.

“Mo was very apologetic and caring and was really compassionate towards the boys and made them feel so much better.”

Totteham may have had NBA star Josh Hart and Oscar-winning actor Susan Sarandon in attendance for their 3-1 win over Aston Villa on Saturday, but League One side Portsmouth also had a Hollywood guest at Fratton Park in the form of soccer-mad Will Ferrell.

Ferrell, who is a part-owner of Major League Soccer team LAFC, was on the south coast of England to see a 2-0 win over Tranmere Rovers for the club owned by former Walt Disney Company chief executive Michael Eisner.

“It was great to meet him, he is a great character,” Portsmouth manager Kenny Jackett told BBC Radio Solent. “He thought we ran offside too many times and the lads had a bit of banter with him.”

Congratulations to @Pompey on a job well done today. A clean sheet to go with our first points of the new season. Fans were great as always! Big match next weekend against Sunderland. #PUP @Pompey

Now, usually this news would be all the excuse the Toe Poke needed to crowbar in as many puns and references based on Ferrell’s movies as possible, but match commentator Danny Jamieson’s Herculean effort puts all other attempts in the shade.

Will Ferrell at Fratton Park. Which means prime opportunity for a pun laden #EFLonQuest highlights package. 14 in all, see if you can spot them… 😁 pic.twitter.com/ZRJM9GEp94

Malcom hitting ref with ball is an instant gif classic

Former Barcelona midfielder Malcom got his first win since joining Zenit St Petersburg at the second attempt on Saturday, helping his new club to a 2-0 victory at Dinamo Moscow.

However, no matter how well he does in the Russian Premier League, it’s hard to imagine he’ll do anything that will make as big an impact as the moment he hit the unsuspecting referee with a long-range ball.

The moment, including the official’s excellent reaction, was captured in super slo-mo and has promises to become an instant meme/reaction gif classic.

If proof were needed that it’s not just fans who are addicted to the iconic simulation game that is Football Manager, then check out this footage of Barcelona’s Carles Alena.

The 21-year-old midfielder, who enjoyed a breakout season last term after making 28 first-team appearances, was spotted boarding the team plane after Barca’s 4-0 win over Napoli in Ann Arbor on Saturday – while at the same time glued to his Football Manager team on his laptop.

Of course, this gives rise to the inevitable questions: Is he playing as Barca? If not, has he signed himself for whatever team he is managing? And has he given himself extra training?