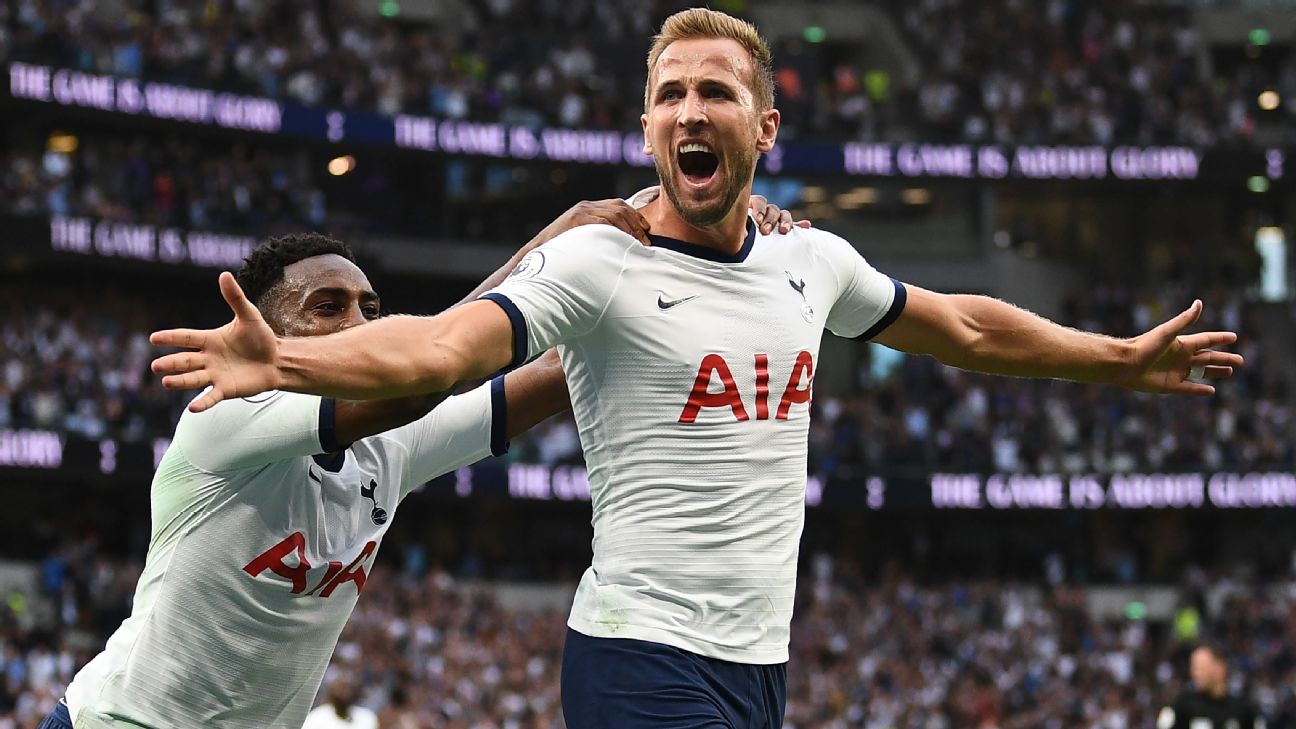 They made hard work of it, but Spurs eventually broke a stern Aston Villa resistance to win 3-1 at the Tottenham Hotspur Stadium to open their Premier League account at the first time of asking.

Harry Kane was at his clinical best as he scored two late goals to break Villa hearts, while a debut goal for Tanguy Ndombele drew his side level after a John McGinn strike against the run of play frustrated the home side for large spells.

The toughest test of all is next up for Mauricio Pochettino’s men, as they head to the Etihad to face Manchester City next Saturday.

Ndombele’s debut provided plenty of promise. The Frenchman showed a beautifully deft touch to set up Kane for a first-half chance, and his long-range strike to restore parity was a beautiful marriage of technique and power.

For the first 73 minutes of the game, the match seemed to head to the never-ending glossary of games that Spurs have made a mess of over the years. Has Champions League final heartbreak provided Pochettino’s side with that little bit of extra steel to see them over the line in games like these? Only time will tell, but it’s a start.

The absence of Heung-min Son was a chance for Lucas Moura to stake a claim for a regular slot in the Spurs lineup, but the Brazilian was ineffective, while the performance of Erik Lamela was equally lackluster.

Danny Rose, meanwhile, was a constant threat going forward, but didn’t cover himself in glory when he failed to shepherd the advancing McGinn away from goal for the Villa opener. That wasn’t the only time he was caught out, which will provide plenty of food for thought for Premier League managers throughout the season.

Mauricio Pochettino, 7 — His decision to start with Christian Eriksen on the bench initially raised eyebrows, but his introduction after the hour-mark provided a timely boost at a time when it looked like it wasn’t going to be Spurs’ day. The withdrawal of Harry Winks could have left gaps for Villa to exploit, but it was a perfect tactical switch that went a long way to heaving Spurs back into contention.

GK Hugo Lloris, 6 — The Frenchman had nothing to do apart from pick the ball out his net for McGinn’s opener. A virtual bystander for the remainder of the game.

DF Kyle Walker-Peters,  7 — After a quiet start, the 22-year-old gradually grew as an attacking force as Spurs pressure increased.

DF Davison Sanchez, 6 — Had close to nothing to do, but efficiently mopped up most of Villa’s counter-attacks.

DF Toby Alderweireld, 6 — Assumed the quarterback role in Tottenham’s back four as he sprayed the ball wide for the advancing full-backs.

DF Danny Rose, 6 — A Jekyll and Hyde performance from the England man. A constant threat going forward on the left, but should have done much better in defence to deny McGinn his goal.

MF Harry Winks, 6 — Kept play ticking over in the middle of the park and offered defensive protection against the Villa break, but could be braver in possession.

MF Tanguy Ndombele, 7 — Showed glimpses of his combative side early on. Occasionally dithered on the ball, but a superb guided finish hauled his side back into the game.

MF Erik Lamela, 5 — The Argentine was on the periphery of the game for large periods, and wasted chances to deliver a telling final ball.

FW Harry Kane, 8 — A very quiet first 85 minutes, but the England captain was devastating with his two second-half openings late on. Clinical.

FW Lucas Moura, 5 — After a bright opening couple of minutes, the Brazilian was starved of space by a deep Villa backline and faded out the game.

MF Christian Eriksen, 7 –  Came in for Winks in the 64th minute. The Dane’s introduction gave his team a lift, and his free kick drew a great save from Heaton in the Villa goal.

FW Georges-Kevin Nkoudou, NR — Came in for Erik Lamela in the 88th minute.

MF Oliver Skipp, NR — Came in for Ndombele in the 92nd minute.

Klopp: We were improved despite FA Cup exit
Sources: Galaxy, Barca deal for Araujo in danger
Why the transfer window should be abolished: chaos for clubs, a playground for agents
Real Madrid keep up in title race but Benzema, Militao injuries a worry
Ten Hag urges Utd to strike before Jan deadline