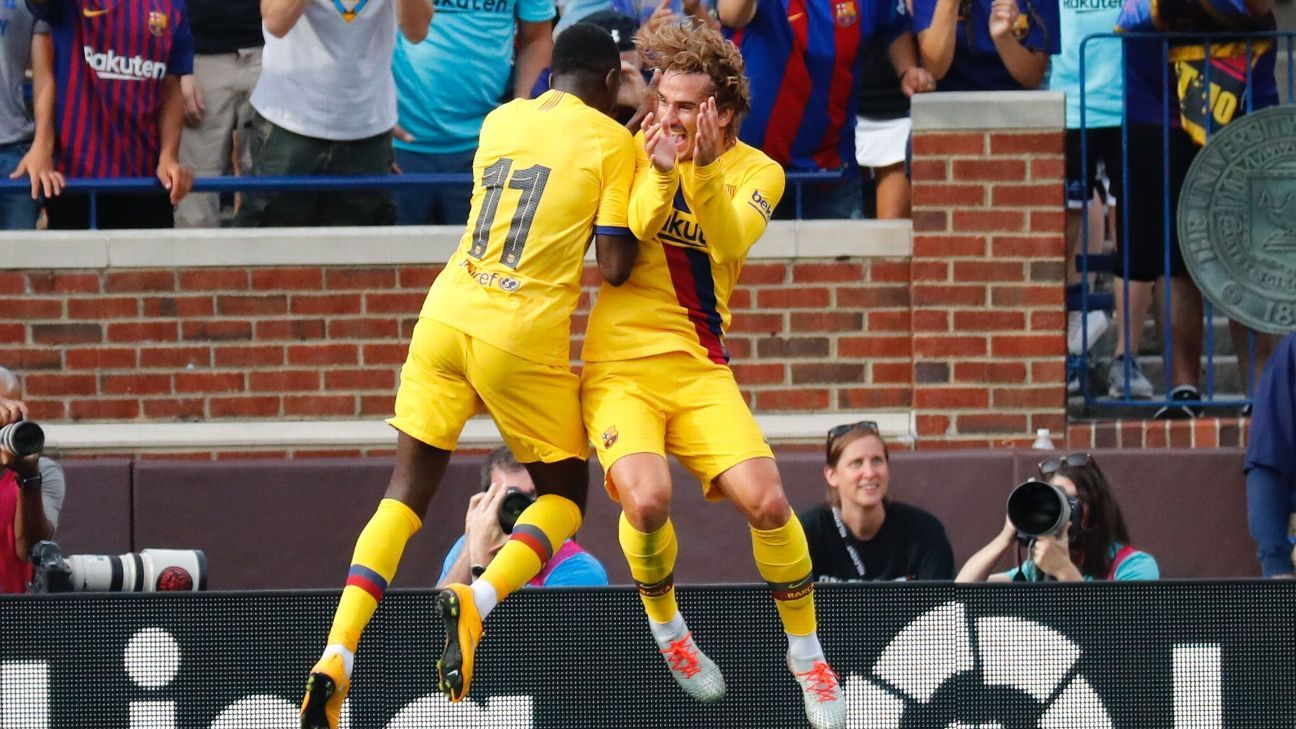 Barcelona tore Napoli apart in 15 second-half minutes as they won 4-0 at Michigan Stadium on Saturday in front of an attendance of just over 60,000.

Luis Suarez scored twice to take his pre-season tally to three, while there was also a first Barca goal for Antoine Griezmann since his €120 million move from Atletico Madrid earlier this summer. Ousmane Dembele completed the rout.

Barca’s win comes three days after they beat Napoli 2-1 in Miami and sees them end their tour of the United States as the first-ever winners of the La Liga-Serie A Cup.

With only Lionel Messi missing through injury in Ann Arbor, Ernesto Valverde picked a strong side with the season-opener against Athletic Bilbao at San Mames just six days away.

The Spanish champions quickly took control of the game. Frenkie de Jong controlled things in the middle, while the pace of Nelson Semedo and Dembele on the right and the ingenuity of Griezmann on the left caused their Italian opposition problems.

Griezmann came close to an opener and Suarez, after seeing a penalty appeal turned down, saw an effort tipped over by Alex Meret.

It was Napoli, who don’t kick off their league campaign until Aug. 24 against Fiorentina, who came closest in the opening period, though. Spain U21 midfielder Fabian Ruiz slid wide at the far post in the 45th minute.

Barca will have been pleased with their first-half performance but they took things to another level after the break.

Suarez opened the scoring after linking with Griezmann in the 48th minute as the Blaugrana blew Carlo Ancelotti’s side away with four goals in 15 minutes.

Griezmann added the second, his first for the club, after Carles Alena and Jordi Alba combined to set him up, before Alena was again involved in setting up the third goal. The young midfielder’s pass found Dembele, who teed up Suarez to bend home from 20 yards.

Dembele himself then added the fourth, latching on to De Jong’s pass with the outside of his boot and firing across the helpless Meret.

Napoli would have been relieved to see Valverde make five changes moments later. Griezmann and Suarez were among those to be taken off as Philippe Coutinho, Arturo Vidal and Arthur Melo came on for their first appearances of pre-season.

Rafinha was also introduced and only a Meret save denied him a goal after a fine Coutinho pass. Coutinho himself then tried his luck, but Meret was on hand again to keep the score down.