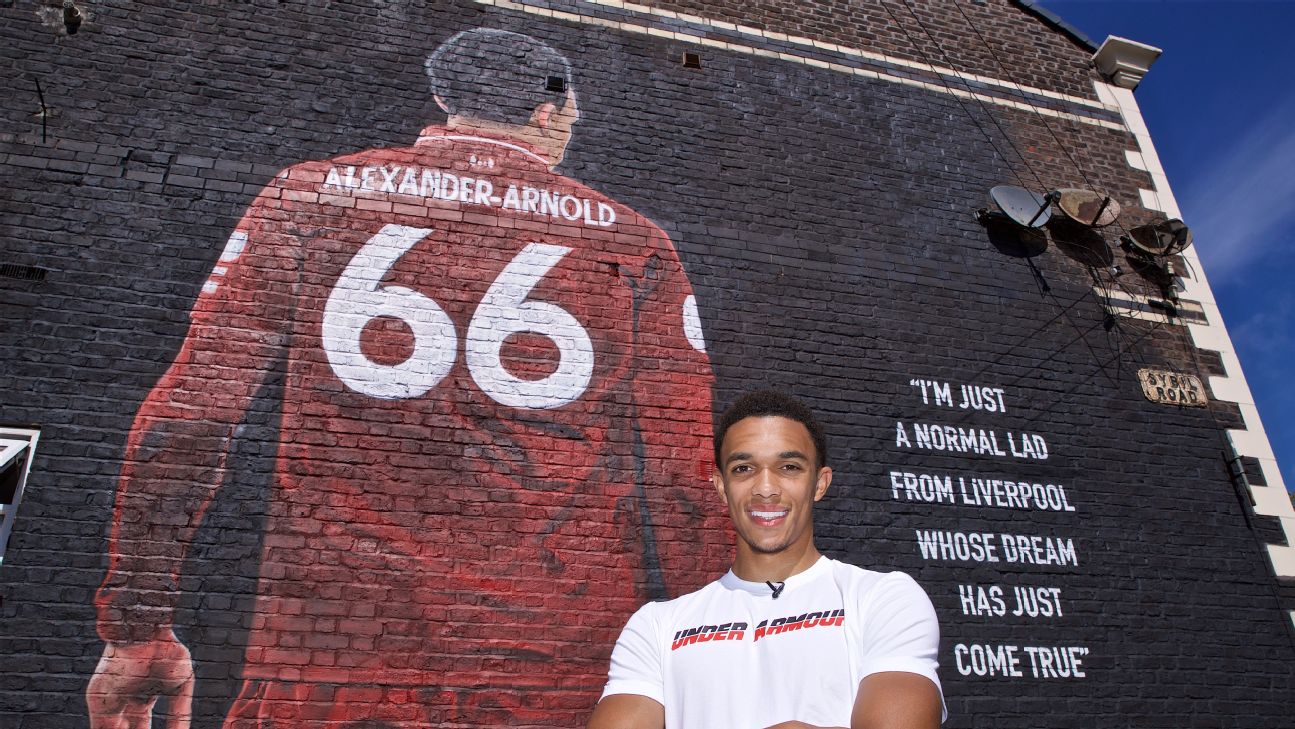 LIVERPOOL — In the shadow of Anfield, there is new light for the community. A blank wall on Sybil Road, a minute’s walk away from the stadium, has morphed into a message of inspiration and a call to action.

The faded brown brick is now covered by a giant mural of Liverpool’s Trent Alexander-Arnold, featuring his reaction to winning the Champions League in June: “I’m just a normal lad from Liverpool, whose dream has just come true.”

Most significant, though, are the words beside the painting: “For Fans Supporting Foodbanks.”

Alexander-Arnold saw the work, commissioned by Liverpool podcast and fanzine The Anfield Wrap and created by French graffiti artist Akse, for the first time on Thursday and his eyes were fixed on that dedication.

“It’s not just about the picture, it’s important that message is there,” says the Liverpool native, who is one of the biggest contributors to Fans Supporting Foodbanks, which has set up collection points at Anfield and Goodison Park and delivers items to the North Liverpool foodbanks to help those most vulnerable to food poverty.

“We got told the mural was only a few metres down the road from the ground, and hopefully it’ll raise a bit more awareness and let people know they can give back whenever they can. Foodbanks are always there for the good of the city, to try and get rid of the poverty and help the people going hungry.”

Social responsibility was a huge part of The Anfield Wrap’s thinking when they wanted to celebrate a local Scouse lad being so instrumental to Liverpool winning the Champions League in June.

On the way back from Madrid following the 2-0 victory over Tottenham, which secured Liverpool’s first trophy under Jurgen Klopp and the club’s sixth European Cup, they discussed ways of paying tribute to Alexander-Arnold.

“I wanted it to be something that Trent and his family could visit and be proud of and that would inspire kids in the community and beyond,” The Anfield Wrap’s Craig Hannan told ESPN FC, after the group had initially considered using billboards around the city. “This is not just a celebration of a footballer, it’s a celebration of a person who represents his community so well, whose values resonate with us as fans and so it was important that a cause within the community benefited.

“It feels like everyone always wants something from a footballer, this time we were able to give something back, while raising awareness of a cause that’s so important to us. The wall is on the street that the team bus drives past and where Fans Supporting Foodbanks collect donations before every game. If the wall reminds one person a game to donate some food, then it has done its job.”

Alexander-Arnold’s mother, Diane, had already been down to see the artwork before it was completed and flooded her son’s WhatsApp with proud pictures of her in front of it.

His friends, too, have been firing over snaps on a daily basis. Klopp, who has a mural in the Baltic Triangle area of the city, had told the 20-year-old to expect as much.

The Liverpool manager joked that the player’s portrait should be “around a corner,” given his quick-thing set-piece against Barcelona which helped seal a historic 4-0 comeback in the Champions League semifinals, and it actually is.

“I hope it’s big enough, that he likes it and he has enough friends and family in Liverpool, who will be so happy with it,” Klopp told ESPN FC. “I hope they take their pictures in front of it, like what happens with my little drawing.

“I get a lot of pictures from friends when they visit me in Liverpool and show me they were standing by it, so hopefully he gets that too. It’s nice for him.”

The artist Akse was also responsible for Klopp’s mural and he painted Alexander-Arnold’s just by looking at a small picture. The choice of image was typically understated from the full-back and his brother, Tyler, who is also his agent.

“We spoke to Trent and Tyler first as we wanted to make sure they were comfortable with the mural and they’ve been brilliant with us from start to finish to be honest,” Hannan said. “We WhatsApped ideas for the image back and forth — Trent with the European Cup, with the medal in his mouth and celebrating — but I think it shows the kind of person he is that he chose the image with his back to the wall. That’s humility.”

Klopp’s assertion that “people are desperate, waiting constantly for these specific local figures and it could be sometimes too much pressure, but it’s not for Trent” is correct.

Alexander-Arnold relishes rather than wilts in the responsibility of representing his city.

“You’ve got to be ready to be a role model, that’s part-and-parcel of the game now,” he said. “It’s not like in the old days, where it was literally just football and you could do what you want off the pitch. It has to be a 24/7 thing, but you get used to it straight away.

“I think the work we do at Liverpool’s academy has prepared us really well. It’s not about just being able to hold your own on the pitch, it’s about being ready to work hard and do everything off the pitch as well. I think as long as you’re a good person then people will see that, and people will look up to you.”

Alexander-Arnold, an ambassador for An Hour For Others, a Liverpool-based charitable organisation that encourages local people and businesses to put back into the community, added: “I think the main thing about Liverpool is that the players don’t just fall in love with the club, they fall in love with the city. A lot of old players that aren’t originally from Liverpool will always come back here because there’s a connection. The fans give so much to you that you feel indebted to them.