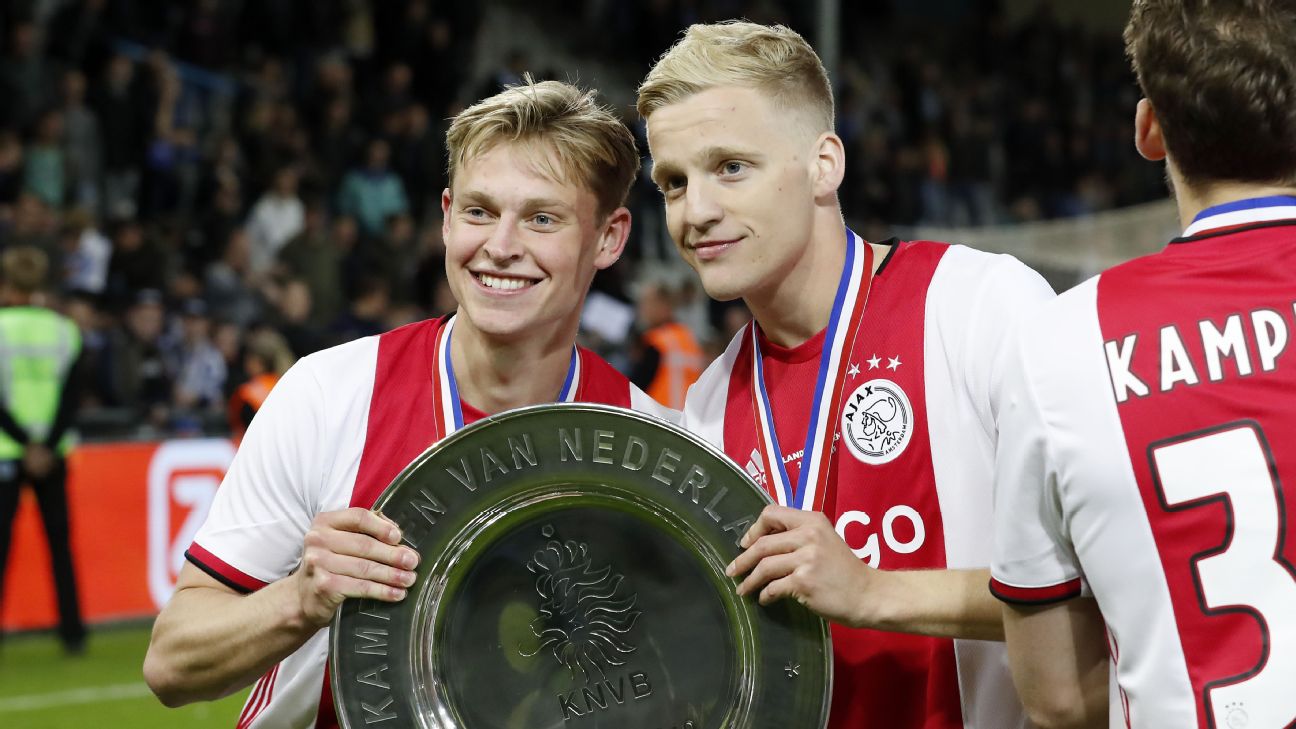 ANN ARBOR — Barcelona midfielder Frenkie de Jong has no doubt Donny van de Beek is good enough to improve Real Madrid but joked he would prefer his ex-teammate to stay at Ajax.

Van de Beek, 22, has confirmed Madrid are in talks with Ajax as they look to bolster their midfield before the transfer window closes.

– ESPN fantasy: Sign up now!
– When does the transfer window close?
– Inside the Ajax talent-making factory

De Jong played alongside Van de Beek last season as the Dutch club won a domestic double and upset Madrid and Juventus on their way to a Champions League semifinal, where they were eventually beaten by Tottenham Hostpur.

“I would prefer him to stay at Ajax because I wouldn’t have him as an opponent and Ajax would stay strong,” De Jong told ESPN FC when asked if he would like to see Van de Beek join Barca’s Clasico rivals.

“But, no, of course, when it’s all settled, and if he moves to Madrid, I am really happy for him. I think he deserves it. He’s a great player. Then I will go see him in Spain!”

Van de Beek would be competing for a place in Zinedine Zidane‘s side with Ballon d’Or winner Luka Modric, Toni Kroos and Casemiro, among others.

However, De Jong said he believes his compatriot has the quality to become the latest in a string of young players to leave Ajax and make their name at the very top level.

“I am pretty sure he has the ability,” he said. “I think he showed it last season in the Champions League, especially in the knockout rounds.

“I think he has shown to the world and everyone in Europe he has the ability to play at that level.”

Van de Beek would become the third big-name player to leave Ajax this summer. De Jong joined Barcelona in a deal worth €75 million and defender Matthijs de Ligt signed for Juventus in a similar deal.

De Jong said it is sad to see such a successful, young team slowly broken up but has no regrets about his move to Camp Nou.

“I am really proud of the season we had and I am proud to see guys making big movements — I think they all deserve it,” he said.

“But of course I feel a bit sad — not that I regret it because I am really proud and happy to be [at Barcelona] — but of course it’s a bit sad that the team is breaking up.

“But you know that those things are going to happen when you have a season like that at a club like Ajax. It’s just the way it is.”

Asked if he can envisage a future where Ajax are able to hang on to their best young players and build, he added: “I think it depends a lot on the competition. The competition needs to grow a lot.

“The Eredivisie is, for me, a great competition to play in and it was a great time but the Eredivisie nowadays cannot compare to La Liga, Premier League and all those competitions. It has a lot to do with the competition.”

Ronaldo’s latest row with his coach is nothing new; he has a long history of them
Sources: Ronaldo has not agreed Al-Nassr move
Everything you need to know about Goncalo Ramos, the man who replaced Ronaldo and Nunez
England ‘ready’ to compete for trophies – Lloris
How Giroud surpassed Henry’s France goal record