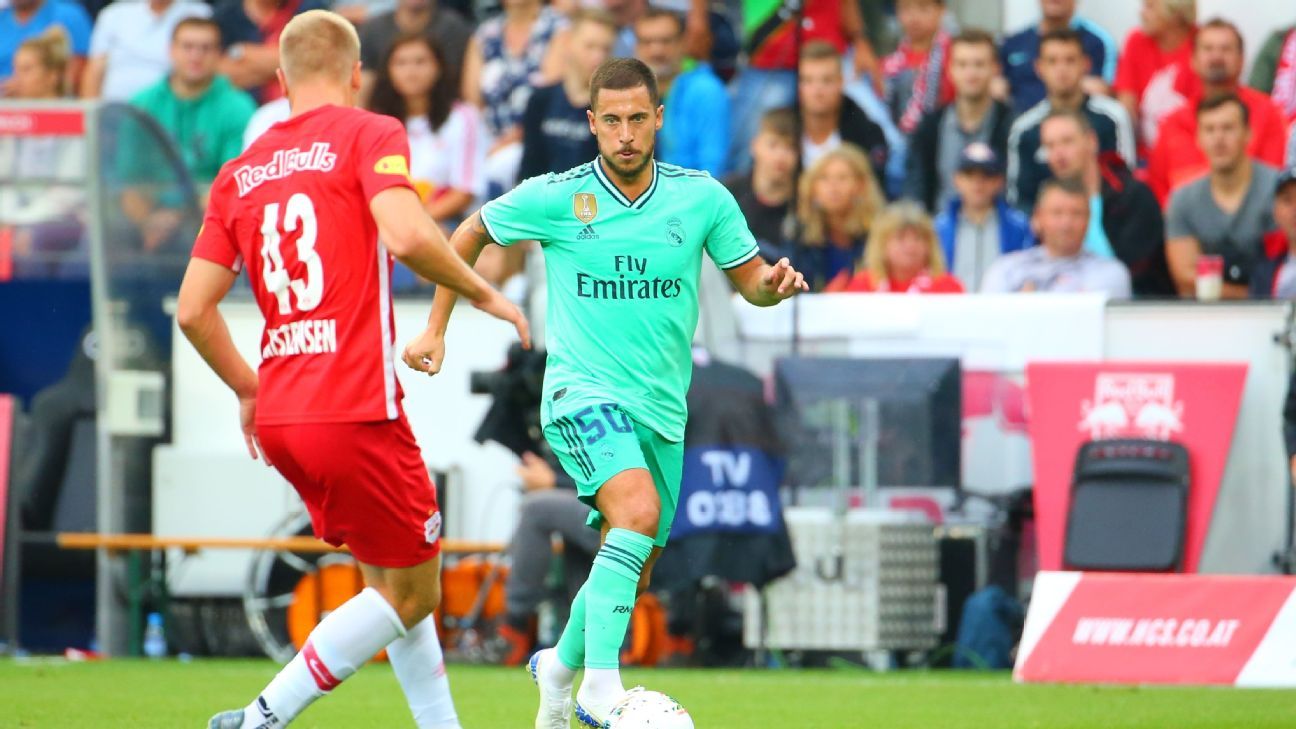 Eden Hazard‘s first goal for Real Madrid was enough for a 1-0 win in Wednesday’s pre-season friendly at Red Bull Salzburg, but Zinedine Zidane’s side still look very much a work in progress with just over a week to go until the La Liga season begins.

Former Chelsea attacker Hazard put in his best performance since joining Madrid for €120 million earlier in the summer — his game-winner came midway through the first half when the Belgian ran clear on the break, cut inside his marker, and thumped a 20-yard drive to the net.

Zidane’s side lined up in a new 3-5-2 formation, with new €50 million defender Eder Militao one of three centre-backs. The experiment was not an immediate success and skipper Sergio Ramos struggled at times to handle Salzburg’s strapping 19-year-old centre-forward Erling Braut Haaland, son of former Leeds midfielder Alfe Inge Haaland.

Hazard linked very well with strike partner Karim Benzema, and he almost made it 2-0 before the break after skipping past the last defender only to be denied by Salzburg goalkeeper Cican Stankovic.

The Austrian side dominated after half-time but 20-year-old Zambian forward Patson Daka blasted wide having lost his composure when straight through on goal. The game opened up as both Zidane and home coach Jesse Marsch emptied their benches, with three Madrid defenders booked for cynical fouls, but goalkeeper Thibaut Courtois having no serious saves to make.

A second consecutive pre-season victory was a boost for Zidane, who had pointedly left unwanted Galacticos Gareth Bale and James Rodriguez at home in the Spanish capital, amid moves by the Bernabeu hierarchy to bring in new stars in Paul Pogba and Neymar

“I am very happy with how the team played. We played a good game, with a new shape. But we will do many things this year,” Zidane told RMTV after the match. “The important thing is to keep going with our pre-season, just one game left before La Liga starts. Bit by bit we are getting ready, and we are better all the time.”