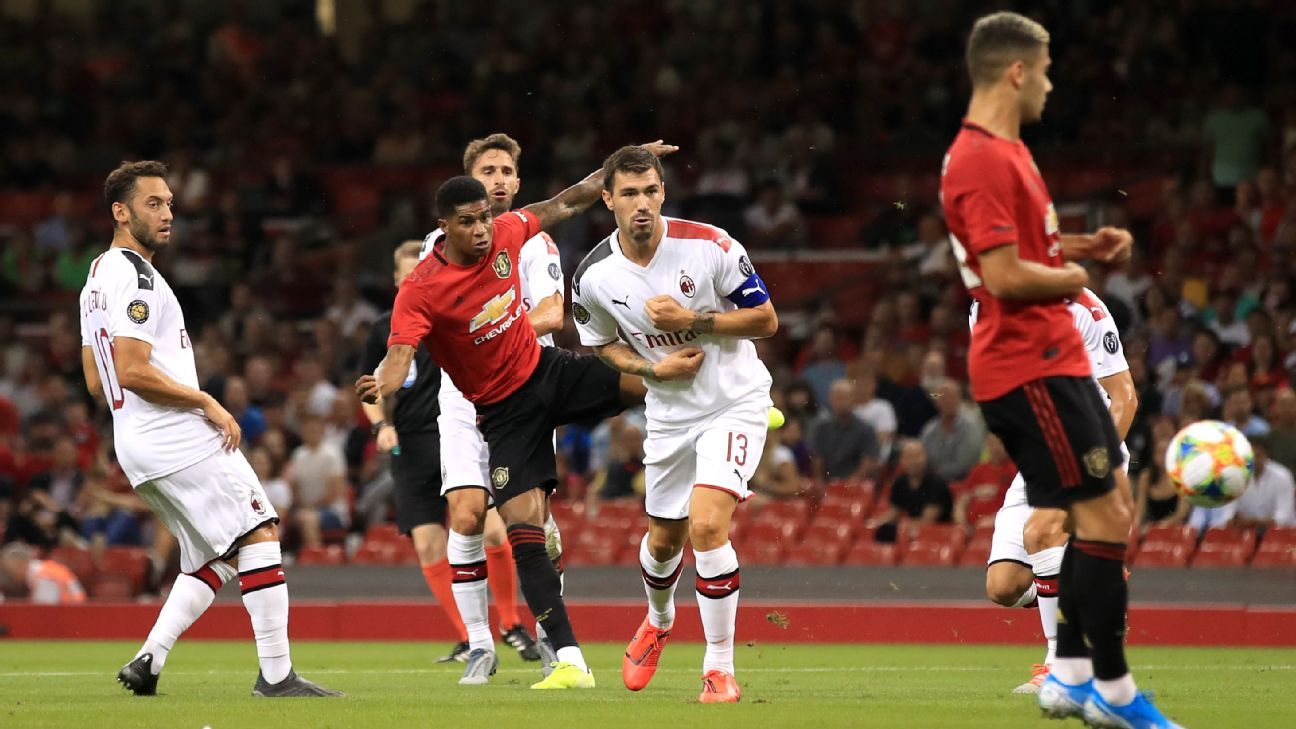 CARDIFF — Manchester United, who were without Paul Pogba amid renewed interest from Real Madrid, ended their preseason preparations with a 5-4 win on penalties after David De Gea saved from Daniel Maldini, son of Milan legend Paolo.

Before the shootout, Ole Gunnar Solskjaer’s side needed Jesse Lingard’s equaliser to claim a 2-2 draw in front of 65, 892 fans at the Principality Stadium after Suso and a Victor Lindelof own goal had cancelled out Marcus Rashford’s opener.

After wins over Inter and Tottenham, a 3-0 win would have seen United crowned winners of the International Champions Cup but they could only manage a draw in their final warm-up game before the Premier League season kicks off against Chelsea at Old Trafford in eight days’ time.

Milan do not play their first Serie A game for another three weeks and United started like a team ahead in their preparations.

Rashford, starting on the left again with Anthony Martial deployed as the central striker, sent goalkeeper Gianluigi Donnarumma an early warning with a strike that arrowed towards his near post and then, on 14 minutes, went one better.

Nemanja Matic flicked a pass out to the left for Rashford to gather, cut inside and guide his effort — via a slight deflection — into the far corner. It was a lightning break, the kind of which Solskjaer will hope to see more in the coming season, but if the opening exchanges belonged to United, the rest of the half was dominated by Milan.

Twelve minutes after going behind, the Italians drew level after Matic lost possession 35 yards from goal. The ball ended up at the feet of Suso, a former Liverpool youngster, who found himself in acres of space on the edge of the penalty area and bent a shot beyond De Gea.

The United goalkeeper, named captain for the second time in a week, then palmed away a Suso cross that beat everyone before punching clear Krzysztof Piatek’s attempted chip after Lindelof had slipped.

It all served as a reminder that Harry Maguire cannot arrive soon enough. The England centre-back is set to be announced as a United player early next week after an £80 million fee was agreed with Leicester on Friday.

Solskjaer will hope Maguire can help stop the type of goal that saw Milan take the lead on the hour mark when Samu Castillejo saw a tame header flick off Lindelof and beyond De Gea.

While United were having problems at the back, they still looked dangerous going forward and it was no surprise when Martial rolled a pass into second-half substitute Jesse Lingard, who fired the equaliser past former Liverpool goalkeeper Pepe Reina.

United went on to claim the shootout spoils, with Mason Greenwood, Angel Gomes and Daniel James among the scorers, although their failure to win handsomely means that Benfica are crowned 2019 ICC winners.

South Korea into round of 16 on last-gasp winner; Portugal win Group H despite loss
Follow live: Ecuador, Senegal square off with a spot in the round of 16 on the line
Spain: ‘Nothing to celebrate’ despite WC progress
Pele in stable condition, to remain hospitalized
Follow live: Messi’s Argentina face Australia in World Cup round-of-16