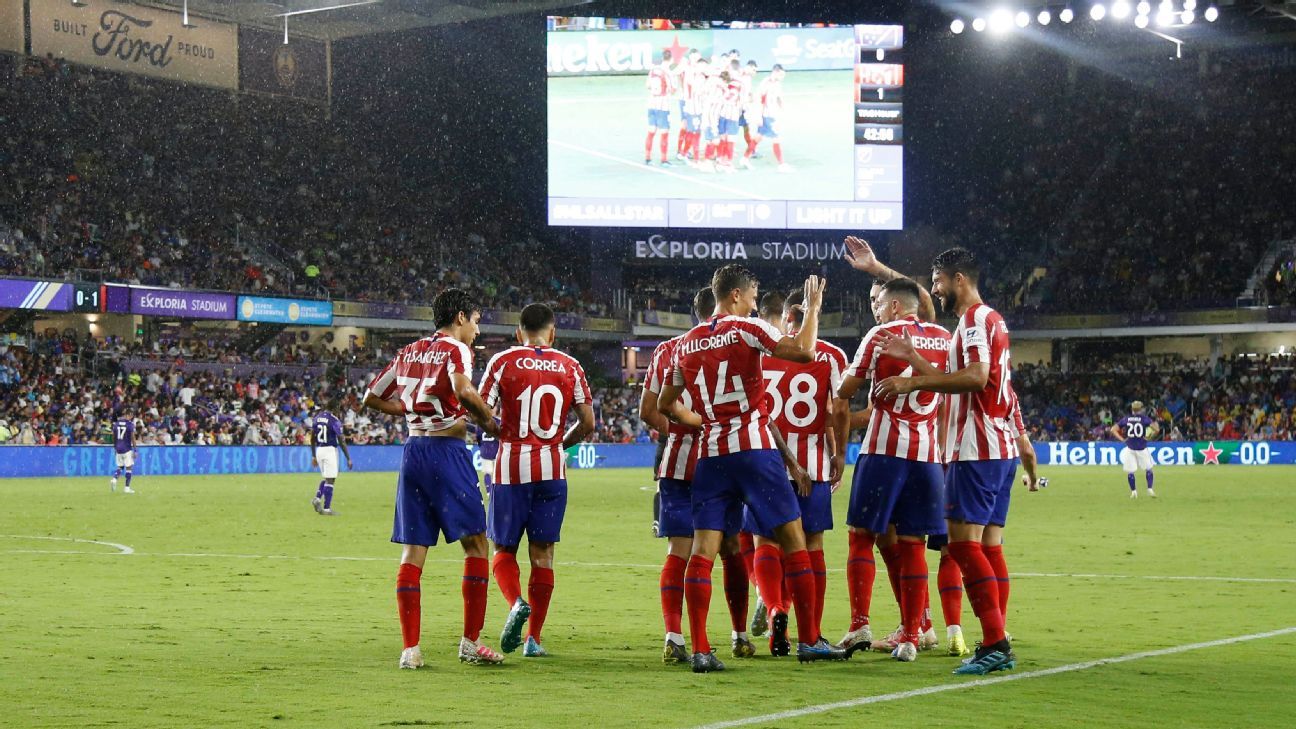 Marcos Llorente scored the game’s opening goal in the 42nd minute, and despite an improved effort by the home side in the second half, Los Rojiblancos were able to seal the victory with goals in the 85th minute from Joao Felix and a Diego Costa stoppage-time tally.

The game was delayed by inclement weather for 34 minutes, and a steady rain fell throughout the match. But once the teams took the field, an Atletico side comprised entirely of reserves was first to settle. Vitolo set up a clear chance for Angel Correa in the eighth minute, only for him to drag his shot wide. MLS keeper Brad Guzan was forced to parry away Carlos Isaac’s drive seven minutes later, with Walker Zimmerman on hand to clean up the rebound.

But the home side gradually found their footing in the game, and Wayne Rooney nearly scored a wonder goal, as his shot from outside the box flew just narrowly over the bar in the 26th minute.

But Atleti broke through just three minutes before halftime. New signing Hector Herrera found Rodrigo Riquelme in space, and his backheel put Llorente in the clear to finish past substitute keeper Andre Blake.

After taking off Guzan and Zlatan Ibrahimovic after 30 minutes, MLS All-Star manager James O’Connor substituted the remaining nine starters at halftime, and the new charges made an impact. Just two minutes into the second half, Seattle midfielder Nicolas Lodeiro picked out LAFC’s Diego Rossi with a cross to the far post, but the Uruguayan’s volley went just wide. Lodeiro then nearly equalized in the 55th minute, but his effort was saved from close range by Atleti keeper Antonio Adan.

Atletico Madrid manager Diego Simeone subbed out all 11 players a minute later, bringing on stars Koke and Costa. Soon after Felix nearly doubled the visitors’ advantage, only for Blake to come up with a sharp save low to his left.

The All-Stars threatened with a few late chances from Atlanta United duo Pity Martinez and Ezequiel Barco and the Chicago Fire’s Bastian Schweinsteiger, but Atletico added a pair of goals in the closing minutes to secure the victory. Felix netted the first with a swerving blast that beat Nick Rimando, before Costa’s collected a long ball over the top and slotted it home to put the contest beyond doubt.