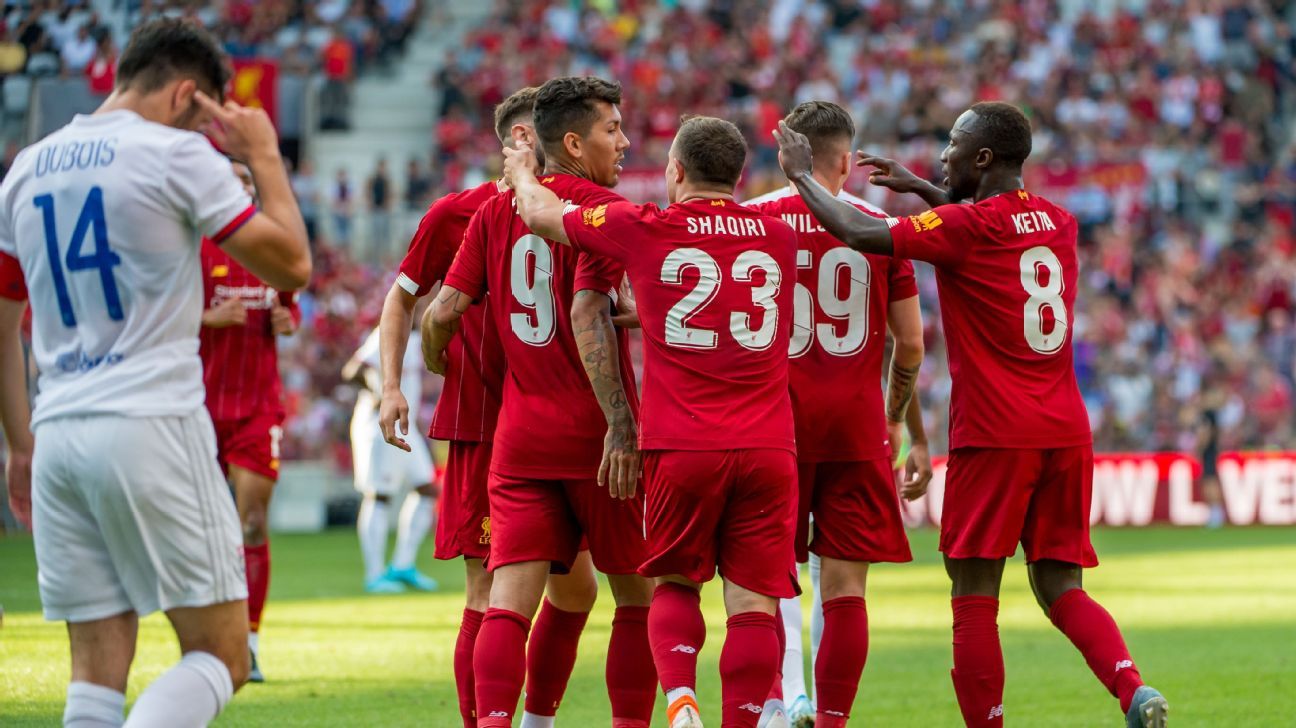 A powered up Liverpool, elevated by the homecoming of some of their world-class talent, eased to a 3-1 win over Lyon in a friendly in Geneva on Wednesday night.

Jurgen Klopp had revealed during the club’s U.S. tour that the game in Geneva was scheduled with a view to the returning players getting minutes in before the Community Shield, so it was no surprise to see Alisson, Mohamed Salah and Roberto Firmino start.

The trio met up with the squad in Evian on Monday following their post-season breaks after international duty, impressing during the fitness tests and in training.

Joining them in the XI at Stade de Geneve were fit-again Naby Keita and Xherdan Shaqiri with the pair recovering from an adductor and calf injury respectively.

Yasser Larouci, subject to a nasty kick in the 2-1 defeat to Sevilla at Fenway Park in Boston which left him with heavy bruising in his femur bone, also featured from the off.

Greater intensity, clever movement and control of the game was a natural consequence of Liverpool’s upgrade in quality.

Keita was the pick of the returnees in the first half, aggressive without the ball and positive in possession. Alisson, meanwhile, will want to erase the opening minutes of his performance, when he fumbled a Memphis Depay ball into the area, with Moussa Dembele trying to toe-poke it in.

Dejan Lovren averted the danger, but the goalkeeper was adjudged to have impeded the forward with Lyon gaining a generous penalty from it.

Depay converted and the Ligue 1 side briefly had Liverpool on the back foot, but the European champions regrouped to dominate the encounter.

Adam Lallana dictated the tempo of play excellently and Keita was superb in breaking up the opposition’s moves to spark his side’s attacks.

Such a sequence materialised on 17 minutes where the Guinea midfielder’s regain ended up with a brilliant first-touch from Firmino, who swivelled and finished on his weaker left foot to level matters.

Four minutes later, Joachim Andersen attempted to clear Ki-Jana Hoever’s cross, but only managed to slice it into his own top corner to put Liverpool ahead.

After the interval, Harry Wilson added to his archive of screamers with a swerving top-corner strike from 25 yards out to make it 3-1.

Klopp will have been delighted to see Alisson (62 minutes), Salah and Keita (both 45) as well as Shaqiri and Firmino (both 30) come through the friendly unscathed.

He will also have been enthused by the intelligence and courage of his young players: right-back Hoever, who signed a professional contract with the club on Wednesday, was stellar in the first half with Larouci also impressing again on the opposite flank.

Harvey Elliot, 16, illustrated why Liverpool feel he is one of the best starlets in Europe with a brilliant cameo.

The team’s bid to to continue to get match sharp will continue in the 2019-20 curtain-raiser against Manchester City at Wembley in the Community Shield on Sunday ahead of a return to Premier League action on Aug. 9 in the opener against Norwich City.