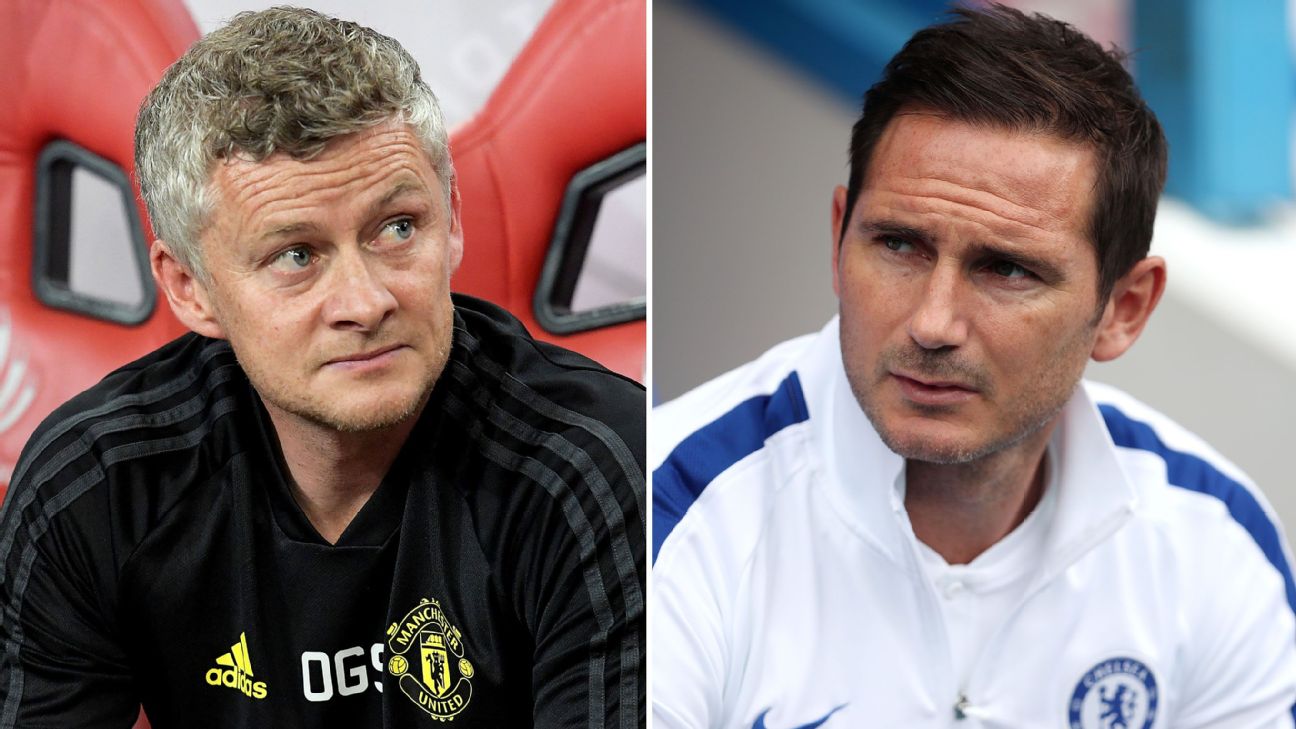 Who are the best managers in the Premier League and what makes them better than the rest? Mark Ogden brings you ESPN FC’s preseason Premier League Power Rankings, with each manager’s trophy-winning record and career highlights part of the formula to determine this season’s 1-20.

The Manchester City manager is arguably the No. 1 coach in the world right now. He’s won domestic titles with Barcelona, Bayern Munich and at City, with two Champions League victories on his CV, too. But Guardiola is not just about trophies; he brings a playing style that has proved to be one step ahead of the rest for a decade since starting out at Barca in 2008-09. Guardiola is the complete manager, but European glory has eluded him in both Germany and England.

By guiding Liverpool to the Champions League title last season, Klopp proved himself to be one of the world’s elite coaches and silenced the doubters who claimed his sides too often fell at the final hurdle. Klopp is a manager loved by players and supporters alike, and his high-intensity playing style has helped turn Liverpool into one of the most exciting teams on the planet, but to claim No. 1 spot, he has to win the Premier League at Anfield.

Five years at Tottenham has so far delivered no trophies, but Pochettino has transformed Spurs from underachievers to a club now established as a Champions League regular, making their first appearance in the final last season. The Argentine develops young players and has a track record for getting everything from those under his charge. The next time a superclub is looking for a new coach, Pochettino will be high on their list.

The Arsenal coach has a tough job on his hands at the Emirates in terms of making the Gunners competitive again, but his track record is beyond doubt, having won six major trophies (including three Europa Leagues with Sevilla) during his time as a manager. The Spaniard faces the biggest challenge of his career at Arsenal, a team admittedly in a transition phase, but he is certainly qualified to take it on.

Now managing the 14th club of his career, one that includes stints at Real Madrid and Manchester City, the Chilean has developed a reputation as a man who brings stability and order to whichever team he coaches. Three major trophies, including a Premier League title, were delivered during his three years in charge of City, and Pellegrini could be the man to take West Ham into the top seven this season.

The former FC Porto and Valencia coach has been a huge success at Wolves since taking charge two years ago. The former goalkeeper has guided the club to promotion to the Premier League and, last season, secured a Europa League spot in their first campaign back in the top flight. Having built an exciting, confident team at Molineux, Nuno is now attempting to push for Champions League qualification.

CAREER HIGHLIGHT: Achieving a “Double Treble” with Celtic in 2017-18 — the first time a Scottish club had won back-to-back trebles

The Leicester manager almost guided Liverpool to Premier League glory in 2014 after building an exciting team at Anfield. Subsequent success at Celtic, where he won eight major honours in three seasons, proved his ability to deliver trophies, but the Northern Irishman also develops attack-minded teams with flair. He now has the chance at Leicester to build a team capable of challenging for honours in England at an ambitious club determined to build on their 2016 title triumph.

Now approaching his seventh year in charge at Turf Moor, Dyche has turned Burnley into an established Premier League outfit on a tiny budget after two promotion campaigns during his time at the club. Qualifying for the Europa League at the end of the 2017-18 season was a sporting miracle considering Burnley’s resources, but Dyche has built a committed, hard-working team capable of upsetting the bigger clubs.

The former England manager is the oldest coach in the Premier League and will be 72 in the first week of the new season, but he’s proving that age is no barrier, having brought stability and consistency to Crystal Palace. Now in his 43rd year as a coach, Hodgson has managed Inter Milan and Liverpool in that time, and his career track record earns him a spot in the top 10.

CAREER HIGHLIGHT: Three promotions from the fourth tier to the Premier League with Bournemouth

Bournemouth were facing relegation out of the Football League when Howe took charge as a 31-year-old in December 2008, but he guided them to safety and has since overseen three promotions to take the club all the way to the Premier League. Now established in the top flight, Howe is regarded as one of the best English coaches, having combined eye-catching football with results at the South Coast outfit.

CAREER HIGHLIGHT: Promotion to La Liga with Almeria in 2013

The Watford coach guided the club to their first FA Cup Final since 1984 last season, only to lose to Manchester City at Wembley. Gracia has turned the Hornets into a tough, physical side with ambitions of European qualification, having gained coaching experience in Spain, Russia and Greece. He was eyed by Chelsea before they appointed Frank Lampard as manager at Stamford Bridge.

The Portuguese coach is now in his third Premier League job after previously taking charge of Hull City and Watford. Silva has been tasked with making the Goodison Park outfit the best of the rest outside the top six, with the club harbouring long-term ambitions and aiming to qualify for the Champions League. Regarded as a coach who brings a short-term improvement, Silva now has the resources at Everton to do that over the long term.

CAREER HIGHLIGHT: Promotion to the Premier League with Norwich as Championship winners in 2018-19

Hired by Norwich in 2017 after two years in charge of Borussia Dortmund’s reserve team, Farke overcame a tough first season in English football by guiding the club to promotion as winners of the Championship last term. The German has brought an exciting brand of football to Carrow Road as well as the success that saw the club return to the top flight.

CAREER HIGHLIGHT: Promotion to the Premier League with Aston Villa in 2019

The Aston Villa manager secured promotion back to the Premier League last term for the club he supported as a boy after less than a full season in charge. Success in the lower leagues while managing on small budgets with Walsall and Brentford earned Smith the chance to take charge at Villa, and his team-building approach paid off with victory over Derby in last season’s Championship Playoff Final.

CAREER HIGHLIGHT: Back-to-back Norwegian titles with Molde in 2011 and 2012

A club legend as a player, Solskjaer must now prove his worth as a manager at Manchester United though his qualifications are less than impressive. Two league titles and a cup in his native Norway with Molde count for little in the Premier League, where he was relegated as Cardiff boss, so his credentials do not stack up like most managers in a job as big as United. He has the goodwill of the supporters, which a big tick in his favour.

Arguably Chelsea’s most illustrious former player, Lampard is an absolute rookie as a Premier League manager, with only one year’s experience of management with Derby County in the Championship. Lampard narrowly failed to take Derby into the top flight last season, but he must now succeed at Chelsea after being given the challenge of replacing Maurizio Sarri at Stamford Bridge.

Wilder has been successful at every club he has managed, starting out in the non-league with Alfreton Town before winning promotions with Oxford, Northampton and Sheffield United. The 51-year-old is loyal to a core of British players at Bramall Lane, and though he faces a daunting task in the Premier League this season, his credentials as a manager are without question.

Nicknamed the “Alpine Klopp” as a result of his success with unfashionable teams in Austria and Germany, the Southampton manager arrived at St Mary’s last December tasked with keeping the club in the Premier League. Hasenhuttl succeeded with room to spare, despite winning only eight of 25 games in charge. He will be tested to the full in the season ahead.

CAREER HIGHLIGHT: Promotion to the Premier League with Birmingham and Hull City

Now in his 11th job as a manager after being appointed Newcastle boss this summer, Bruce must overcome negativity and scepticism from his own club’s fans before getting down to the business of keeping the team in the Premier League. Newcastle born and bred, Bruce at least knows how the supporters think, but having earned a reputation as a managerial firefighter, the former Manchester United captain will need all those skills at St. James’ Park this season.

Having made his reputation as an Englishman abroad by guiding Swedish minnows Ostersund to three promotions in five years, Potter landed his first job in English football with Swansea 12 months ago. Despite a midtable finish in the Championship, Potter was hired by Brighton to replace the sacked Chris Hughton, so the 44-year-old goes into his first season as a Premier League manager with a club who narrowly avoided relegation last term.