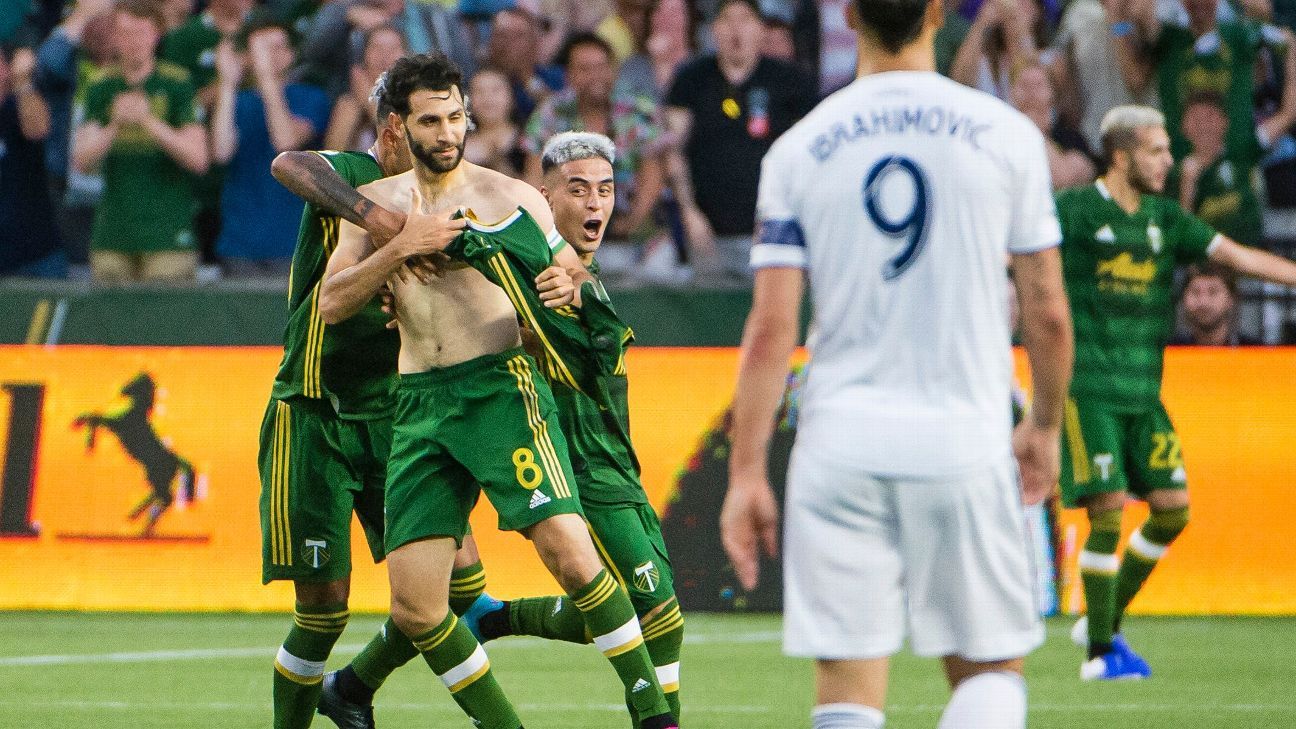 Cristhian Paredes and Diego Valeri electrified the 150th consecutive sellout crowd at Providence Park with late first-half goals, and the host Portland Timbers rolled to a 4-0 win over the LA Galaxy on Saturday night.

Paredes ended the night with two goals, his second one coming in the 81st minute. The frustrations of the night boiled over for the Galaxy in the 84th minute, when youngster Efrain Alvarez was sent off with a red card for blasting the Timbers’ Marvin Loria in the back with a kicked ball while Loria was on the ground.

Down to 10 players, the Galaxy had no one to defend Portland’s Jeremy Ebobisse when Jorge Villafana‘s cross found him for a header into the net in the 88th minute to cap off the Timbers’ win. Villafana also assisted on Paredes’ second tally.

Portland (9-8-4) is unbeaten in six straight games (4-0-2) and moved into a tie for the seventh and final playoff spot in the Western Conference. The Timbers have played one fewer game than Real Salt Lake, who sit on 31 points as well.

Timbers goalkeeper Steve Clark had six saves in a shutout, including one against Galaxy star Zlatan Ibrahimovic with Portland ahead 1-0 in the first half.

Ibrahimovic, the Galaxy’s leading scorer with 16 goals, took five shots, putting three on net. Clark came up big again in the 75th minute when he sent away a point blank shot from Uriel Antuna off Ibrahimovic’s cross.

Paredes put in Jorge Moreira‘s cross in the 37th minute via header, though replays showed the ball appeared to hit closer to his shoulder. Then Valeri crossed up Galaxy defender Daniel Steres with a nutmeg for a shot that found the net in the 41st minute.

Valeri, the Timbers’ captain, raised his total to six goals on the season and also had an assist.

The Timbers were without starting midfielder Diego Chara due to yellow-card accumulation, and have played just six home matches due to a remodel of their stadium that lasted until June, compared to 15 away games

WSL crowds up 200% on last year – director
Neymar, Danilo returns have Brazil dancing into World Cup quarterfinals with win vs. S. Korea
Giroud passes Henry as France’s all-time scorer
Shaqiri apologises to Swiss fans after 6-1 rout
Why Brazil vs. Croatia is also a battle of iconic kits and deeper meaning