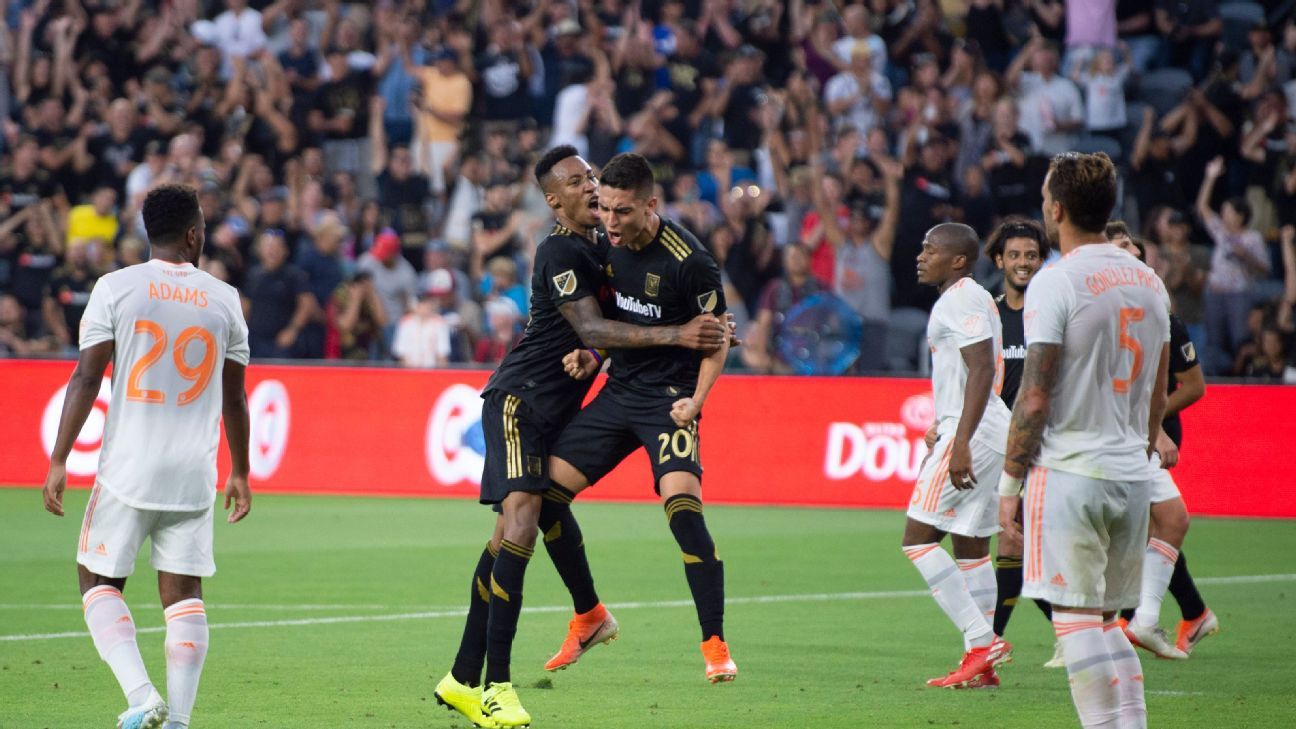 Los Angeles FC scored four goals in a 12-minute stretch of the first half, including one from Carlos Vela, the MLS leader in goals scored, to overcome an early deficit and then held on for a wild 4-3 victory Friday night over visiting Atlanta United FC.

Adama Diomande, Diego Rossi and Eduard Atuesta also scored in the first half as LAFC (15-3-4, 49 points) erased an early 1-0 deficit with their goal-scoring flourish.

The barrage started in the 33rd minute on Diomande’s strike. Rossi scored five minutes later, and Vela got on the scoreboard four minutes after that on a goal from the penalty spot.

It appeared that the rout was on when Atuesta scored in the 45th minute for a 4-1 lead, but Atlanta United stopped LAFC’s momentum when Josef Martinez scored two minutes into first-half stoppage time.

Atlanta United (11-9-3, 36 points) got a break early in the 51st minute to pull within 4-3 after an own goal following a fortuitous bounce off LAFC defender Eddie Segura.

LAFC remained the only undefeated MLS team at home at 9-0-1 and has won four consecutive MLS games in its own venue, although it did lose a U.S. Open Cup game at home to the Portland Timbers in that stretch. It rebounded from a 3-2 loss at the Los Angeles Galaxy last Friday.

Mo Adams also scored for Atlanta United 77 seconds into his first start with his new team. Adams joined Atlanta United from the Chicago Fire in a July 17 trade for targeted allocation money. It was Adams’ first career MLS goal in 27 games over the past two seasons.

Atlanta United saw its road losing streak reach six games. The team has not won away from home in an MLS game since May 15 at Vancouver.

The game marked a return to the starting lineup for Atlanta United midfielder Pity Martinez, who has been mired in a dispute with head coach Frank de Boer and was on the bench at the start of the previous two games. He was replaced in the 59th minute by Ezequiel Barco.

Vela’s goal, which came after he was fouled on the edge of the penalty area by defender Franco Escobar, was his 22nd of the season. He is on pace to top Josef Martinez’s regular-season goal-scoring record of 31 set last year.

Josef Martinez’s first-half goal was his 17th of the season, moving him into second place on the season goal-scoring list. It was also his eighth consecutive game with a goal, one off his league record that he shares with Diego Valeri.