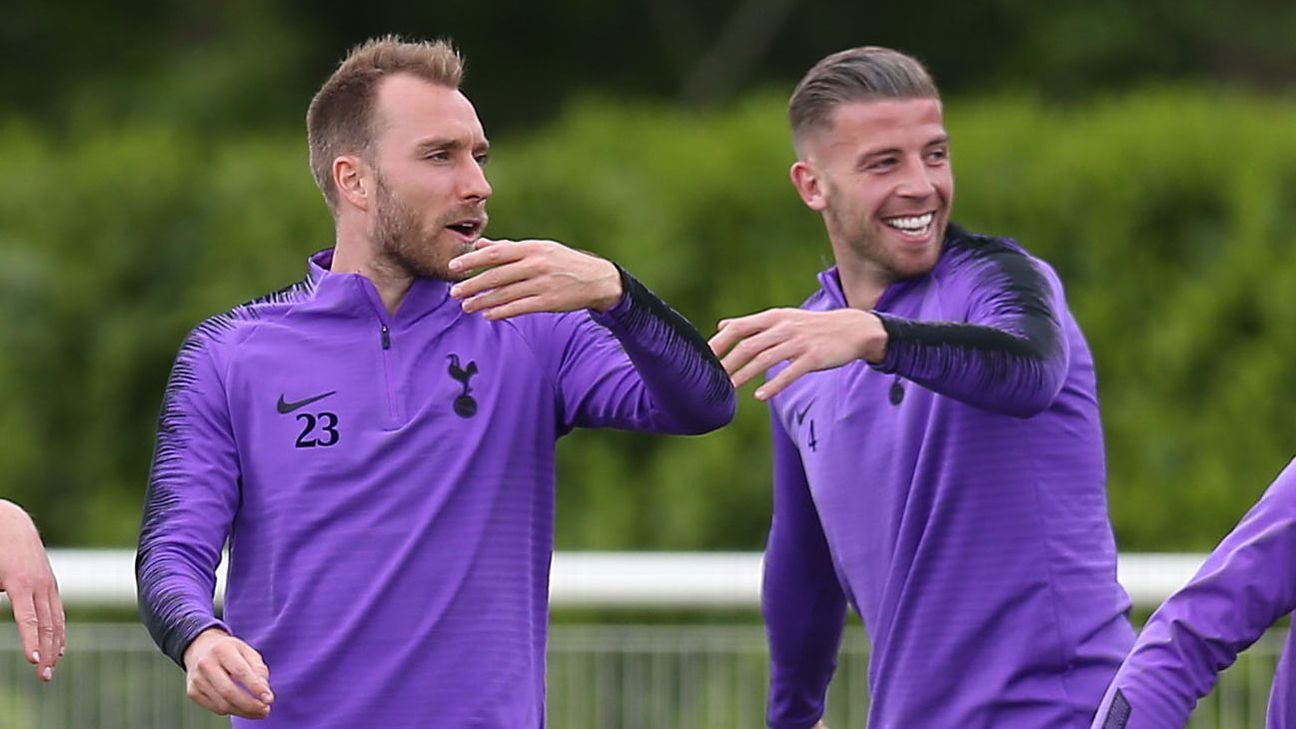 This has been a strange summer in the transfer market. The Gareth Bale-Real Madrid saga has become increasingly nasty. Neymar‘s desired divorce from PSG isn’t going as he’d hoped. It felt like Barcelona almost reluctantly spent €120 million on Antoine Griezmann, while Chelsea’s transfer embargo has taken a significant club out of the market.

Then there’s Tottenham. There have been two notable elements to their business over the summer. Firstly, that they’ve actually signed someone, dipping into their pockets at last to buy not only Tanguy Ndombele from Lyon but also the promising Jack Clarke, formerly of Leeds. Secondly, and more importantly, they’ve so far managed to keep a couple of key talents — without too much noise about it, either.

- O’Hanlon: How being good at set pieces can win you trophies
– Ogden: Kane’s goal an early message to Spurs’ rivals

One of them is Toby Alderweireld. That the Belgium defender remains at Spurs is a minor miracle. Last year, a senior Tottenham figure told ESPN that it was “inevitable” that Alderweireld would leave, and this summer that possibility was made even easier by the reported £25m release clause in his contract.

Given what £25m buys you these days, it’s remarkable nobody has yet come up with the money. But at 30, there’s no guarantee he’ll continue to be as good as he is for more than another season, and perhaps that is why clubs have been hesitant. Manchester United look set to spend three times that on the 26-year-old Harry Maguire, but they’re getting more time for their money.

The other is Christian Eriksen, and he’s a slightly different case. At the start of the summer Eriksen made a slightly understated but nonetheless fairly straightforward declaration that it was time to move on.

“I feel that I am at a stage of my career where I would like to try something new,” Eriksen told the Danish newspaper Ekstra Bladet.

“I have the deepest respect for everything that is happening at Tottenham and it would not be something negative to stay. But I have also said that I would like to try something new. I hope that something will be decided this summer. That is the plan.”

That probably should have been the signal for an almighty and undignified scramble for his signature. After all, here is one of the best playmakers in the world, a midfielder of subtle genius who also runs his tail off and is theoretically in the prime of his career at age 27, declaring himself available.

But there has been nothing. Or at least nothing of much significance. There could be any number of reasons for this: as Eriksen himself has said, there actually aren’t many clubs who represent a step up from Spurs these days, so it could just be that the small collection of superior options have other priorities.

It could be that his suitors are electing to wait for his contract to expire next summer. It could even be that his dips in form at stages last season have put people off. In other words, maybe football’s decision-makers don’t actually think he’s all that.

But there could be another reason. Tottenham have a collection of terrific individual players, but their success under Mauricio Pochettino has consistently exceeded their pooled talent and wage bill. The very fact that they reached the Champions League final in a season when they didn’t sign anyone, effectively going backwards as the rest of the football world tried to progress, shows that in spades.

This is very much a team, greater than the sum of its parts, a collective unit that flows as one, a set of jigsaw pieces that Pochettino has expertly fitted together to form something special. You only have to look at how seamlessly they adapted to the many changes in formation and injury issues they endured at the end of last season.

This is a process that has evolved over the five seasons Pochettino has been in charge. He has essentially created Tottenham Hotspur: the single being. It’s like they are one man that just looks like 11. The players are not so much individual humans but organs that make up a body, each one doing its part to help it live and breathe. Eriksen is a fundamental part of that and has been so since the beginning: he started Pochettino’s first game in 2014 and has missed just 10 of the subsequent 189 league contests since.

Maybe that is the reason for the lack of teams queuing up to buy him. In the real world, organ transplants are notoriously risky: they often don’t “take” in the new body, which isn’t massively surprising given they were only really intended to work in the old one. If you think of Eriksen as Tottenham’s kidney, or even their heart, then you can see why other clubs might be reticent. Would Eriksen be a different player in a different team and under a different manager?

Son Heung-Min fits into this theory, too. By any objective standards, he’s a superstar: an attacker who excels in three or four different positions, a goal scorer and a team player, a worker and a creator. His situation is slightly different because he’s never shown any outward signs that he wants to leave, but you never, ever see his name mentioned in the gossip columns, when he should really be targeted by the best and biggest.

Maybe, in the transfer window’s final fortnight, someone will swoop and take Eriksen. But at the moment, where we should be hearing the sounds of cash being counted and slammed on a negotiating table somewhere, instead all is quiet.