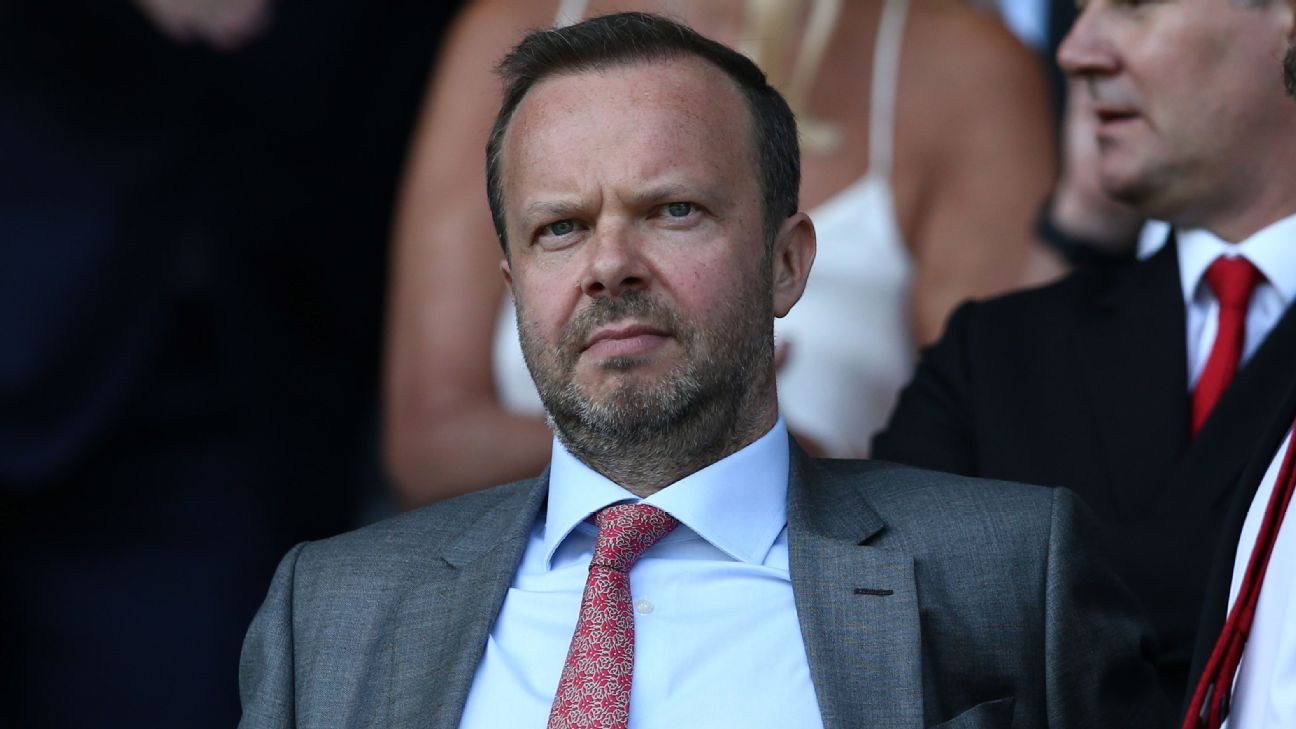 Manchester United executive vice-chairman Ed Woodward will not join the summer tour as the club continues to work on transfers with just two weeks to go before the deadline, sources have told ESPN FC.

Woodward had left open the possibility of meeting up with manager Ole Gunnar Solskjaer and the squad in Shanghai but will now stay in the UK. It will be the first time Woodward, who has returned from a short holiday in Marbella, has not joined a tour since taking over from David Gill in 2013.

Solskjaer is still hopeful of making two more signings before the deadline on Aug. 8 with a deal for Leicester defender Harry Maguire a priority.

United are also keen to add a midfielder and there remains interest in Newcastle’s Sean Longstaff and Sporting Lisbon’s Bruno Fernandes.

The future of striker Romelu Lukaku still needs to be resolved after he made it clear to the club he wants to join Inter Milan. The Serie A side had a £54m bid rejected last week. United value Lukaku at between £80m and £90m having paid Everton £75m for the Belgium international just two years ago.

United are also open to offers for defender Matteo Darmian. The Old Trafford have splashed out more than £65m to bring in Dan James and Aaron Wan-Bissaka during the window but there remains hope they will not be the only new additions.

Leicester want £90m for Maguire but so far United have been reluctant to meet their valuation. Sources have told ESPN FC that Maguire, who signed a new contract at the King Power Stadium last summer, would be keen to discuss a move to Old Trafford if the two clubs can agree a fee.

United have also not ruled out returning to Newcastle with a formal bid for Longstaff. Chief negotiator Matt Judge made an initial enquiry two week ago but was told it would take an offer of more than £50m to prise the midfielder away from St James’ Park.

United value Longstaff, who has made just nine Premier League appearances, at around £20m because of his lack of experience but there is still hope a compromise can be reached.

Another option in midfield is Fernandes, but Sporting Lisbon president Frederico Varandas has said the player will not leave for €62m.

The 24-year-old, who scored 31 goals in 50 appearances for Sporting in all competitions last season, including 20 in the league, has a €100m release clause and is tied to Sporting until June 2023.

Amid reports United have upped their bid to €62m to land the Sporting captain, Varandas told Portuguese TV RTP: ”I don’t know if there is one, or many [clubs] interested. There is talk of €55m, €62m, but I can say with certainty, that for those figures, he will not leave.”

Sporting are reportedly prepared to negotiate Fernandes’ sale for less than his release clause but would only agree a fee in the region of €70m upwards.

Varandas added that Fernandes, who is also a reported target of Liverpool, Tottenham, Paris Saint-Germain, Juventus and Atletico Madrid could leave late in the window.

“We are creating our group and we are going to be ready [for the upcoming season],” he said. “Unfortunately, we are subject to having players come and go until the last day [of the transfer window].”

Information from Adriana Garcia was used in this report.