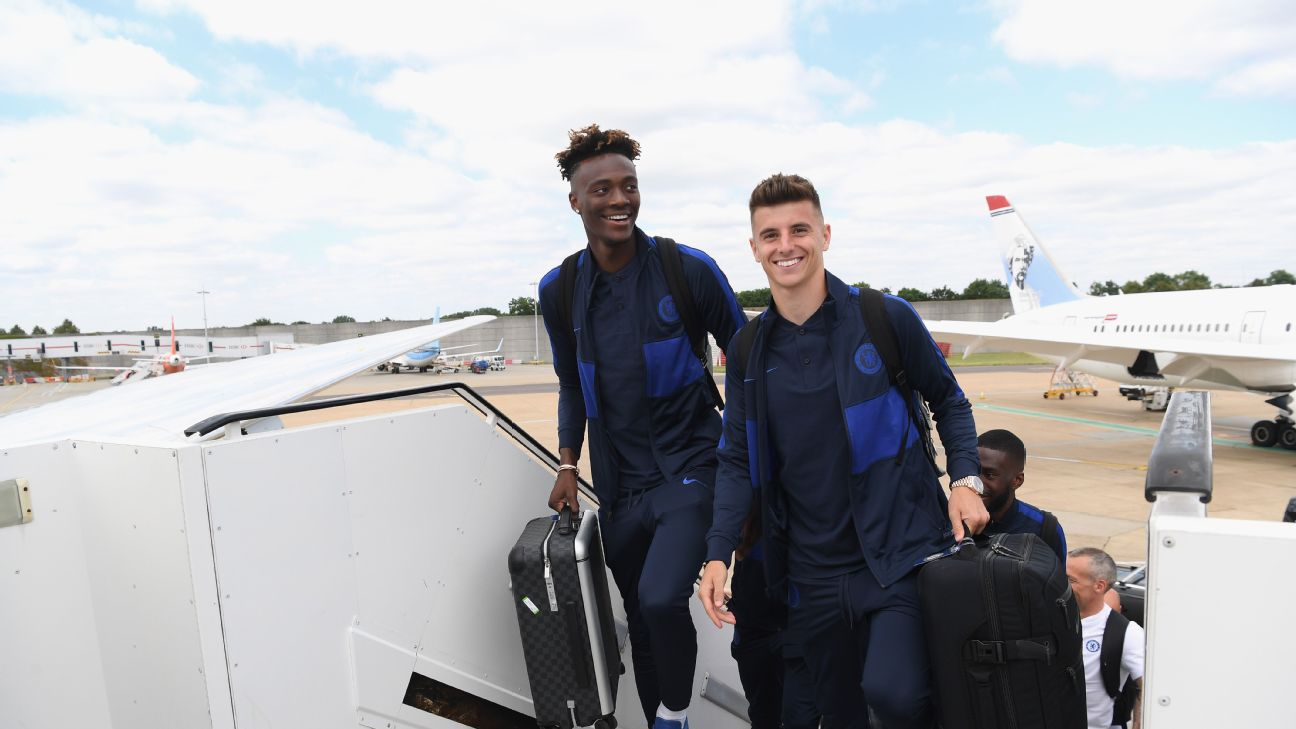 With Chelsea’s transfer ban limiting new manager Frank Lampard’s options to refresh his Chelsea team, he might have to dip into the pool of young loan talent that has been stashed around the football world in recent years.

Here are a few players returning to Stamford Bridge after loan stints who could help Chelsea and Lampard out this season:

If any player at Chelsea is going to learn from Frank Lampard, it’s Mason Mount. Much like his boss, Mount has a knack of timing a run from deep into the penalty area just so, and while he doesn’t have Lampard’s physicality or power of shot just yet, he still has time. He has broken double figures in both seasons that he has spent out on loan — at Vitesse Arnhem in the Netherlands and Derby County last season, under Lampard — which for a 20-year-old midfielder is pretty exceptional.

He has the talent, but will that mean he’ll get into the first team? Well, he has a pretty decent chance: Ruben Loftus-Cheek‘s Achilles injury will keep him out for the opening weeks of the season, meaning his direct competition probably will be the inconsistent Ross Barkley and Mateo Kovacic.

“Mason’s part of the first-team squad this year and it’s time for him,” Lampard said recently.

Expect to see plenty of Mount this season.

Chances of making the first team: 8/10

Opportunity knocks. The area that Chelsea’s transfer ban has impacted the club the most is at centre-forward, because with Alvaro Morata and Gonzalo Higuain banished, Chelsea’s only two senior No. 9s are Olivier Giroud, who managed only two league goals last season, and Michy Batshuayi, who was loaned out twice last season (Valenica and Crystal Palace). Neither is a guarantee to produce goals, which might mean Lampard has to be creative by, for example, trying Pedro as a false nine.

Lampard’s other option is giving Abraham a try. At the moment, there is a slight fear that the gangly Londoner falls into that category of being excellent in the Championship but not quite good enough for the Premier League. He excelled on loan at Bristol City in 2016-17 and was a big reason Aston Villa got promoted last term, but he only managed five goals for Swansea the season before while on loan in the top fight. Admittedly, that was in a poor team, so he could do better surrounded by a higher calibre of player. He surely will have the chance to do so.

Chances of making the first team: 8/10

There’s a grace to Fikayo Tomori, who also starred last season under Lampard at Derby, that you don’t often see in defenders. He is the sort of centre-back who will arrive, as if from nowhere, on the scene of a burgeoning attack to relieve his rival of the ball in the calmest manner possible. He has the mental and technical gifts, but the question about the 21-year-old is whether the Premier League will be too much for him physically: He is relatively short for a centre-back at 6-foot-1, and while his other skills have hitherto made up for that, they might not be able to do so in the top flight.

The chances are he will make the squad for the start of the season, but getting into the first team might be more of a challenge, particularly if Lampard, as expected, only uses two centre-backs. Antonio Rudiger, David Luiz and Andreas Christensen will be ahead of Tomori in the pecking order, but Tomori easily could dislodge the latter as the season goes on.

Chances of making the first team: 6/10

This does feel a little like cheating, given that Zouma is a few years older than the other returning candidates and has been around for some time. That said, he is still just 24, and he was part of Chelsea’s loan diaspora last season. He did pretty well at Everton, to the point that they have reportedly been trying to get him back all summer, and Lampard has spotted his quality too.

“I want him here, simple as that,” Lampard said recently of Zouma. “We are competitive with the centre-backs we’ve got in the team. He had a very good season at Everton, and I understand why they want him, but he’s a Chelsea player and I want him. He’s working really hard, and if he competes for a position and plays well this season, then he plays.”

Chances of making the first team: 5/10

Most sets of fans get excited about a talented young player coming through the ranks, and Chelsea’s are no different: This time last year, their big obsession was Callum Hudson-Odoi, and this summer it looked like Reece James would be the target of their affections. A right-back who was one of the best players in the Championship when on loan with Wigan last season, James easily could be the long-term successor to Cesar Azpilicueta. Crystal Palace seem to think he is decent, anyway: They reportedly had a £20 million bid for James rejected recently, which in turn should tell you Chelsea rate him too.

The problem is that James suffered ankle ligament damage while playing for England at the Toulon Tournament, and he recently had surgery that will probably keep him out for a decent chunk of the coming months. Whether he plays when fit again will very much be dictated by circumstance: If Chelsea are struggling, they might be looking for some young blood to pep up the team. But he might well just be loaned out again in January.

Chances of making the first team: 4/10

On the face of things, a player who was in and out of the Newcastle team last season wouldn’t seem like an obvious fit for a side with designs on Champions League qualification. Kenedy, 23, has obvious talent though, with a whipcrack left foot and bags of pace, the problem being that he hasn’t applied that talent particularly consistently.

Lampard is smart and realistic enough to know that, given their situation, he has to take what he can, as he said in so many words.

“I need to assess the players for as long as I can in preseason to make sure we pick the right squad,” he said after their recent friendly against Kawasaki Frontale. “If Kenedy continues to show the attitude and play the way he did today, he is making a great case to stay, having been on loan in recent seasons.”

Chances of making the first team: 3/10