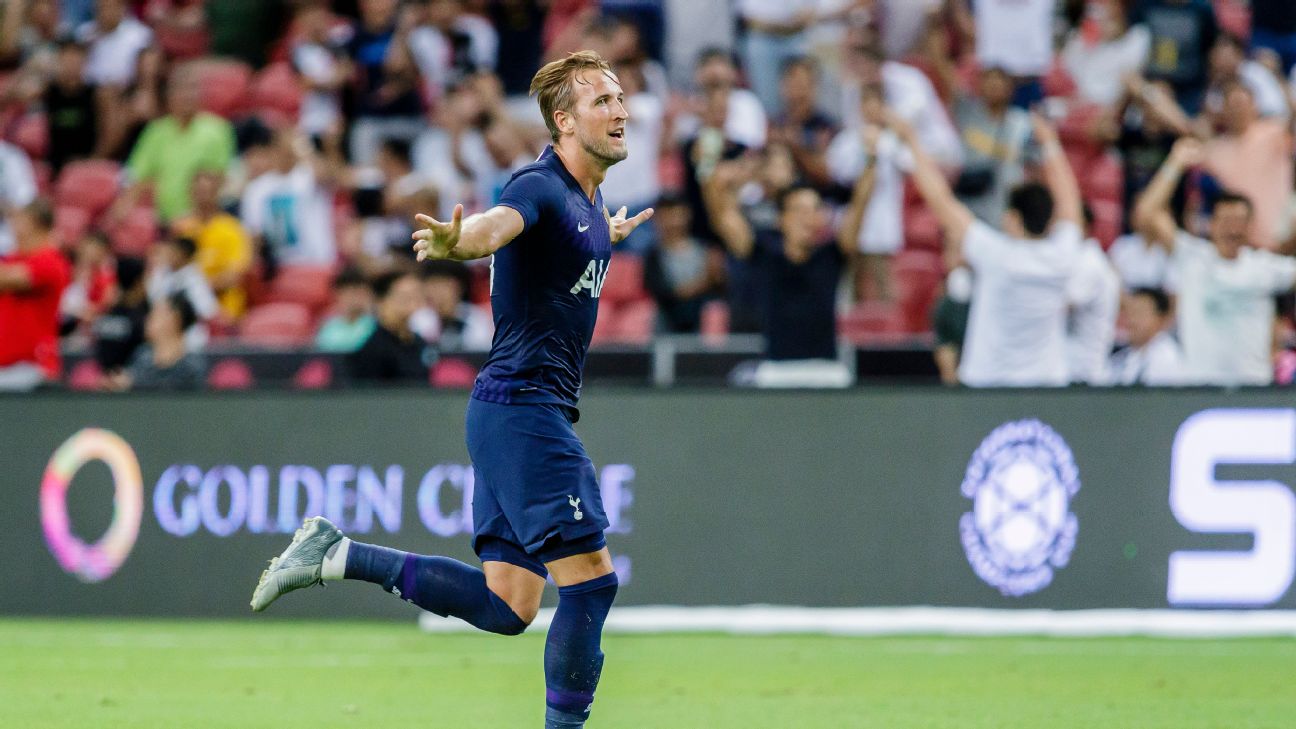 SINGAPORE — As Harry Kane lashed in a spectacular goal from the halfway line in stoppage time at the end of Tottenham’s 3-2 International Champions Cup win over Juventus in Singapore, it was clear that the forward’s Champions League hangover is only going to affect him off the pitch.

The England captain, who will celebrate his 26th birthday on Sunday, cut a forlorn figure just seven weeks earlier, having returned from injury for his first game in almost two months to play in Tottenham’s Champions League final defeat against Liverpool in Madrid.

– International Champions Cup: All you need to know
– Premier League fixtures 2019-20 in full

On that night in the Estadio Metropolitano, Kane was a shell of his usual self. He was off the pace and clearly still hampered by the seven-week layoff caused by the latest ankle injury of his career. Virgil van Dijk had never had such a straightforward game against the Tottenham striker.

Kane was in reflective mood ahead of his return to preseason action in South-East Asia, speaking about how Madrid would continue to haunt him, but the audacious goal against Juventus was a good start at drawing a line and starting afresh.

“It was a tough one to take,” Kane said about the defeat against Liverpool. “We did extremely well to reach the Champions League final and, of course, when you get to those big games and you don’t quite perform the way you know you can, that’s always the bit that hurts you the most. We know it was there for the taking and that’s something we have to deal with and something we’ve had to think about over the summer.

“It’s a hard one to get over, but all in all, with everything surrounding us — starting the season at Wembley, and things like that, I think we did extremely well to do what we did, and it’s now given us the confidence and belief that we can be in the big games, the Champions League finals. So it’s down to us this season to try and perform again.”

Kane’s selection in Madrid was perhaps the biggest call of Mauricio Pochettino’s time in management. Without Kane, Spurs had made it to the final, with his replacement, Lucas Moura scoring a hat trick in the remarkable 3-2 semifinal second-leg win against Ajax in Amsterdam. In Kane’s absence, Moura, Son Heung-Min and Fernando Llorente all rose to the occasion, with Dele Alli also rediscovering the attacking form that had been absent for much of last season.

But when your main striker has scored so consistently — last season’s injuries prevented Kane from breaking the 20-goal barrier in the Premier League for a fifth successive campaign — it would have been a huge call by Pochettino to overlook Kane in Madrid, despite his not having played for seven weeks.

In hindsight, though, does Kane think that Pochettino made the right decision?

“That’s football, that’s the game we play, the world we live in,” Kane said. “I think everyone has an opinion, so it is what it is.

“The gaffer made a decision on what he thought was the best for the team and it obviously didn’t work out in our favour. But as a team, we all look at each other and we always win and lose together, and unfortunately that one didn’t go our way.”

Asking Kane to reflect on his performance in Madrid is tricky, however, because he admits that he has not even watched the game over again.

“No I haven’t,” he said. “I don’t want to watch it. As a player, you know when you could have done better, you could have done more. Like I said, it’s a hard one, because it’s probably one of the biggest games we’ll ever play in our careers and to let it slide by is always a tough one to take.

“It’s an experience we need to learn from and I’ve said before, it’s not the easiest final to get over, but with the belief we have in the squad, we know we’re capable of doing that.”

Bringing a crowd to its feet in Singapore with a moment of individual brilliance is one way to start the process. Kane admitted his strike in the National Stadium was “probably” the best in his career — and there have been some good ones — but the next challenge is to do it when it matters.

“Wayne [Rooney] has done it a few times so I’ve got some way to go to catch him,” Kane said. “When you watch [David] Beckham and Rooney do it, you try it yourself, especially when you are younger and I have tried it a few times and it hasn’t come off but, who knows, hopefully it will be the start of me getting a few of them.

“It being in a friendly means it didn’t mean as much, but in terms of the strike it was right up there, so the next aim is to try and do it in a competitive match, either in the Premier League or Champions League. That would be nice.”

Looking ahead is clearly the key, however, for a player who has yet to win a major honour for club or country. And with the new season less than three weeks away, Kane admits that the time has come for Spurs to look the future and make it a successful one.

“You have to move on,” he said. “Those type of losses [Liverpool] always stay with you for a while and I don’t think you ever fully get over them. But it makes you stronger, it makes you more determined, it builds the fire in the belly to get back there and, when we do hopefully get back there, prove a point.

“We’ve had the summer to reflect and move on, and I think before every season, you’re more excited about the year ahead than looking in the past. We go into every season trying to win, but we haven’t done so yet.

“It’s down go us, there’s no excuses, there’s nothing we can say. As a team we need to do better in the big games and, when we get opportunities, like we did last year, we have to take them. It starts now, the hard work, determination and focus for a big season and hopefully we can win that trophy.”