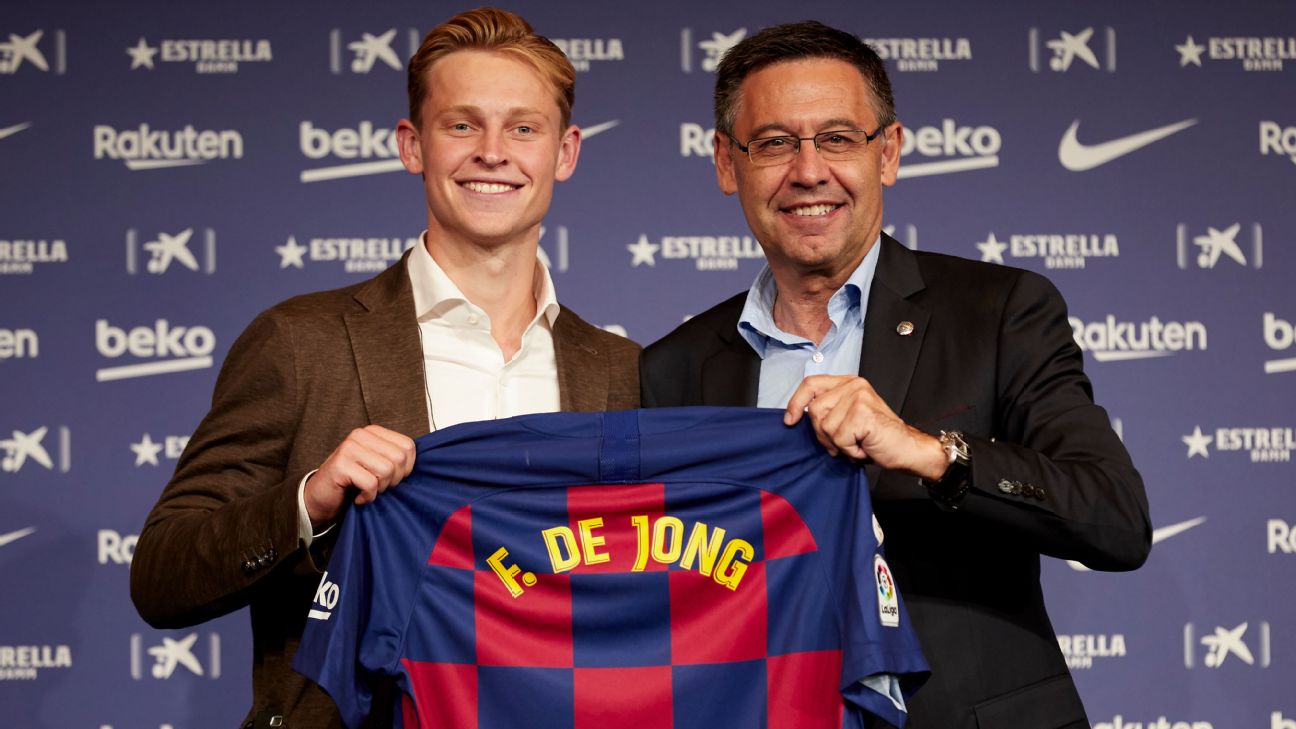 Frenkie de Jong revealed that a visit from Barcelona president Josep Maria Bartomeu in Amsterdam convinced him to sign for the Spanish champions ahead of Paris Saint-Germain and Manchester City.

De Jong, 22, agreed to leave Ajax for Barca in January but the deal was only completed on Friday, when he signed a five-year contract before being presented in front of 20,000 supporters at Camp Nou.

Barca had feared they’d lost out on the Dutch midfielder at one point, prompting Bartomeu, among others, including sporting director Eric Abidal, to make the trip to visit him in the Netherlands to push the €75 million transfer over the line.

“It was a hard time actually because all the clubs are telling you things and you don’t even see anything [clearly] anymore,” De Jong said in a news conference when asked about how tough it was to decide which club to sign for.

“But there was one moment. The president and all the guys [on the board] came to Amsterdam and that really convinced me — so all the credit to those guys.

“I can’t share all the things [Bartomeu] said to me, but let’s say that he told me they have a lot of confidence in me, that they think I will be a key player for Barca in the future and that I can do great things now.”

Asked if Bartomeu had offered him more money to turn down PSG and City’s interest, De Jong insisted his final call was based purely on football reasons.

“When the president and the members of the board came to Amsterdam, we only talked about football,” he added. “In a meeting, I never talk about money. I leave that up to my agent. It was only football.

“Of course I was thinking about all the clubs who were interested in me, that’s the normal process. First your agent talks to them, then you do, you’re thinking about the options, what’s the best for me.

“But Barcelona came to me, they convinced me, they had a good plan. In the end, the decision was easy to go for Barcelona. It has always been my dream since I was a kid to play for Barca one day. When they [showed they] were really serious about me, the choice was easy.”

De Jong, who has not stopped smiling since he arrived in the city on Thursday, encouraged former Ajax teammate Matthijs de Ligt to join him at the club. Sources have told ESPN FC that Barca have an agreement with the Dutch club, but they are still waiting for the centre-back to make his final decision.

“I was expecting this question,” De Jong laughed. “Of course I would be happy to see [De Ligt] but it’s not up to me, he has to make the decision with his family and his agent. We will see where he goes.”

Speaking before De Jong, Bartomeu reaffirmed what he told ESPN FC in an exclusive interview in April, that he knows where De Ligt will be playing his football next season, but he can’t say anything at the moment. Juventus, Paris Saint-Germain and Manchester United have also been linked with the player.