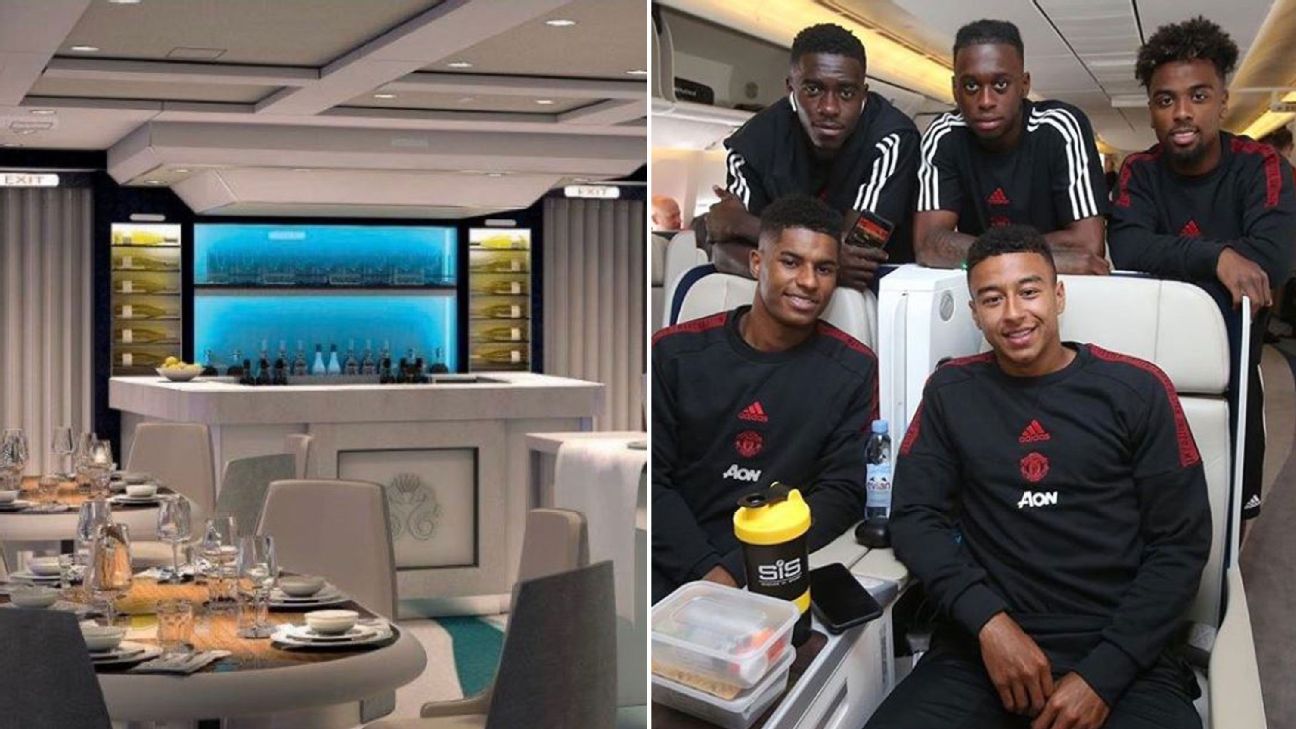 Jump to: Barcelona’s new ‘sash’ a tribute to La Masia or Crystal Palace? | Ibrahimovic names all-time XI. You can guess where this is going…

Manchester United have started their preseason tour with a record-breaking flight on a plane dubbed “the world’s most luxurious jet.”

Ole Gunnar Solskjaer and his squad left Manchester for Perth, Australia on Sunday on a customised Boeing 777. The flight was the longest non-stop trip to depart Manchester airport.

The Crystal Skye aircraft has been reduced from 300 seats to accommodate just 88 first-class passengers and took two years to complete.

It comes equipped with a 300-bottle wine fridge, room for an executive chef, a full bar and a restaurant that can seat 24. To charter the plane for a non-stop flight from Paris to New York costs around $500,000.

It’s the same plane that the Boston Red Sox used when they flew to the UK for last month’s MLB London match against the New York Yankees.

United are scheduled to play two games in Perth before heading to Singapore, Shanghai, Oslo and Cardiff before the new Premier League season kicks off. They start against Perth Glory on Saturday before facing Leeds United, Inter Milan, Tottenham, Kristiansund and AC Milan.

Midfielder Paul Pogba is part of the travelling group despite his desire to leave Old Trafford this summer. The France international, who has three years left on his contract, has said he is looking for a “new challenge” amid interest from Real Madrid and Juventus.

Still, why should wanting out of the club exclude him from taking a seat on the luxury flight?

– Peruvian pals cross continent for Copa America final
– Pogba responds to Ibra’s #bottlecapchallenge in style
– What did Neymar say to Messi in their brief reunion?

👕 @FCBarcelona away kit 19/20
💛 The return of an iconic football classic to commemorate La Masia 40 years
🔵🔴 pic.twitter.com/0nn96cD8fF

Barcelona have unveiled their new away kit for 2019-20, which they are using to commemorate the 40th anniversary of the opening of their famed youth academy.

La Masia began in 1979 when an old Catalan farmhouse near the Camp Nou was converted into on-site accommodation for Barca’s young stars of tomorrow.

The sash design harks back to the classic yellow alternate strip of 1979, the season that Barca won the European Cup Winner’s Cup.

It’s also looks more than a little bit like Crystal Palace’s 2016-17 away kit. That could just be a happy coincidence but, given that the area of Croydon where Palace are based produces so many young footballers that it is known as “the concrete Catalonia,” perhaps it is a nod from one breeding ground of talent to another. Probably not, though.

Ibrahimovic names all-time XI. You can guess where this is going…

Zlatan Ibrahimovic has spent a little time hand-picking a fantasy XI of his favourite players. Given his impressive CV and the sheer amount of greats he’s had the privilege to play alongside over the course of his career, it stands to reason that Ibrahimovic’s team would be chock full of legendary names.

Therefore, it should come as no surprise that Zlatan FC (aka “The Hungry Lions”) boast a roster that consists of 11 Ibrahimovics with 11 different hairstyles — all coached by Zlatan Ibrahimovic.

We honestly don’t know how we could have expected anything else.

Szczesny: I lost €100 bet with Messi over pen
Sources: Bid to be submitted for NWSL’s Thorns
Spain: ‘Nothing to celebrate’ despite WC progress
FIFA rejects France VAR protest over nixed goal
Mexico’s Martino: No fear for must-win match