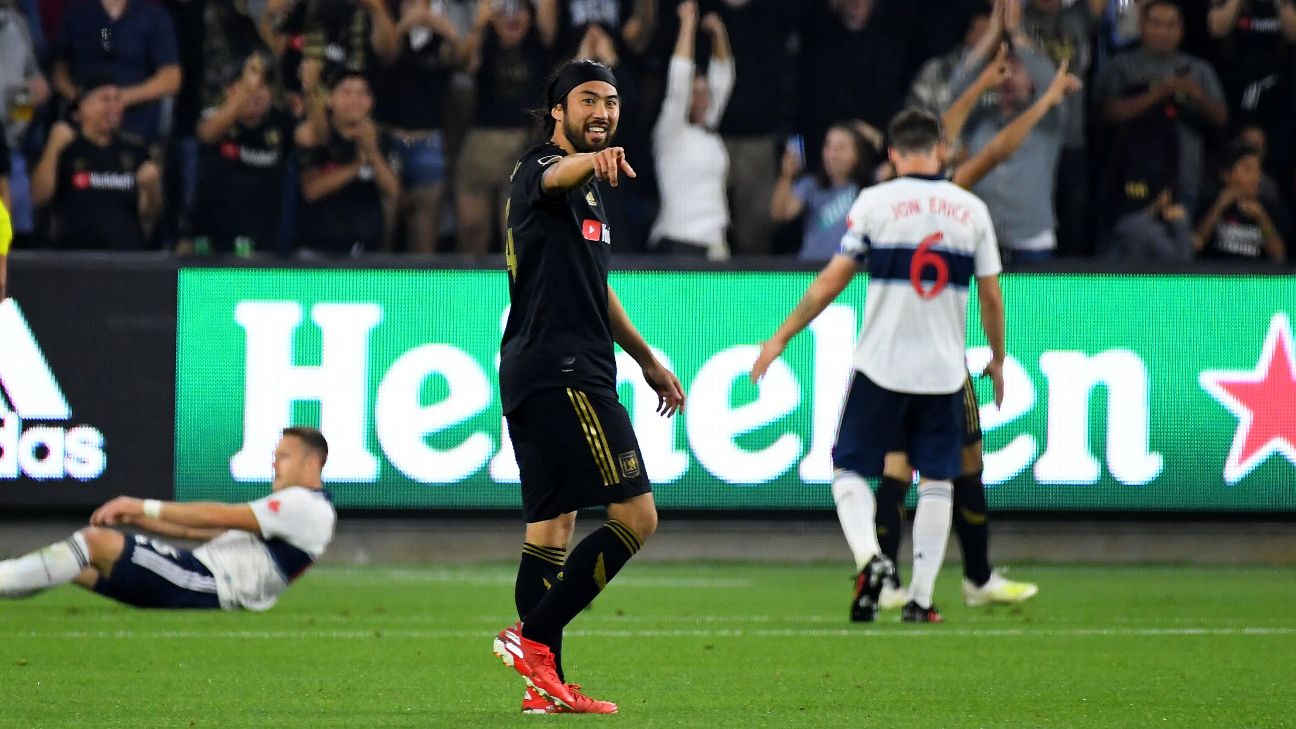 A schedule filled with midweek games stretched the resources of teams across Major League Soccer this round, leading to silly mistakes that really shouldn’t happen.

With all the majesty of a Zlatan IRBahimovic wonder-strike from midfield, let’s get ranking.

LAFC were back on their … good stuff. After a strange loss in Colorado, Bob Bradley’s team only put in 11 goals in two games this week against Western Conference opponents. The words “historically dominant” are starting to resolve into view and there’s no reason yet to doubt LAFC will march to a title.

No one beats NYCFC at home. Well, almost no one. The Sounders didn’t do it on Wednesday, but Portland somehow managed to hand Dome Torrent’s club just their second loss of the season overall and their first loss in the Bronx in a scrappy game at Yankee Stadium on Sunday.

Not only did Zlatan Ibrahimovic score twice and lead the Galaxy to a needed win against a weakened Toronto team, he did it wearing a shirt with his name spelled wrong. Maybe LA should consider leaving “Irbahimovic” on the Swede’s jersey just in case it’s good luck?

FC Dallas continue to hang around just behind the top tier of teams in the Western Conference, thanks to the young talent in the roster and the contributions of veterans like Santiago Mosquera. Mosquera’s early tally was the game-winner in an Independence Day win over DC.

Five Stripes, one point from a double-game week. Wednesday’s humbling in Chicago certainly leaked into Sunday’s tilt against the Red Bulls — not just because of fatigue, but because Atlanta was missing Leandro Gonzalez Pirez via suspension. United thought they had a win against New York, only to have it snatched away by poor defending.

The Quakes watched a six-game unbeaten run — four of them wins — end in a midweek trip to Minnesota. It took an added time goal from Danny Hoesen to get back to winning ways at home against RSL on Saturday. Do San Jose have the staying power to go on another strong run of form?

The Red Bulls get the Shrug of the Week Award after they took a 4-0 thumping in Houston on Wednesday, then executed a late comeback to earn a draw after they were forced to play the same day they arrived in Atlanta on Sunday due to travel issues. And next week is the Hudson River Derby!

It was a Texas-sized nightmare for the Black and Red in Frisco on Thursday. There’s some relief that Wayne Rooney‘s red card was downgraded to a yellow, but the chances seem good that Luciano Acosta might miss more than a game after his stamp on Paxton Pomykal in the loss.

The end of the Casey bump means the Rapids remain in last place in the West and fall below .500 at home. The danger is that a disappointing home loss damages the confidence of a team just starting to believe in itself. This is when Casey’s real work — and his audition for the full-time job — really begins.

The Bruce-clamation project (these are definitely getting better) continued in Colorado on the Fourth of July. Commerce City is never an easy place to win, even when the Rapids are bad — and the Revs now have a chance to jump into a playoff spot next week with a win against a scuffling DC United team.

The Loons took six points from two games this week and now have a three-game winning run going. The US Open Cup tilt in midweek makes things a little more complicated for Adrian Heath, but the Loons have climbed all the way to fourth in the West and are starting to look like … if you can believe it … the real deal.

It couldn’t have started any better for the Impact versus Minnesota United thanks to Anthony Jackson-Hamel‘s goal 27 seconds in. That start didn’t lead to a win, though, and the Impact will be kicking themselves for losing to Loons team minus several starters. Next up, a rivalry clash with a TFC team that will have its big names back.

The Portland creep up the table continued this weekend after a road win in the Bronx over NYCFC. It was a momentous win for several reasons: One, NYCFC hadn’t lost at home in 2019. Two, NYCFC had only two losses on the year in total. Three, the last time NYCFC lost a game it was the first week of Spring.

A swing East for two games this week delivered a loss in New York City and a win in Columbus for the Sounders. The biggest difference between the two games was Nicolas Lodeiro, who returned from Copa America duty and a penalty and late winner at the death to secure the win in Ohio.

In a span of six days, the Dynamo will have played against the league’s worst team, FC Cincinnati, and the league’s best team, LAFC. Houston suffered the shame of being the first team to lose to FCC since May 11. That doesn’t bode well for next Friday’s tilt against the Black and Gold.

The Lions just finished a weird week in which they faced the Union in back-to-back games separated by four days and got a single point for the effort. Dom Dwyer scored in the weekend draw, which is a good sign that the forward can reclaim his form after paternity leave.

RSL nearly played their way to a busy, unbeaten week, but a late concession in San Jose ruined a chance to extend a three-game unbeaten run. There’s some extra sting on the loss because it vaulted the Quakes back over Real Salt Lake and into the playoff places. Will this one matter by the end of the year?

The most notable thing about the Whitecaps this week is that they were LAFC’s latest victim. Conceding six goals is not good, but neither is anyone surprised.

If Sporting is going to get back to it accustomed level, getting out of last place is the first step. A win from two matches this week was enough to do just that, though the progress from the win over Chicago will need to ramp up significantly. Strange stat: Daniel Salloi, the man who led Sporting in goals last year, has yet to score in 2019.

The Reds interregnum is finally over with the Gold Cup done. How quickly Greg Vanney can reintroduce Michael Bradley and Jozy Altidore is critical to getting the season back on track. Despite last year’s struggle, seventh place is not good enough for a team that aims to win championships every year.

The Fire are our “Whiplash Team of the Week” after beating the defending champs 5-1 on Wednesday (!) and falling to Sporting Kansas City 1-0 on Saturday. The short rest and the trip to Kansas City make it tough to be tough on Chicago, but that’s a big difference.

The Gold Cup is over. Wil Trapp and Gyasi Zardes will be back with the team, presumably for the trip to Orlando next week. That’s the best possible news for the Crew who are tied with *checks notes* an expansion team for the most losses in Major League Soccer this season.

FC Cincinnati got themselves big win over Houston on Saturday, the kind of win that lets everyone breath again. Not a season-saving win, but a “hey, we can actually win, what a feeling” kind of win. The kind of win that maybe could turn into a winning streak kind of w… okay, maybe that’s a step too far.