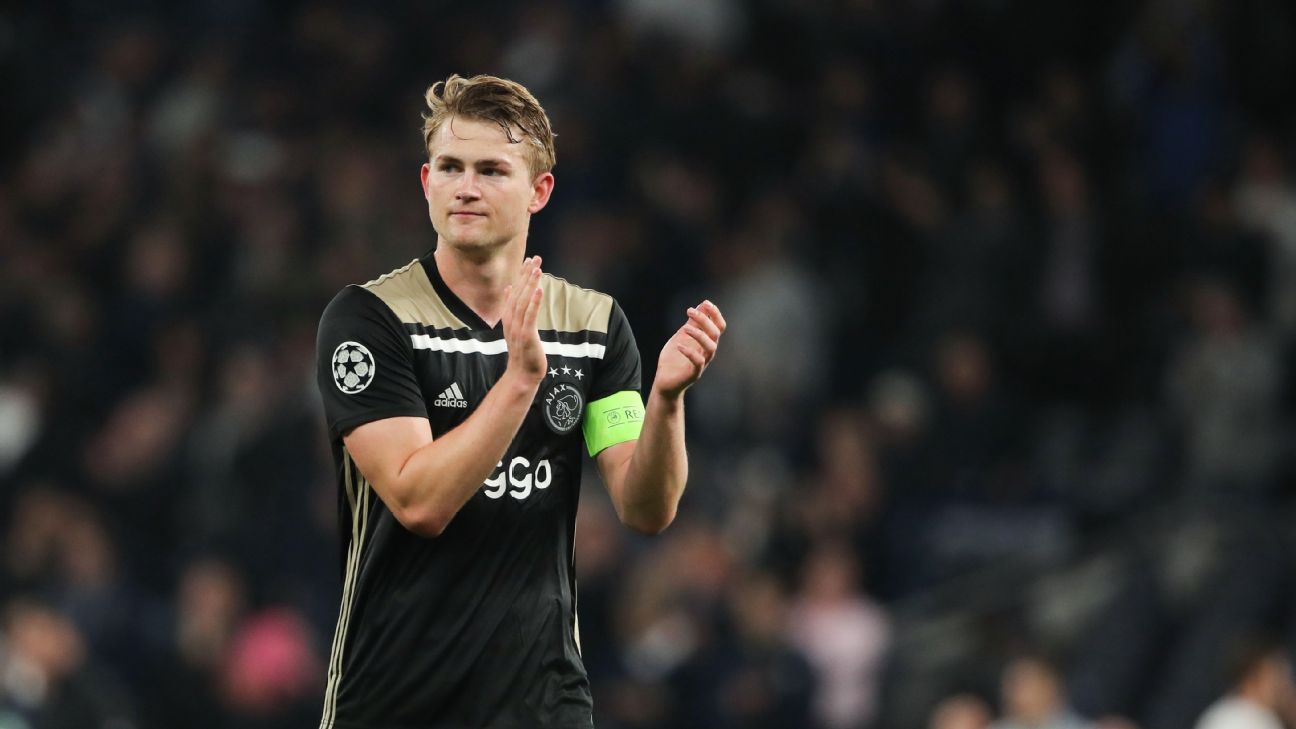 It may feel like this transfer saga has dragged on and on, but really, the window has been open only a week, and it now seems as though Matthijs de Ligt has chosen his next destination.

Many moons ago, the Ajax captain looked certain to follow Frenkie de Jong to Barcelona. Just a few weeks ago, sources told ESPN FC that Paris Saint-Germain had moved into pole position for the 19-year-old’s signature. Now, Sky Italia’s Fabrizio Romano is reporting that the Netherlands international “has agreed personal terms with [Juventus].”

Romano actually attributes quotes to de Ligt’s agent, Mino Raiola, confirming the move to the eight-time defending Serie A champions: “Matthijs has agreed personal terms with Juve. We’re waiting for them to complete the agreement with Ajax soon.”

Now, there’s just the matter of meeting Ajax’s €75 million valuation, which could be complicated by this next bit of news …

08.00 BST: Brazil international Filipe Luis says he has yet to make a decision regarding his future. Filipe Luis has not renewed his contract with Atletico and is a free agent this summer.

Atletico have offered him a one-year contract extension while the veteran has been linked with Barcelona as a back-up to Jordi Alba. Filipe Luis is also a target of Brazilian club Flamengo.

The 33-year-old left-back told Lance after winning the Copa America with Brazil on Sunday: “The first thing I’m going to do is to go to Atletico, speak to them, see what the club needs and what they don’t, what people they choose for the future. Then I will have to take a difficult decision, but it’s one that I must take.

“I have offers and I will make a decision with calmness. I hope I can take the best decision with a cool head. I expect a decision to be made in the next week. I have been at Atletico eight years, I have a duty to speak to them and from then on, we shall see. A return to Brazil? I would only go to Flamengo. I’ve been a Flamengo fan since I was a boy. But the biggest decision I need to take is whether I remain in Europe or return to play in Brazil.”

It seems money could be tight this summer for the Old Lady, with The Times reporting that Juventus are also readying a £120m bid for Paul Pogba — in addition to the stack of cash they’ll need to send to Amsterdam if they’re going to bring in de Ligt as well.

Raiola — who also happens to be Pogba’s agent — told the Times last week that he was “in the process” of arranging the France World Cup winner’s exit from Manchester United, but this report states that the Red Devils “are resolved to resist any efforts” to take Pogba from Old Trafford.

Regardless of whether United would actually entertain the sale of the 26-year-old, an offer of £120m isn’t going to be enough to test their resolve.

And, as we alluded to earlier, the Times suggests that the massive wages given to free signings Aaron Ramsey, Adrien Rabiot and Gianluigi Buffon — in addition to the enormous pay packet of Cristiano Ronaldo and his nine-figure transfer fee from last summer — means the Bianconeri might not have the financial wherewithal to afford Pogba.

Newcastle will have to turn their attention for a new gaffer elsewhere after Rangers boss Steven Gerrard and Nice manager Patrick Vieira rejected the Magpies’ overtures.

– When does the transfer window close?
– Premier League fixtures 2019-20 in full
– Who has qualified for Europe from the Premier League?

According to the Mirror, Newcastle owner Mike Ashley sent out feelers to the camps of both Gerrard and Vieira, but they indicated they were happy at their clubs for the moment.

Ashley is stuck trying to replace Rafa Benitez, who left the Premier League side for a lucrative offer in China. Ashley is also frustrated by slowing of a potential £350m takeover by Sheikh Khaled bin Zayed Al Nehayan.

Both Gerrard and Vieira are preparing for the second season with their respective campaigns.

– Southampton boss Ralph Hasenhuttl has been informed by midfielder Mario Lemina that he wants to leave the clubs, reports the Mirror. The  25-year-old had an injury-hit season at St Mary’s last year after joining from Juventus in the summer of 2017 for £15m and has told the club he’s ready to move on, telling reporters: ”They are giving me the opportunity to be able to go elsewhere.”

– Liverpool are leading the pack of suitors looking to sign England Under-17 midfielder Harvey Elliot from Fulham, according to the Telegraph. The academy project recently rejected a scholarship from his boyhood club, says the report, setting up a dream move to Anfield despite the fact he can’t officially turn pro until his 17th birthday next April.

– Frank Lampard‘s arrival as Chelsea boss could be good news for his former Blues and England teammate Ashley Cole. The Sun says Lampard, who brought Cole in to aid his Derby team’s run to the championship playoff final this season, wants Cole to join his coaching staff after the 38-year-old called time on his career at the end of the 2018-19 campaign.

– Former Philadelphia Union midfielder Roland Alberg is on trial at A-League club Adelaide United, according to News Corp. The 28-year-old spent last season at Panionios, but he made only three appearances for Greek Super League side.