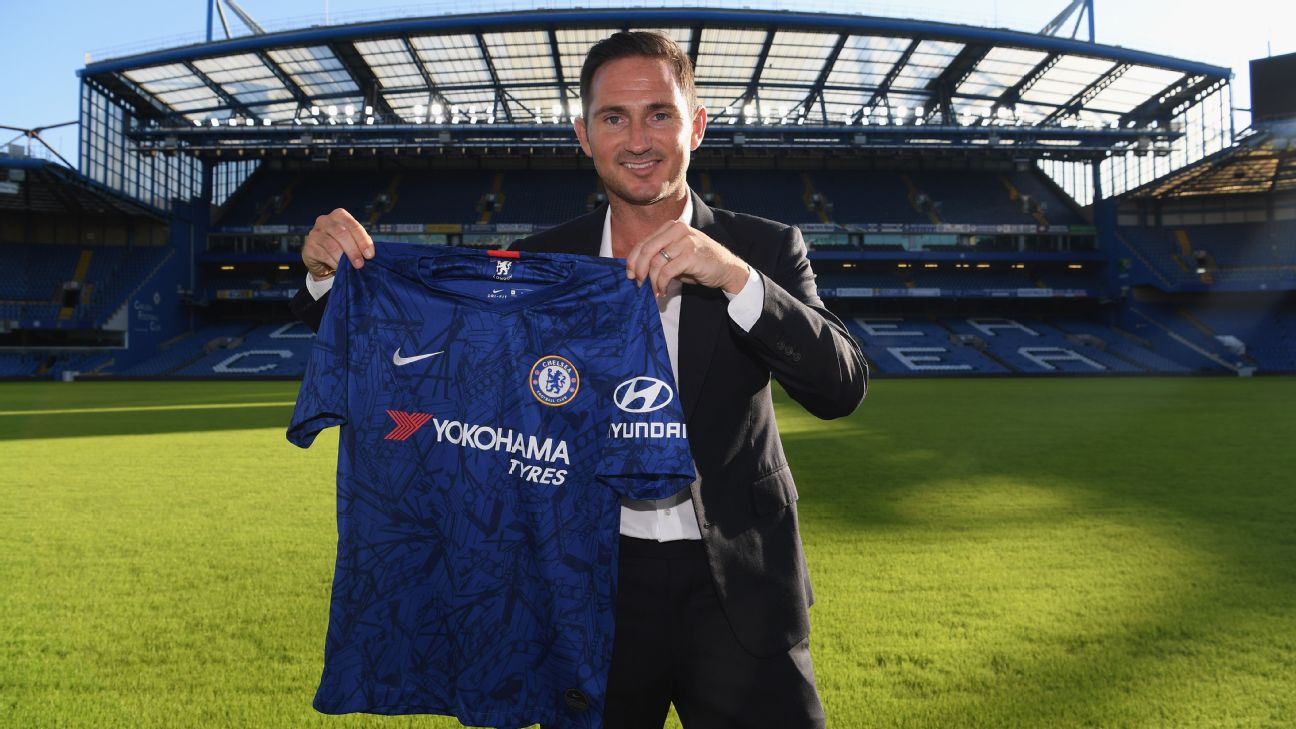 When Frank Lampard took his first steps in management and landed the job at Derby County in May 2018, the fairytale scenario was that the former Chelsea and England midfielder would end up back at Stamford Bridge at some point, only this time in the seat previously occupied by the likes of Jose Mourinho and Carlo Ancelotti. But nobody, not even Lampard himself, could have imagined he would be fast-tracked into the job of his dreams just a year after starting out as a manager.

Despite one season in the Championship with Derby that saw the 41-year-old achieve only the bare minimum of what was expected of him, a place in the end-of-season playoffs, Lampard now finds himself with the title of Chelsea head coach. For that he can thank the unique situation in which Chelsea find themselves this summer, with the club starting a two-window transfer ban that undoubtedly helped Lampard secure the post made vacant due to Maurizio Sarri’s departure for Juventus.

– Barnwell: Can Chelsea’s loan army come to the rescue?
– Premier League fixtures 2019-20 in full
– Who has qualified for Europe from the Premier League?

Any experienced manager or coach with anything like the CV that Chelsea owner Roman Abramovich once demanded of his appointments wouldn’t risk their reputation by taking on a team that had just lost its best player, Eden Hazard, and was unable to add any reinforcements for at least 12 months. It left Chelsea with few credible options, and Lampard, as a Stamford Bridge legend, was never going to reject the opportunity to take charge of the team.

Chelsea have taken a similar approach to Manchester United following the sacking of Mourinho last December in appointing a universally popular former player as manager, but Ole Gunnar Solskjaer’s up-and-down spell in charge at Old Trafford has already highlighted the positives and negatives of the emotional pull when hiring a club legend to run the team. In many ways, Chelsea have taken an even bigger gamble on Lampard than United did by handing Solskjaer a three-year contract.

Solskjaer could at least point to six months in charge of Cardiff City in the Premier League, as well as two spells with Norwegian outfit Molde, as proof of his experience. Lampard has had only one year in management, outside the Premier League, and he did the bare minimum. His return to Chelsea has more to do with his time as a player than his brief résumé as a manager.

At Derby, Lampard won fewer than half of his 57 games in charge, posting 24 victories, 17 draws and 16 defeats. Those are hardly the statistics of a manager likely to force Pep Guardiola and Jurgen Klopp to suffer sleepless nights next season. His Derby side played on the front foot, attacking opponents and scoring 69 league goals in the process, but they also conceded 54 in 46 games. If Chelsea are looking for some kind of continuity, they can probably expect a similar approach from Lampard that Sarri adopted last season in terms of an emphasis being placed on attacking. Without Hazard, however, it will be asking a lot of U.S. international Christian Pulisic to fill the void regardless of how Lampard sends his team out to play.

Despite the hurdles that Lampard must overcome, those who have worked alongside him attest to his drive for perfection and ability make those around him better. Vincent Kompany, who played alongside the former midfielder for a season at Manchester City, spoke earlier this week about how Lampard raised standards following his arrival at the Etihad, bringing with him the winning mentality that had been ground into him by the likes of Mourinho, Ancelotti and even Abramovich at Chelsea.

Having been controversially released by Chelsea at the end of his playing contract in June 2014, Lampard’s determination to prove a point saw him enjoy an impressive swansong at City before moving to New York City FC in MLS, and he will return to Stamford Bridge with that same drive to prove his doubters wrong. There are, undoubtedly, many who will believe that this job has come too soon for him and that he risks souring his association with Chelsea by taking it on now after just a year in management. But Lampard will do it his way, and his decision to bring Derby assistant Jody Morris with him to Chelsea is a pointer to that.

Morris, another former Chelsea player, was a key figure in the club’s successful youth set-up before leaving for Derby 12 months ago, and he will know which of the many emerging stars at Stamford Bridge will be capable of making the step up to the first team. It’s hoped that in doing so, the pair can turn Chelsea’s transfer ban into an opportunity rather than a hindrance.

If Lampard and Morris can tap into the Chelsea production line and transform the team into one that relies on homegrown talent rather than expensive acquisitions, this appointment can prove to be a success story. But Lampard is now embarking on the toughest challenge of his football career, whether he is ready or not.

Billions of dollars bought Qatar a World Cup, but not loyal fans in opener loss to Ecuador
After draw with England, all that matters now is for the USA to beat Iran
EU calls on FIFA to help families of dead workers
Neymar has Pele’s Brazil record in sight; Portugal fend off Ronaldo drama
USA, Wales battle to a draw in their World Cup opener