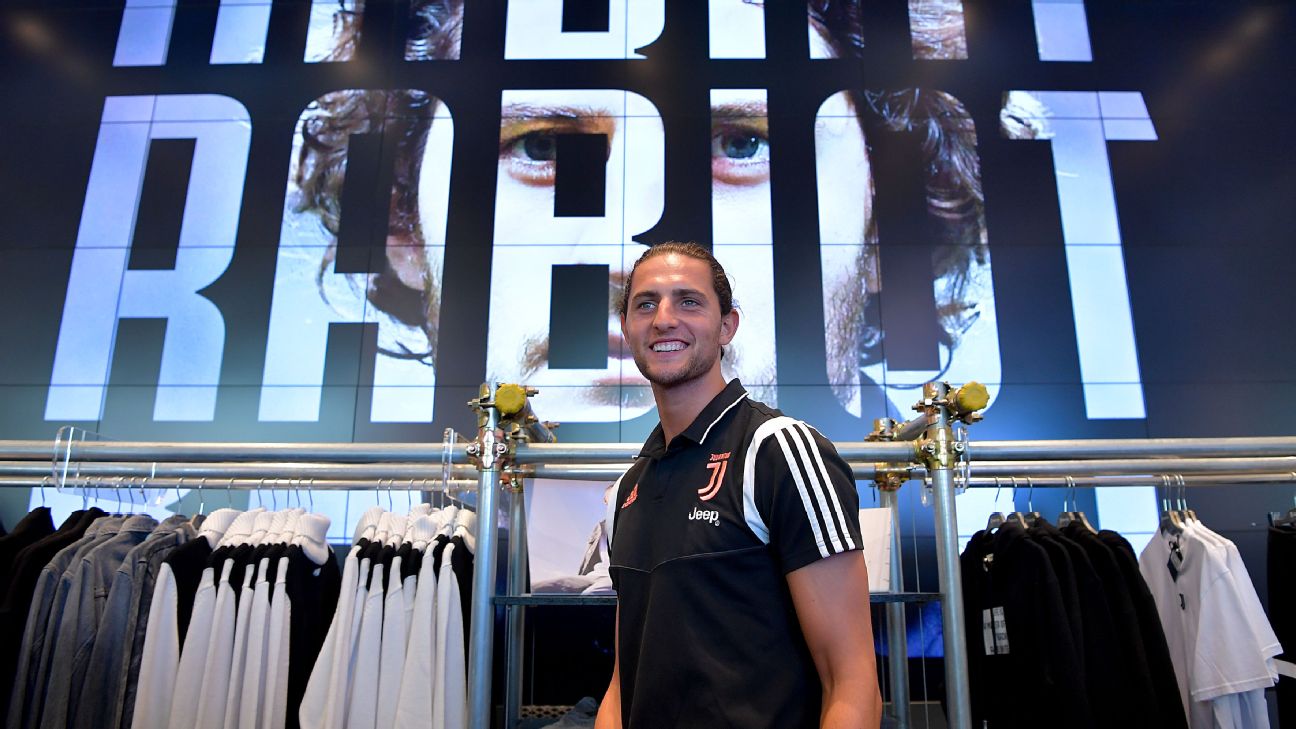 It wouldn’t be a transfer window without fans scratching their heads wondering why their team wasn’t in for the guy Juventus just picked up for free.

The latest arrived Sunday morning, when photos circulated on social media of France and Paris Saint-Germain midfielder Adrien Rabiot exiting a private jet at Caselle. A fleet of Jeeps then taxied him and his entourage to Turin ahead of his fitness tests at J-Medical, the bespoke private health clinic adjoining the Allianz Stadium, the following day.

The 24-year-old’s contract with PSG expired on Sunday, and on Monday, he was free to sign for the Italian champions.

The backdrop of the Alps and the number of French words that pop up in Piedmontese have helped make Turin feel like home away from home to Rabiot and his fellow countrymen for more than a century. Given how strong Juve’s track record has been when it comes to recruiting over the nearby mountain range, it’s often joked that the club’s second language is French. Rabiot follows in the footsteps of Michel Platini, Zinedine Zidane, Lilian Thuram, Didier Deschamps and a host of others — 25 in total — in wearing black and white.

The most appropriate parallel of all, though, at least as it relates to the current front office at Juventus, is with Paul Pogba. Beyond the shared position and nationality, one tradition neatly intersects with another. Rabiot is not only French, he’s the 15th Bosman free transfer completed by Juventus in the past nine years. No one has worked this angle of the transfer market better.

It’s true that Juventus have become richer and more successful in the meantime. They have smashed the Serie A transfer record twice in the past three years, paying €90 million for Gonzalo Higuain and €117m for Cristiano Ronaldo. But the attention given to opportunities in free agency is as strong as ever. After all, the foundation myth of this dynasty starts with Andrea Pirlo’s move from Milan to Juventus for “nothing” in 2011.

Pirlo’s move shifted the balance of power in Italy back to Turin. People are quick to forget that at the time, he was considered over the hill. Marginalised in Milan’s most recent title-winning season, they were willing to offer him only a one-year rolling contract. Juventus, by contrast, felt he still had a lot to give and presented Pirlo, who’d just turned 32, with a three-year deal instead.

Go back and look at the position Juventus were in at the time. They’d just finished seventh for a second consecutive season. They were out of the Champions League again. They hadn’t won the league officially since 2003. After the costly errors of the Cobolli Gigli, Blanc and Secco management team — €27m wasted on Diego Ribas, for example — Juventus had to get smarter in recruitment.

The impact of the Pirlo free cannot be understated. It changed everything, ushering in a fresh cycle of dominance for Juventus. A year later, Pogba arrived and proved as transformative, albeit in other ways. Not only did he help Juventus consolidate and dominate, but he generated a hype and interest that made them feel relevant to a new generation of players. The proceeds from his sale to Manchester United for a world record €105m in 2016 were reinvested in Higuain and Miralem Pjanic, the best players on rival teams as Juventus cannibalised the league, killing it in some people’s eyes.

It would be reductive to argue that these two moves alone explain eight league titles in a row, four Italian cups, two Champions League finals and a series of new records. There’s a lot more to it, from the vision of chairman Andrea Agnelli and the opening of the new stadium, to the mentality and culture imposed by managers Antonio Conte and Massimiliano Allegri, several other aspects of the club’s transfer strategy as defined by Beppe Marotta and Fabio Paratici, to say nothing of Juventus’ daring and ambitious rebrand, which aims to appeal to and win over new supporters. Yet it’s still fair to say both of those deals were major contributing factors in Juventus ascending to, and reclaiming, a position in world football which culminated in Cristiano Ronaldo, of all people, thinking to himself: I’d like to play for them.

It’s also fair to say that Juventus have completed the transition from stepping-stone club to final destination. Sources have told ESPN FC that Pogba wants to come back, while Ronaldo’s presence serves to only enhance Juve’s appeal to emerging superstars like Matthijs de Ligt. More than just a five-time Ballon d’Or winner, he acts as an endorsement, validating the club’s project and signalling its ambition.

– When does the transfer window close?
– Anatomy of a transfer: What’s real and what’s not
– Inside Liverpool’s new transfer policy

Of course, this isn’t an exclusive strategy, and some of Juventus’ competitors are beginning to wake up to this approach. Inter are placing a renewed emphasis on free agency as a reaction to Juventus’ success at it, and Marotta’s appointment as CEO of the football side of the business at Inter has only sharpened the focus further.

At the same time as Rabiot underwent his medical in Turin, Inter announced the signing of Diego Godin on a free. Last year, Kwadwo Asamoah and, most notably of all, Stefan de Vrij joined in the same circumstances. Inter have rebuilt and strengthened their defence with Bosman deals in much the same way Juventus have their midfield with Rabiot, Aaron Ramsey and Emre Can.

It makes you wonder why more clubs aren’t concentrating on this niche of the market. The “free” transfer was once considered a way of filling the gaps, but Juventus have made their team better with frees, acquiring established winners (Pirlo, Dani Alves, Sami Khedira) and potential superstars with high upside and great resale value (Pogba to Kingsley Coman) alike. Consider how much it would have cost to sign Rabiot and Can, both lured away from their respective clubs at age 24, from the likes of PSG and Liverpool had they been locked into long contracts. Can, for instance, was valued at €45.1m by CIES in January.

Doing business this way is a no-brainer if you can do it, and Juventus are masters at it. Talking to people familiar with how they operate, it’s very much a case of obtaining good information, acting decisively and being super-aggressive. Where that manifests itself is in big salary packages and hefty agency commissions. Check the press release for the Can transfer and what stands out is the line: “Juventus will incur additional costs of €16m to be paid over two years.” Can’s representatives did very well for themselves.

As you’d expect, “free” transfers certainly don’t come cheap when fees and salaries are factored in, but they’re still much cheaper than signing a top player with years left on an existing deal. As such, Juventus will (within reason) go the extra mile to reach an agreement for a player they like. They are unfazed when it comes to negotiating with agents who, rightly or wrongly, have a reputation for being difficult and for driving a hard bargain, too. Above all else, a characteristic of all their transfers, something Maurizio Sarri enunciated well in his first news conference as coach of Juventus, is the impression they make when they come to talk to you.

“They made a strong impression,” Sarri said. “It’s not so much about when [they make their move], more about how. They’re a very determined club. When it comes to appointing a coach, I have never seen a club so determined in my 30-year career. This is what convinced me. Seeing a group of directors so unanimous on what coach they were after. Determined and unanimous, that and the name behind them.”

A source familiar with Juventus’ methods confirms as much to ESPN: “That’s Juve.” Other elite clubs like to keep targets guessing, a negotiation tactic of sorts. They give the idea there’s always somebody else, but as an approach, it can leave a coach or player feeling like the interest is lukewarm. When it comes to Juve, “they are the exact opposite.” They come in hot. A transfer target is left in no uncertain terms that Juventus want them. They are made to feel that there is nobody else the club desires. Couple that with the imagination capturing history and tradition of the club and it’s hard to resist.

Ochoa stops Lewy PK in Mexico-Poland stalemate
Spain teen Gavi youngest WC scorer since Pele
How a World Cup kit is designed: What players want and how leaks affect it
Adams: Win vs. England would help sport in US
Wales condemn removal of fans’ rainbow hats