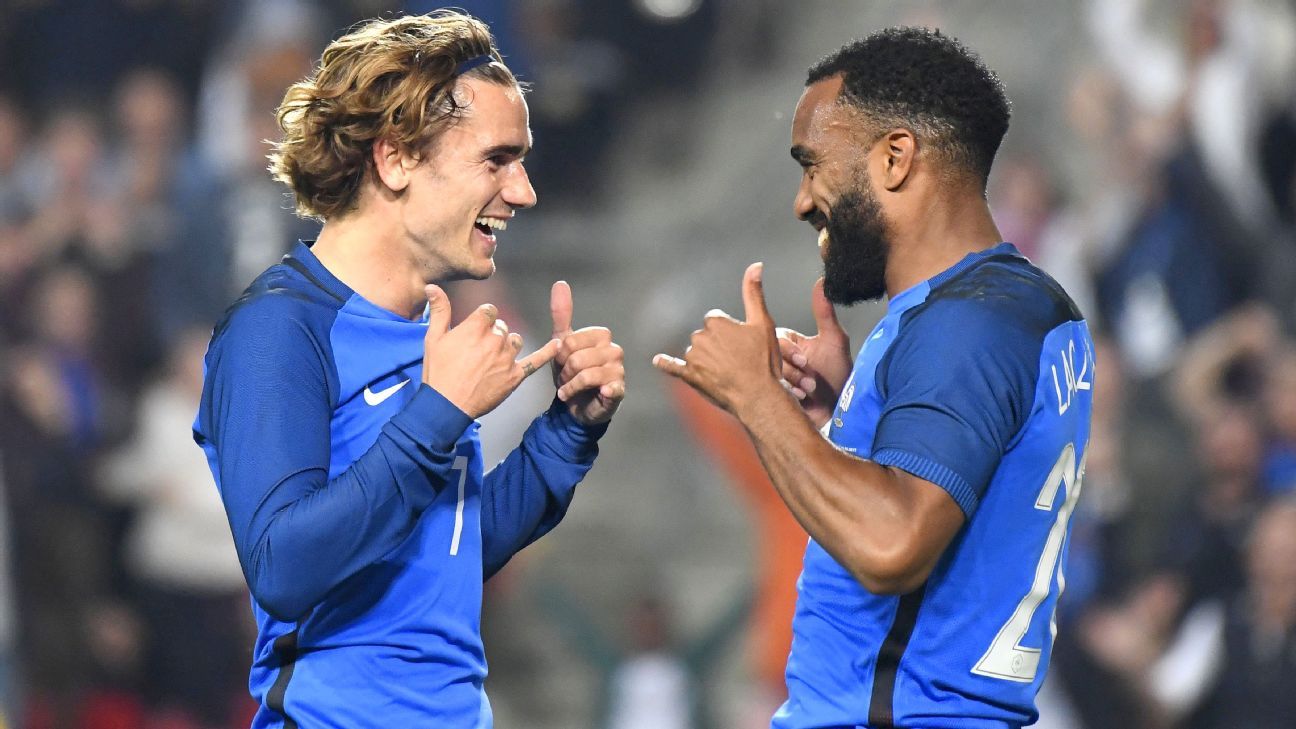 Atletico Madrid are interested in signing Arsenal and France striker Alexandre Lacazette to replace outgoing compatriot Antoine Griezmann, according to the Mirror.

While Arsenal are looking to strengthen their attacking capabilities this summer, they’re also facing substantial pressure to hold on to strike duo Lacazette and Pierre-Emerick Aubameyang, with both players attracting attention.

And with Arsenal missing out on Champions League football next season, a result of winning just one game in their last five matches, both players could be tempted to move on if the right move comes along.

Atletico boss Diego Simeone is looking for someone to replace the goals of Griezmann following the 27-year-old’s move to Barcelona, and Lacazette scored 18 goals in the league and Europa League last season, adding eight assists to his contribution.

08.27 BST: Manchester United have identified Stoke City defender Nathan Collins as the next young prospect they want to sign this summer, according to The Sun.

Collins, 18, has made just three league appearances for Championship club Stoke since his league debut for the club in April, but Old Trafford bosses have reportedly heeded the recommendation of former United midfielder Darren Fletcher for the 6-foot-5 Republic of Ireland youth international.

The Sun also claims that two Bundesliga clubs, including Werder Bremen, are monitoring Collins with a view to making a loan deal happen this summer that could be made permanent at the end of next season.

08.00 BST: Atletico Madrid have had an offer for Spain international centre-back Mario Hermoso turned down by Espanyol, with the Catalan side’s general director Roger Guasch suggesting negotiations for the player are ongoing.

“There was an offer from Atletico Madrid, but we only negotiate from the clause,” Guasch told radio station RAC 1. “Hermoso’s [clause] is €40m. But for example if a player is worth €50m and a club offers you €42m or €45m plus add-ons, we can talk. But not if someone offers you €10m. He has just one year left on his contract, it is normal that he wants to progress his career, but I hope he is back with us on July 8 [for preseason].”

Madrid-born Hermoso, 24, joined Espanyol from Real Madrid’s youth system in summer 2017, and has since established himself as a regular member of the Spain national squad.

Reports have claimed that the Bernabeu outfit retain the right to re-sign their former player this summer for €7.5m.

It looks as though Harry Maguire will be heading to Manchester this summer after the defender told his employers he wants to leave, reports the Sun.

It is not yet clear whether he’ll be donning light blue or red yet though, with City today suggesting they’re prepared to match United’s bid of £70m, which was rejected on Monday. However, both clubs will be buoyed by the fact the England man has now made it clear he wants to quit the club in an effort to play European football.

Arsenal are also interested but are only willing to offer £50m.

Leicester are said to be keen to try and hold out for £85m for a player they felt might give them one last season before moving on. Maguire signed a five-year deal last September but is keen to play in Europe, which suggests City may have the upper hand.

Maguire, 26, has played 20 times for England. Leicester could look to Gary Cahill as a replacement should Maguire leave for Manchester.

West Ham look set for another battle with striker Marko Arnautovic, who has reportedly lodged a transfer request following a bid of £19.7m from China, reports the Mirror.

Chinese Super League club Shanghai SIPG have made the bid for the Austria international and though the Irons fear a stand-off with the player, who seemingly wants to move, they want double the amount bid so far.

Arnautovic is due back for pre-season next week but player and club could be set for a tumultuous summer with the star striker, who they value at around £45m.

West Ham are also aware that Stoke City would receive 20 percent of any fee made after selling the player for £24m in 2017.

It is the second consecutive transfer window in which Arnautovic has asked to leave the London Stadium. West Ham are preparing for life without Arnautovic by chasing Celta Vigo striker Maxi Gomez, but they look set to dig their heels in in an effort to get as much as they can.

– Bayern Munich are closing in on Chelsea’s rising star Jamal Musiala, who is close to agreeing a long-term contract with the Bundesliga champions, according to the Daily Mail. The 16-year-old joined the Blues ranks in 2011 from German side TSV Lehnerz and has played three matches for the club’s U18s since September last year.

– Tottenham have already signed Tanguy Ndombele and Jack Clarke this summer and now they’re looking to secure deals for Giovani Lo Celso and Ryan Sessegnon, according to the Mail Online. Tottenham are also interested in Ryan’s twin brother Steven too, while they’re looking at Norwich City’s Max Aarons as a potential replacement for Kieran Trippier. They’re also looking at Spain U21 international Dani Ceballos as a potential replacement for Christian Eriksen.

– Manchester United look set to make a formal approach for Newcastle United midfielder Sean Longstaff this week, according to the Telegraph. Ole Gunnar Solskjaer is looking to make another signing before his squad jets off to Australia for their pre-season tour on Sunday, and it’s believed they could sign the Newcastle star for £25m. United have also been targeting Bruno Fernandes and Saul Niguez.

Pele to Brazil squad: I will cheer from hospital
Off the bench, Ronaldo can help Portugal in a way he refused to at Manchester United
WSL crowds up 200% on last year – director
Ronaldo’s latest row with his coach is nothing new; he has a long history of them
Neymar set to return for Brazil against S. Korea