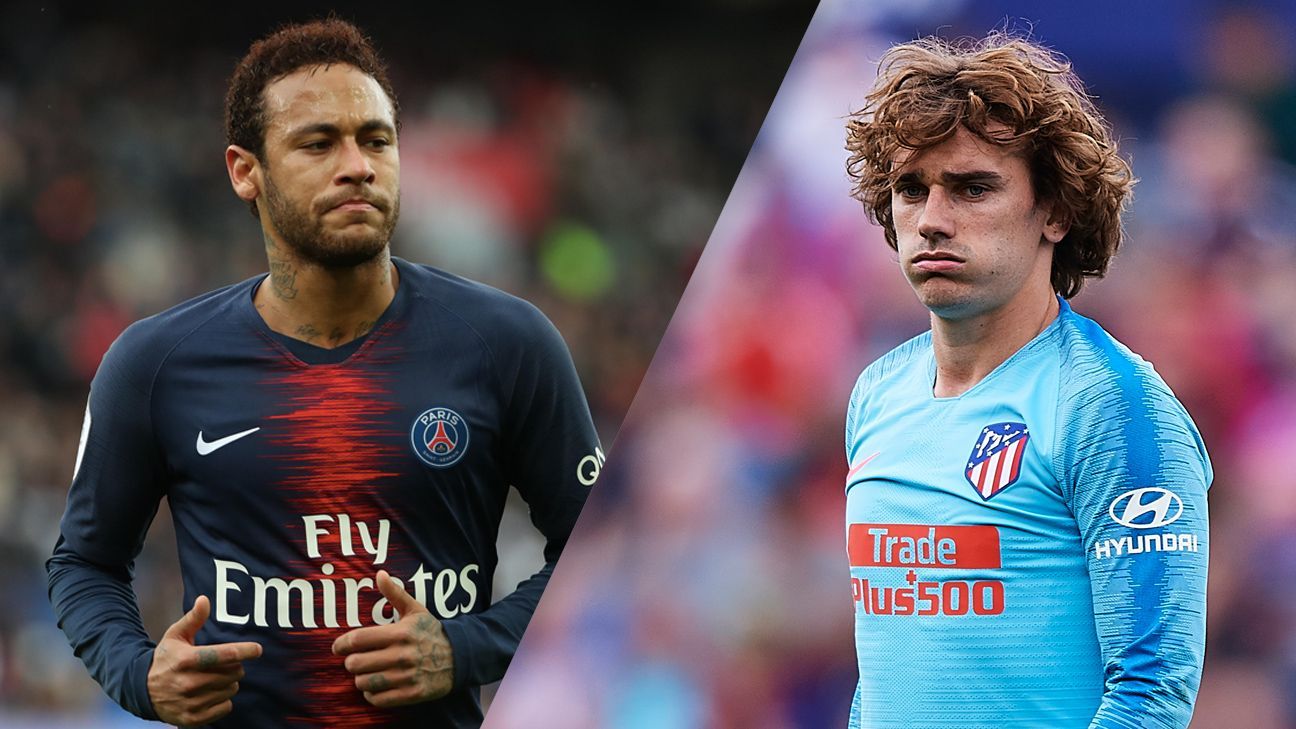 Imagine the stadium announcer on La Liga’s first weekend. Imagine the impact on the crowd and opposition when he’s finished reading out the first seven names on Barcelona’s team sheet: “Marc-Andre ter Stegen, Dani Alves (which may get a roar in itself), Gerard Pique, Samuel Umtiti, Jordi Alba: Sergio Busquets, Frenkie de Jong …”

In this scenario, lining up in a 4-2-3-1 formation, Barcelona have achieved the seemingly impossible by sending Philippe Coutinho, plus €100m, to PSG for Neymar and sticking to their pre-planned €120 million buyout-clause “smash-and-grab” to take Griezmann from Atletico Madrid.

To many this transfer market feat would be akin to the row of buses Evel Knievel refused to jump on his trusty 1972 Harley-Davidson XR-750, the icy Himalayan peak Sir Ranulph Twisleton-Wykeham-Fiennes wouldn’t climb, or the straightjacket from which Harry Houdini couldn’t contort himself to freedom. One challenge too far.

But Barcelona made a club-to-player deal with Griezmann back in March that they’d spend the money when his buyout clause lowers from July 1. And the club are most certainly weighing up the opportunity to bring Neymar back, less than two years after his world-record €222m move to PSG.

It’s not so fanciful that this could be the XI in mid-August — complete with 36-year-old right-back Dani Alves’ return after his contract ran out at PSG — but there are another couple of logical, if less daring, solutions.

1) Stick to the strategy of buying Griezmann and ignore Neymar’s mewling and scratching at the back door, keeping Coutinho instead.

2) Manoeuvre Griezmann to PSG, then repatriate Neymar for significantly less (outlay and wages) than it cost PSG to acquire him in 2017 — using some of the €120m they would have spent on the Frenchman on the Brazilian instead, plus Coutinho.

OK, now we’ve got those two “frugal” alternatives out of the way, we can dismiss them. Because neither option is what sources have told ESPN that the bean-counters, strategists and mad-eyed-dreamers at Camp Nou are interested in pushing through.

By forcing a powerful Coutinho valuation on PSG, dropping the near €90m purchase of Ajax defender Matthijs de Ligt (re-deploying the cash they’d earmarked), totting up another €100m in squad-player sales and imposing the appropriate wage-agreement on Neymar, Barcelona are trying to have their cake and eat it.

If, and that’s a big if, the Camp Nou club could pull off this truly remarkable, and hellishly risky, deal would Messi, Neymar, Suarez and Griezmann constitute the greatest attacking quartet any club in history has possessed at one time?

I can assure you that marketable slogan itself would be sufficiently attractive to some club presidents or board members to press the button on the deals and damn the consequences. Ego and popularity contests play a far bigger role in football club decision-making, masquerading as strategy, than most would like to admit.

But if it comes to pass it would strike an interesting historic chord.

We’re still celebrating the 20th anniversary of Manchester United winning what was, then, only the fourth Treble of domestic league, main domestic cup and European Cup/Champions League (they followed Celtic, Ajax and PSV) in history.

One of the fundamentals of Sir Alex Ferguson’s achievement in 1998-99 was how rare it was to successfully group four such exceptional, proud, demanding, internationally recognised strikers as Andy Cole, Dwight Yorke, Ole Gunnar Solskjaer and Teddy Sheringham in one squad.

Across United’s four competitions the four men combined to score 76 times. One or other of them hit the net on the final, decisive, day of the Premier League, the FA Cup final and, of course, the added-time Champions League triumph over Bayern Munich at Camp Nou. That Treble bore the strikers’ signatures more than any other department, though of course Fergie didn’t start all four of his musketeers in the same XI.

Contrastingly, you’d better believe that if Messi, Suarez, Griezmann and Neymar were all with Barca then manager Ernesto Valverde would be required to make all four start as the rule, rather than the exception. Not every single week, obviously, but wherever possible.

Notably, the only two clubs other than Barcelona to have won the Treble since United in 1999 have boasted similar firepower: Inter Milan, lifting Serie A, Coppa Italia and Champions League under Jose Mourinho in 2010, used Diego Milito, Samuel Eto’o, Mario Balotelli and Goran Pandev. Bayern Munich, steered to Bundesliga, Pokal and Europe’s top prize by Jupp Heynckes in 2013, could choose from Mario Mandzukic, Thomas Muller, Mario Gomez but also from Arjen Robben, Franck Ribery and Claudio Pizarro.

Barcelona’s 2009 Treble under Pep Guardiola was powered by a massive goal total from: Messi, Thierry Henry, Eto’o, Eidur Gudjohnsen and Bojan Krkic. While Luis Enrique’s trophy triplet of 2015 had the MSN of Messi, Neymar and Suarez, plus Pedro.

The financial gymnastics in which Barcelona are indulging to sign both Neymar and Griezmann are, to any Barca purist from the Johan Cruyff/Guardiola/Txiki Begiristain school of thought, an aberration. It’s the mentality of Real Madrid-esque Galactico purchasing — nearly €300m lavished on Coutinho and Ousmane Dembele, but hey “cash them in and re-splurge!” if the team seems jaded, or wilts in the red-hot heat of Anfield. Just like in Paris, Turin or Rome in recent years.

Adding Griezmann and Neymar is another nod of disrespect, indeed disdain, not only towards the youth academy (La Masia) work and ideals, but more specifically to Carles Alena and Ricki Puig whose form and maturity are beginning to demand significantly more game time in the first XI.

Let’s not ignore the dilemma of club president Josep Maria Bartomeu, either, after he explicitly stated that one of his legacies, before his mandate ends in 2021, should be renewing Messi’s contract once again. If, as I believe, Messi has made it clear to Bartomeu that he must try to bring Neymar “home,” then how does the president slap that request down, or ignore it, but then start what he hopes will be fruitful, effective negotiations with team Messi?

In summary, Barcelona want this remarkable double deal to take place. They can probably pull it off. In fact that’s the slight favourite in the betting.

It’ll hamstring them financially, and it’s a direct kick in the teeth to what was once Barcelona’s football philosophy, but it’ll fixate world attention on Camp Nou once more, it’ll charm both current and potential sponsors and, should the players click on the pitch, it’s feasible that the Treble could finally be re-achieved.

Tell me seriously, what would you try to do in the club’s position?