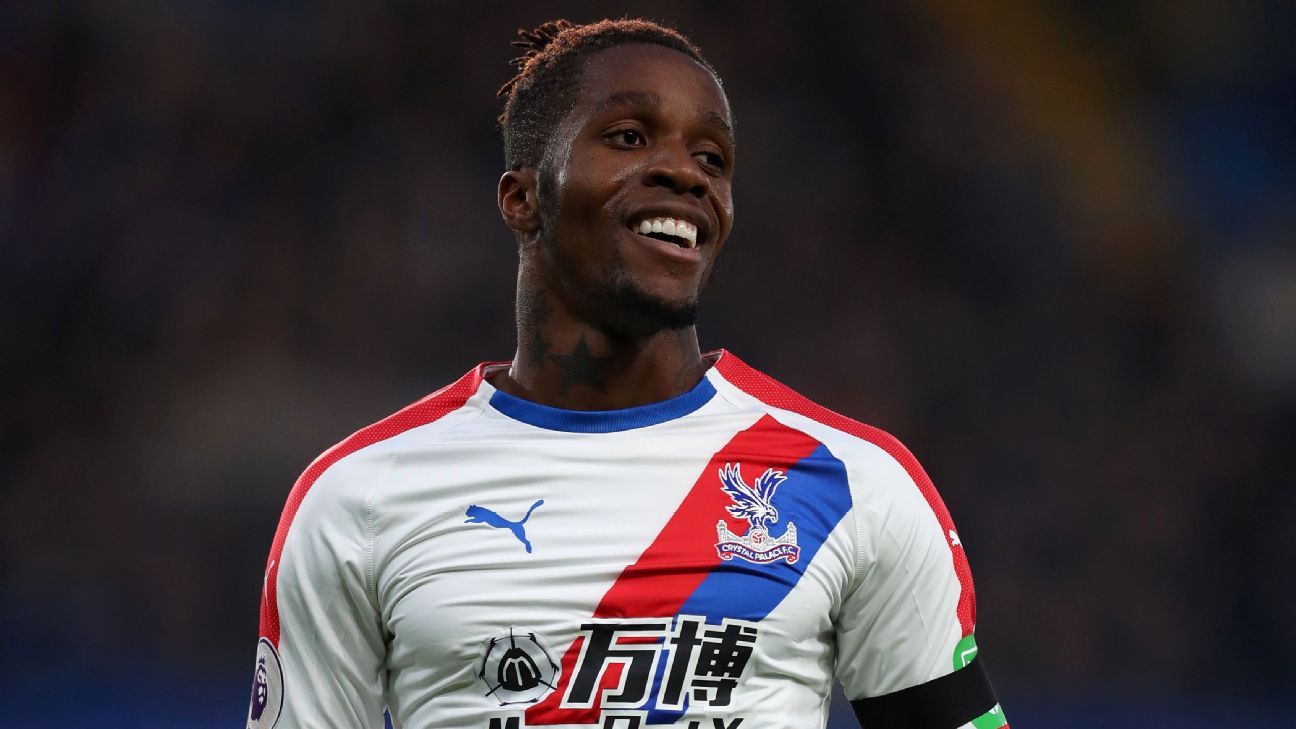 It’s no secret that Arsenal want a winger this summer, and Crystal Palace’s Wilfried Zaha is keen for that winger to be him, according to the Mirror.

Zaha, 26, joined Manchester United in 2013 but that didn’t work out and he returned to Palace two years later. Now, having proved himself to be a top Premier League player, the Ivory Coast winger wants another move — to boyhood club Arsenal.

The Gunners only have a budget of around £45m but are reportedly ready to sell one of their best players, such as Golden Boot winner Pierre-Emerick Aubameyang, in order to fund a move for Zaha.

With right-back Aaron Wan-Bissaka having joined United (see below), Palace could find themselves with a load of cash to spend soon.

22.42 BST: That’s it for tonight’s edition of our Transfer Talk LIVE blog. We hoped you enjoyed following along with us and remind you to check back shortly for Sunday’s fresh transfer rumours, reports and completed deals. Take care.

20.30 BST: Marca reports that Real Madrid, in the midst of sizable squad overhaul, have rejected an offer for Tottenham midfielder Christian Eriksen.

The outlet says that Spurs chairman Daniel Levy has called Real director general Jose Angel Sanchez about the 27-year old who has so far refused to sign an extension with the London club. And though the Champions League runners-up have reduced the Dane’s price from €150 million to €70m this summer, the La Liga giants — with Paul Pogba still their top priority in midfield — are not yet ready to move on Eriksen.

19.37 BST: There’s no let-up in the pace as Manchester United continue their summer rebuilding programme, with the Mail saying they will make an opening offer for Newcastle midfielder Sean Longstaff in the next few days.

18.37 BST: Leeds, beaten in the Championship playoff semifinals last season, are about to sign Wolves winger Helder Costa on a season-long loan deal, according to the Telegraph, which says the move “will be viewed as a huge statement of intent” from manager Marcelo Bielsa.

17.40 BST: Watford are close to finalising a deal to bring in defender Craig Dawson from Championship side West Bromwich Albion, according to reports.

17.00 BST: Manchester United believe that forward Marcus Rashford will put pen to paper on a new contract in the near future, according to the Mail, which says the England international “is in line for a bumper pay rise to around £200,000 a week.”

16.25 BST: The Mail reports that Wolves are interested in Gremio defender Walter Kannemann, previously linked with Arsenal. Kannemann would be likely to cost around £10 million and is reported to want to play in a European league.

15.57 BST: A Rocky moment in Norwich’s recruitment programme, it seems:

Belgian U21 international Rocky Bushiri (defender) is on his way to Norwich City. Transfer will be completed over the next few days. (via @foottomaz) #ncfc #norwichcity pic.twitter.com/n8c9FdgRm9

15.25 BST: A Championship tussle now, with the Mail reporting that Millwall and Bristol City will battle it out for the signature of Barnsley forward Kieffer Moore, whose 19 goals last season helped his side win promotion from League One.

14.51 BST: The Mirror reports that Arsenal are one of four Premier League clubs “considering a summer swoop for former Chelsea captain Gary Cahill.” The 33-year-old defender, a free agent at the end of this month, has also been linked with West Ham, Aston Villa and Crystal Palace.

14.11 BST: Spurs fans haven’t seen a signing for 18 months, but the London Evening Standard reports that they are expected to wrap up a deal worth around £60 million for Lyon midfielder Tanguy Ndombele and are on the brink of signing teenage Leeds winger Jack Clarke.

13.06 BST: Leicester have not given up hope of securing a permanent deal for midfielder Youri Tielemans, who starred for them on loan from Monaco last season. Reports in Belgium suggest the Foxes are ready to put forward a deal worth around £40 million that would see Adrien Silva move in the other direction.

12.20 BST: Having previously been linked with Manchester United and Chelsea, Birmingham striker Che Adams is on the verge of a move to Southampton, says the says the Mail.

The 22-year-old “said farewell to his Birmingham City teammates on Saturday after Southampton made an improved £16m bid.” Saints will cover the cost with the sale of Matt Targett to Aston Villa for around the same fee (see below).

The England under-21 international becomes United’s second signing of the summer following the arrival of Dan James from Swansea.

“It’s an unbelievable feeling and an honour to call myself a Manchester United player, and something I know that only a small number of players have the privilege to say,” Wan-Bissaka said.

11.48 BST: Barcelona’s Ivan Rakitic has been the subject of a €35m bid from Manchester United, SPORT says.

United need a new midfielder or two, especially if Paul Pogba leaves, and the 31-year-old Croatia international fits the bill. However, the report says Barcelona will only consider offers above €50m.

11.08 BST: Sky Sport Italia reports that Juventus have finalised a move to sign Adrian Rabiot on a free transfer once his contract with PSG ends on June 30.

Rabiot, 24, has been playing for PSG reserves for six months after refusing to sign a new deal, and the midfielder is set to become the latest big name to join Juve for nothing.

10.27 BST: Southampton left-back Matt Targett is set to sign for Aston Villa, who have have agreed a £14m fee rising to £17m with add-ons, says the Telegraph.

Villa have already brought in Wolves defender Kortney Hause for £3m and spent £22m on Wesley Moraes from Club Brugge.

09.59 BST: Preston striker Callum Robinson is the subject of a £6m bid from Norwich, according to Sky Sports.

The 24-year-old has scored 12 goals in 27 appearances in the Championship and would join Josip Drmic in becoming one of the Canaries’ new attacking signings this summer.

UPDATE: Preston released a statement saying: “Contrary to reports in the media, Preston North End can confirm that they have no bids on the table for any of their players.”

09.25 BST: Highly-rated Republic of Ireland U19 international Luca Connell has signed for Celtic from Bolton on a four-year deal.

09.00 BST: Wellington Phoenix attacker Sarpreet Singh, 20, is set to move to Bayern Munich in a deal worth around AU$1m.

“The contract is quite clear and we can’t reveal details but there is a fee in there as well as a few add-ons,” Phoenix CEO David Dome told the NZ Herald. “We are happy with the overall structure and the deal in its entirety, no doubt about it.

“We fully expected the Under-20 World Cup would be a shop window for a number of our players and we had planned that Sarpreet could have been one of those to receive an offer. We always thought it could play out like this, though we were a little bit surprised obviously that it is Bayern that have come in for him.”

PAPER TALK (by Richard Edwards): Inter ready to sell to bring in Lukaku

Inter Milan are ready to sell two stars in order to bring in Romelu Lukaku, according to the Sun.

It reports that Antonio Conte has stepped up his interest in the Manchester United striker and is willing to flog Joao Mario and Dalbert for a combined £40m in order to meet the asking price of £75m.

Mario appears to be en route to Monaco, who are ready to splash out £22m for his services.

Dalbert, meanwhile, is attracting the attention of both Monaco and Lyon, who are prepared to shell out £18m for the Brazilian.

You can’t fault Bayern Munich for a lack of effort when it comes to Callum Hudson-Odoi.

The Bundesliga side are head-over-heels in love with the Chelsea youngster, despite him being out with a long-term injury, and the Guardian reports that they have submitted another bid.

However, it says they have again been rebuffed by Chelsea, who can ill afford to say farewell to one of their brightest young stars as a transfer ban looms.

Bayern first entered the race for his signature in January, putting in an initial offer of £35m, and with Hudson-Odoi’s deal at Stamford Bridge set to expire in under 12 months, Chelsea know they have to work quickly to persuade him that his future lies in London.

Chelsea are playing hardball with Atletico Madrid over Alvaro Morata‘s loan, the Telegraph says, reporting that the Blues are demanding that Atleti make Morata’s loan permanent or they will take him back to London.

Morata joined Atletico on an 18-month loan in January, but Chelsea have the option of bringing him back if the Spaniards don’t make his move permanent.

Now, with a two-year transfer ban looming, they’re prepared to exercise that right – and given that Atleti are about to spend £112.9m on Joao Felix that might be enough to persuade them to hand Morata a ticket back to London.

- Theo Hernandez is set to sign a six-year deal with AC Milan after bidding farewell to Real Madrid.

That’s according to Marca, which reports that the left-back — who spent last season on loan at Real Sociedad — will undergo a medical at the San Siro on Monday.

– Mauricio Pochettino has admitted that Daniel Levy holds the key to Spurs’ transfer activity. The Mail reports comments from the Spurs boss that it’s Levy who will have the final say on how much the club does or doesn’t spend.