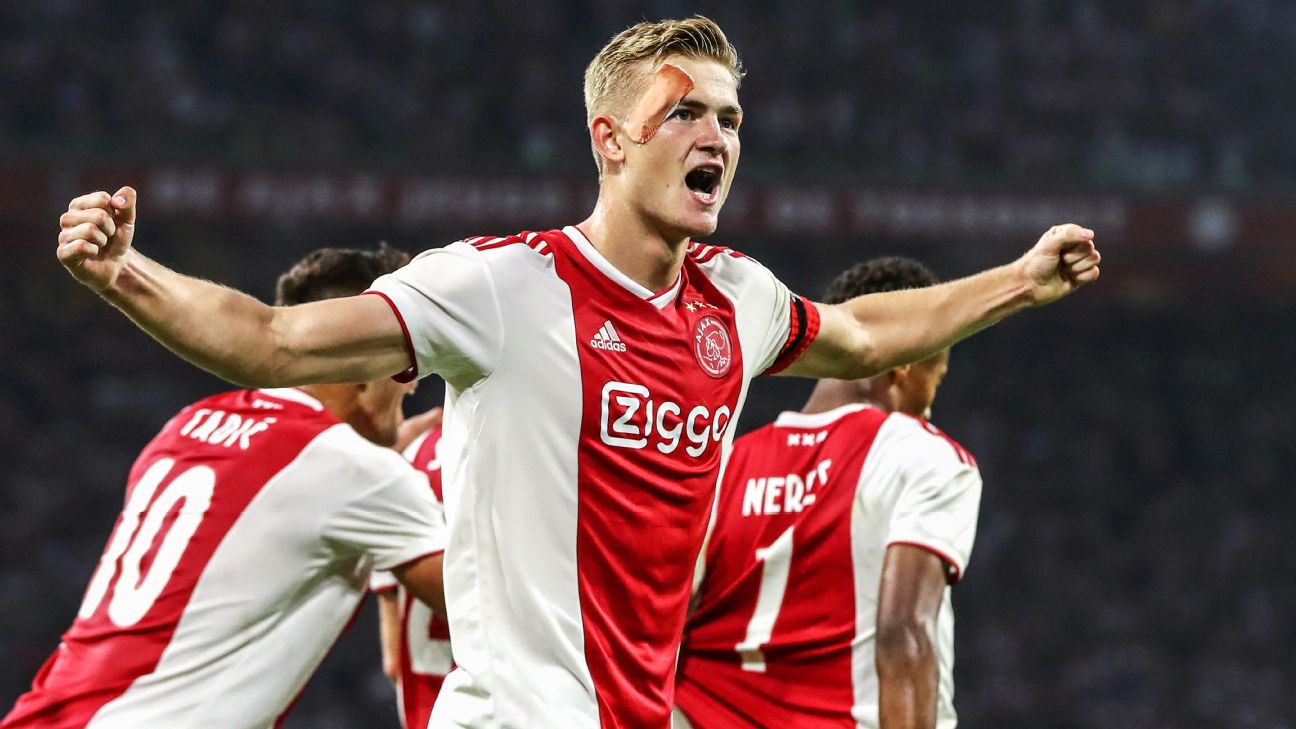 The summer transfer window is in full swing, but there’s plenty of work to be done given the flurry of international tournaments that have occupied the attentions of some of this summer’s biggest targets. Which players are likeliest to move before the 2019-20 campaign? David Amoyal rates the top rumours from around world football in the latest edition of our summer Rumour Rater.

Considering that the Serie A champions are confident they can sign Adrien Rabiot on a free transfer to further bolster their midfield, it’s not entirely surprising to see them shift their attention from Paul Pogba to the Dutch centre-back. Juventus have a strong relationship with agent Mino Raiola and their pursuit of De Ligt dates back to 2018, when he visited their training facilities in Turin. It also didn’t hurt that Cristiano Ronaldo asked him to join him after the Nations League match between Portugal and the Netherlands. While Juventus still face competition from Paris Saint-Germain, De Ligt is convinced playing alongside Giorgio Chiellini is the ideal next step in his development.

The Partenopei are increasingly confident they can acquire the Colombia international on a loan-with-an-option-to-buy deal. James is intrigued by opportunity to rejoin his former coach Carlo Ancelotti, and Napoli are willing to make him their highest-paid player ever and waive their usual requirement of owning the image rights for their stars. Agent Jorge Mendes is working on completing a deal that would see Napoli pay Real Madrid a substantial fee for the loan, with an option to buy set at €30 million, which would become an obligation to buy should the Italian club win Serie A.

The 21-year-old Spaniard’s excellent performances in the Croatian league and with Spain at the Under-21 European Championship have tuned the heads of many clubs, including Barcelona. The Blaugrana are in fact very keen on bringing Olmo back home, after he left the Catalan side for Dinamo Zagreb when he was 16, and are pondering an offer in the region of €30m to beat Bayer Leverkusen — who have made him their top target to replace Borussia Dortmund-bound Julian Brandt — in the race to secure the signature of the talented winger.

With backup left-back Alberto Moreno set to leave Anfield at the end of the month, Liverpool are on the lookout for a replacement that could provide adequate cover for Andrew Robertson. One of the players under the Reds’ magnifying glass is Spain U21 international Junior Firpo. The Panama-born full-back playing at Real Betis could be acquired for €50m — a sum that would trigger the release clause in his contract. Liverpool, however, are still considering whether it would be wise to spend such a significant amount of money on a potential backup, and will hence take their time to contemplate every option.

The former Roma captain had a change of heart and has decided to continue playing in Serie A rather than heading to MLS or join Boca Juniors. Milan are banking on his good relationship with Frederic Massara — who after being Monchi’s top assistant at Roma, became the Rossoneri‘s sporting director — as well as new coach Marco Giampaolo. But Milan will face strong competition from Bologna, Fiorentina, Inter and especially Sampdoria, who just hired former Roma manager Eusebio Di Francesco and are looking to give Francesco Totti a significant role in their front office. A move there may be easier to stomach than Milan for Roma fans, a factor that may also weigh on De Rossi’s mind.

– When does the transfer window close?
– Anatomy of a transfer: What’s real and what’s not
– Inside Liverpool’s new transfer policy

The 27-year-old centre-back had a breakout season playing for Walter Mazzarri, which earned him a selection to the Italian national team as well as the interest of multiple Premier League clubs. Torino are however determined to hold on to Izzo and president Urbano Cairo is willing to reward him with a raise, but with both Everton and Arsenal ready to offer close to three times what the Italian club paid to acquire him last year from Genoa, a move to England could be in the cards for the defender this summer.

The legendary Italian goalkeeper is looking for a new experience after spending a season at Paris Saint-Germain. While Buffon has received proposals from Fluminense and Leeds, and Atalanta offered him the chance to return to Serie A and play in the Champions League, his most likely destination is Porto, where he could replace close friend Iker Casillas.

The Croatia international turned down a rich offer from the Chinese Super League, as his preference is an experience in the Premier League. Manchester United have been linked to him in the past and could work with Inter on a larger deal also involving Romelu Lukaku, who has already agreed to personal terms with the Italian club. Perisic has also been linked to Arsenal, who came close to signing him last January, as well as Leicester.

After little more than a year in China, Yannick Carrasco seems determined to return to Europe. The former Atletico Madrid player is showing clear signs of discontent and is trying to force a move out of Dalian Yifang. Among the teams scouring the market for a winger, Bayern Munich would be open to fulfill the Belgian’s wish and take him back to the Old Continent, but at the moment they are considering this possibility only as a plan B. The reigning Bundesliga champions are focused on the negotiations for Leroy Sane and could decide to step up their interest in Carrasco only if their pursuit for the Manchester City winger turned out to be a wild goose chase.

As odd as it may sound, Celtic’s sale of Virgil van Dijk to Southampton in 2015 for the relatively cheap price of £13m could be a major problem for Arsenal in their chase for Scottish left-back Kieran Tierney. The deal for the Dutch defender caused a complete shift in Celtic’s transfer policy, as the Glasgow-based club are unwilling to again take the risk of selling one of their best players for less than asking price only to regret it later. For this reason, Arsenal’s initial offer for Tierney of £15m was turned down, as the Bhoys remain adamant they won’t accept less than double that sum. For their part, the Gunners are not giving up just yet and they are preparing an improved offer in order to soften their counterparts’ position.

Pulisic fires US into WC last 16 with win vs. Iran
Political statements affect performance – Wenger
Adams: US match with Dutch ‘huge opportunity’
Too little, too late: Mexico’s streak of reaching knockout rounds snapped despite win
Round of 16 is set! South Korea show Uruguay out, USA-Netherlands preview