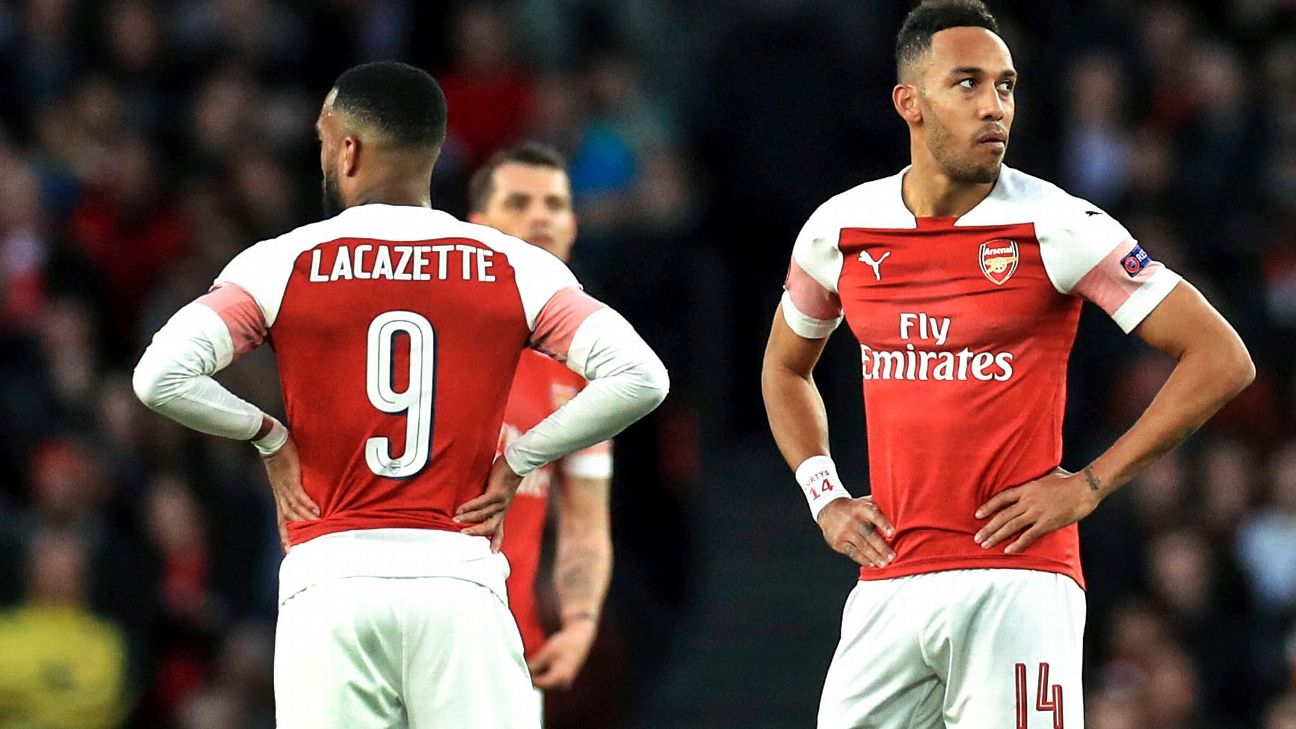 Golden Boot winner Pierre-Emerick Aubameyang was one of Arsenal’s best players last season, so it’s only natural that he’s being linked with a move away this summer.

The 30-year-old striker has attracted the attention of Manchester United, who are looking for a replacement for Romelu Lukaku, but Tuttosport claim that Aubameyang is actually interested in becoming the next Robin van Persie (swapping Emirates for Old Trafford) in a deal worth £70m.

Arsenal spent £54m to sign him from Borussia Dortmund just 18 months ago, so they would net a profit, while they reportedly need the cash to boost their paltry £45m budget for the summer window.

That could go a long way into reinvesting in their squad, but the message of selling a top star to a direct rival is something Arsenal fans hoped they had seen the back of.

Meanwhile, offloading Mesut Ozil and his £350,000-a-week wages would also help, but the Daily Mail claim that nobody wants him.

09.34 BST: Napoli president Aurelio de Laurentiis loves to chat about transfers and he had some good news for PSG when he told Sport Mediaset: “If a good offer arrives, which would allow us to find a replacement, Allan‘s departure can be considered. On the other hand, if it happens towards the end of the transfer window, it will not be possible.”

Less good news for anyone keen on signing Kalidou Koulibaly, though, as he added: “The big teams have big defences and that is what we aspire to. We want to pair Koulibaly with perhaps Kostas Manolas.”

09.16 BST: Sporting Lisbon forward Joao Felix could be set for a massive move this summer, here’s what our guys think about it.

08.52 BST: James Rodriguez‘s father, Wilson, believes Napoli would be the best club for his son to join this summer.

The Colombia winger returned to Real Madrid this summer after two seasons on loan at Napoli. However, his stay at Madrid will be short-lived with the Spanish club expected to loan or sell the player.

Napoli are hoping to acquire James, who is competing at the Copa America, but the player said earlier this week he didn’t know where he will play next and that Madrid still had to make that decision.

“I think a new chance is what his career needs right now, ” Wilson James Rodriguez told Calcio Napoli24: “(Colombia’s David) Ospina is at Napoli, I think that’s very important. Napoli is the best option for him.”

James would reunite with former Real Madrid coach Carlo Ancelotti at Napoli and his father said this would be a good thing: “Between them there is a lot of respect. He (Ancelotti) has always been very happy with his performance.”

08.34 BST: Cadena Cope report that Neymar‘s mother and sister are in Barcelona searching for a house for next season amid speculation that the Brazilian will return to his former club.

Neymar reportedly wants to part with Paris Saint-Germain two years after leaving Barcelona for the French capital for a world-record €222m. According to the Spanish radio station, Neymar’s desire would be to return to the same house in the city he lived in for four years before his departure to PSG.

08.00 BST: Liverpool have sealed a £5m deal rising to £7m for the sale of Rafael Camacho to Sporting Lisbon.

The 19-year-old turned down the opportunity to sign a new contract with the European champions after agreeing to one in January on the provison of being loaned out, which never transpired. He nows returns to the Portuguese club where he kickstarted his career having rebuffed approaches from Wolves, Schalke and AC Milan due to concerns over game time.

Sporting were unsuccessful with their loan offer during the winter window, but Liverpool now left with only two options: negotiate a permanent transfer with the club or lose Camacho for a £270,000 compensation fee in 12 months’ time when his current terms expire.

The add-ons in the transaction will be activated on account of the Primeira Liga’s side domestic and continental successes.

Liverpool have also inserted a 20 percent sell-on clause and a buy-back option into the agreement. The former stipulation is of particular interest given Sporting’s track record in holding out for maximum fees.

Manchester City and Manchester United are set to go head to head once again, this time in a fight to secure the signature of Hoffenheim midfielder Ilay Elmkies, the Sun reports.

The 19-year-old has been dubbed “the next Thiago Alcantara,” who has previous experience working under Pep Guardiola at Bayern Munich.

With one year left on his contract and an estimated value of just £2.5m, it’s not hard to see why clubs further down the football pyramid might be keeping an eye on Elmkies too, with West Ham also said to be showing interest.

Tottenham Hotspur have been asked to submit an improved bid for Tanguy Ndombele after Lyon rejected the initial offer, RMC Sport reports.

Spurs opened with a bid of €45 million for the highly rated 22-year-old, a fee deemed far too low by the Ligue 1 side, who have asked for a figure closer to €70m.

Ndombele has been linked with the North London club for some time, but murmurs that Manchester United and Paris Saint-Germain were also interested forced Mauricio Pochettino to personally convince the midfielder to join Tottenham.

Lyon president Jean-Michel Aulas said: “Tottenham made us an opening offer worth €45m. Then, we discussed more. Nothing is done, I can assure you. We are not in a hurry either. How much is he worth? I do not know, but not just €45m.”

Dani Ceballos hasn’t even left Real Madrid yet, but he’s already pining for his future at the Bernabeu.

Marca reports that Zinedine Zidane has no interest in keeping the 22-year-old midfielder this season, and the Madrid board are catering to their manager’s wishes this summer. Ceballos accepts that he will need to leave the Spanish capital in the short term but is hopeful any move away is on loan or contains a buy-back clause.

The report suggests that Inter, AC Milan, Napoli, Arsenal and Sevilla are all interested, and that Real Betis are among that group, hopeful of a homecoming for the player who spent six years at the Estadio Benito Villamarin. Madrid reportedly would be willing to part with the Spain international for a sum of €50m.

Adrien Rabiot has not rejected an offer to stay at Paris Saint-Germain but will be leaving the club anyway, his agent has reiterated, according to RTL.

Juventus had reportedly agreed a deal to sign the midfielder, before PSG initiated a last-ditch effort to keep him in the French capital.

Commenting on the confusion, Rabiot’s agent and mother Veronique Rabiot said: “I read absolutely everything: that Adrien had an appointment with [PSG sporting director] Leonardo that he did not honour, or that I received an offer to extend his contract from Leonardo that I refused to raise the auction. This is absolutely wrong. There is not the slightest discussion between Leonardo and I.”

– Unable to make any signings of their own this summer, it’s no surprise that Chelsea have rejected a bid for Callum Hudson-Odoi from Bayern Munich, as reported by the Mirror. Instead, the Blues are hopeful of securing him to a new five-year contract.

– Arsenal midfielder Krystian Bielik has made no secret of his desire to leave Unai Emery’s side, with the Sun reporting that the prospect of first-team football elsewhere has convinced the 21-year-old of his decision. The report states that clubs from England, Germany, Italy, the Netherlands and Belgium have all registered interest, and the Gunners already have received offers for the Poland U21 international.