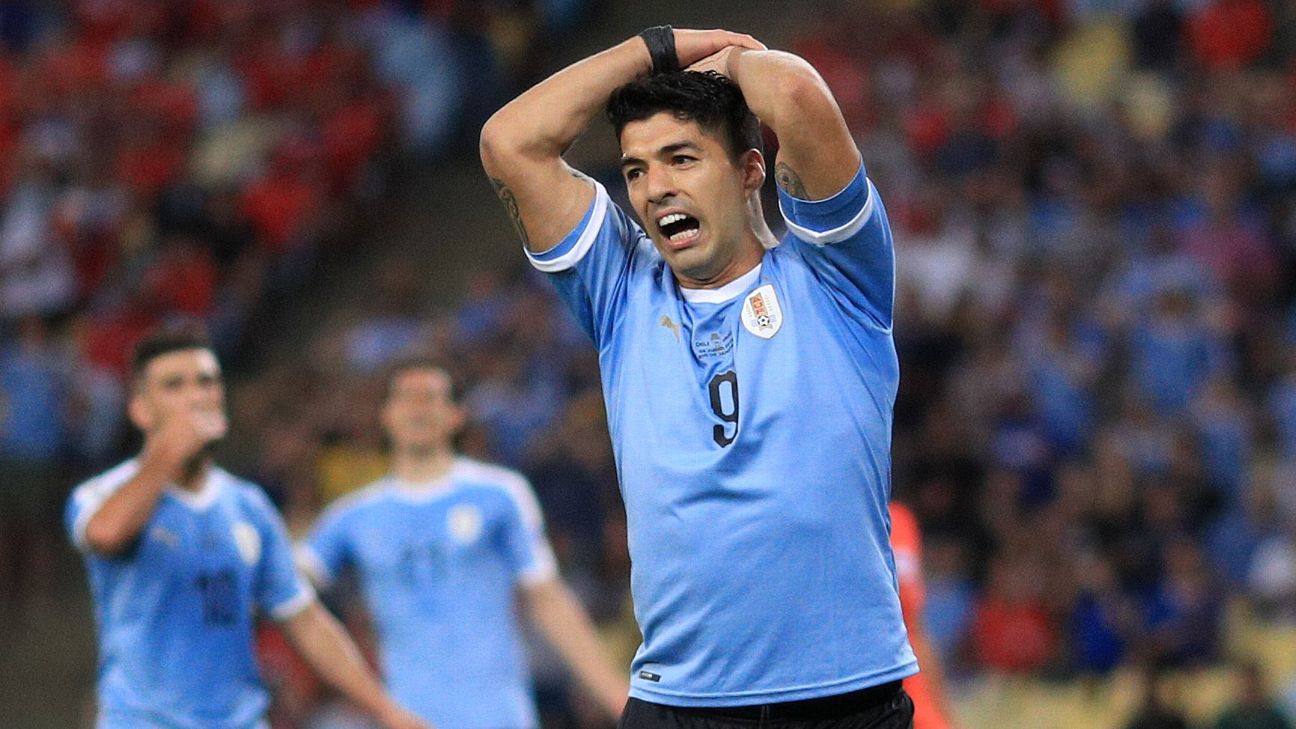 It’s fair to say that Luis Suarez had an eventful night as Uruguay faced Chile in the Copa America on Monday (watch the tournament live on ESPN+).

The Group C match at Rio de Janeiro’s world-famous Maracana stadium was played on the five-year anniversary of Suarez’s equally iconic nibble on Italy defender Giorgio Chiellini‘s shoulder at the 2014 World Cup, so it’s perhaps fitting that he was up to all his old tricks.

He received a four-month ban from football. pic.twitter.com/eB3xAG3xYX

In fact, the Barcelona striker was caught doing the most “Luis Suarez” thing imaginable at one point while appealing for a handball — against the Chile goalkeeper, for handling the ball inside his own box!

Suarez attempted to round Gabriel Arias, only for the stopper to manually block his path, for which Suarez instinctively attempted to claim a penalty.

Unperturbed, the Celeste star launched another frenetic card appeal to the referee when Chile full-back Gonzalo Jara brought down a pitch invader with a robust trip.

Quite the night’s work for our old friend Luis.

Uruguay went on to pip Chile 1-0 thanks to a late goal from Edinson Cavani that ensured they finished top of their group, thus setting up a quarterfinal tie against Peru. Chile, meanwhile, will take on Colombia for a place in the semifinals.

There were confusing, quite possibly unprecedented scenes in the Africa Cup of Nations on Monday night as Mali racked up a convincing win over tournament debutants Mauritania.

#TotalAFCON2019 is the only tournament in the world where Adama Traore scores, comes off, another Adama Traore comes on, and scores ⚽️⚽️🥅 pic.twitter.com/XaAGJA2waJ

Traore then went and scored Mali’s fourth goal of the game in a 4-1 victory. Both Traores also scored their goals from outside the penalty area.

Mind-boggling stuff, reminiscent of the bafflement that arose during the League Two encounter between Swindon and Accrington Stanley last season during which two players with the same name were sent off.

84 – RED CARD! James Dunne shown a straight red for an altercation with a Accrington player.

Like the old terrace chants goes: There’s only two Adama Traores (and that’s if you ignore Spain under-21 international Adama Traore, who currently plays for Wolves).

Argentina beat Netherlands on pens in WC thriller
Morocco WC run shows Africans are worthy – coach
Sources: Pele had COVID before going to hospital
Galaxy fined, president suspended for hidden pay
‘The best in the world’: Why Brazil’s Casemiro is essential to their World Cup hopes