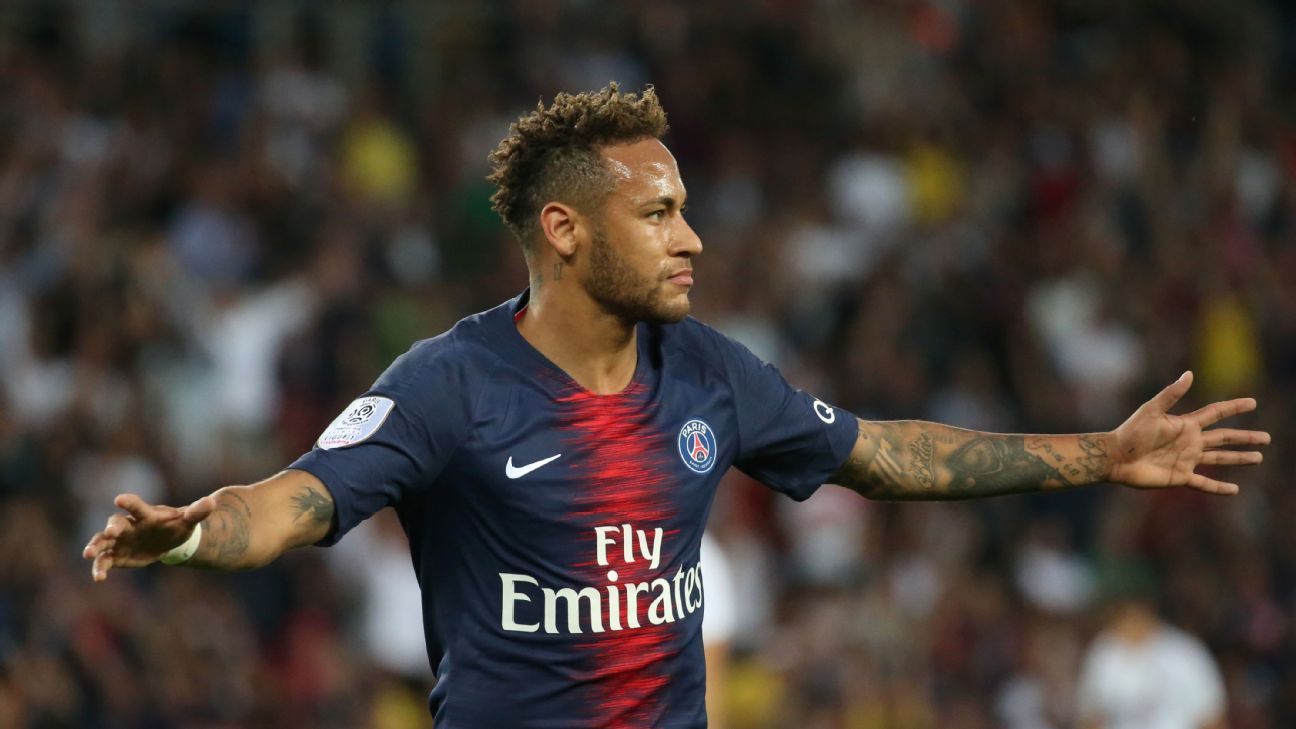 Barcelona want to sign Neymar AND Antoine Griezmann this summer, according to a report in Spain.

While Real Madrid have been busy making moves in the market, Barca have kept quiet but if they get their way, two of world football’s biggest stars could be coming to Camp Nou.

Neymar’s future at Paris Saint-Germain has been plunged into doubt in recent weeks and a return to Barcelona has been mooted, while the Catalan club’s interest in Griezmann is well-known.

Griezmann has said he wants to leave Atletico Madrid this summer, having turned down a move to Barcelona in 2018. Sport believe Barca and Griezmann have already come to an agreement over a transfer, which should be completed once the France international’s release clause drops from €200 million to €120m on July 1.

The key element in this potentially massive double deal is the cost involved. Barcelona need to sell some of their fringe stars and those out of favour this summer, with Philippe Coutinho among those at the risk of being moved on. Coutinho is seen as a potential makeweight in a deal for Neymar, and SPORT believe Ernesto Valverde is adamant he can juggle the egos of two big stars if they arrive.

Aside from the mammoth transfer fees, wages also have to come into consideration. The report claims Neymar earns €38m per season at PSG while Griezmann is said to be on €25m. It is claimed both would have to take a pay cut in order to move this summer.

10.37 BST: Manchester City are keen on sealing a deal for Atletico Madrid’s Rodri and if that goes through, Fabian Delph could be heading to the exit door, according to the Daily Mail.

10.21 BST: Tottenham Hotspur could finally be tempted to cash in on Christian Eriksen with Real Madrid, but only if they can get Marco Asensio in return, reports The Sun.

The newspaper said earlier in the week that Madrid were prepared to offer £45 million plus burgeoning star Dani Ceballos, but Spurs are said to be keen on losing the Dane only if they get a player with more experience, even if that means a loan deal for one season.

However, Los Blancos boss Zinedine Zidane has already rejected moves from Juventus for the Spain international.

Asensio has made 44 appearances for Madrid since joining from Real Mallorca in 2015, and Zidane is reluctant to lose a player of his stature, while Eriksen has one year left on his Spurs contract, with talks over an extension having stalled.

09.39 BST: Junior Firpo, the Real Betis wing back, has emerged as a target for Liverpool according to El Mundo. Junior made his debut for Betis in 2018 and has gone on to make 43 appearances for the team. The report claims Jurgen Klopp sees him as back-up for Andrew Robertson.

09.15 BST: Hector Bellerin may be out with a long term knee injury and could miss the start of the season, but that hasn’t stopped Atletico Madrid tracking him. The Telegraph believe Diego Simeone wants the Arsenal right-back and is prepared to offer Vitolo to Unai Emery in return. Emery and Vitolo won three Europa Leagues together during their days at Sevilla.

09.13 BST: Hannibal Mejbri, the 16-year-old Monaco midfielder that Manchester United are particularly keen on, has unilaterally terminated his contract after the Ligue de Football Professionne declined his appeal for the contract to be annulled, according to L’Equipe.

09.00 BST: Welcome to another edition of LIVE Transfer Talk! Stick with us throughout the day for all the gossip from the rumour mill.

Manchester United are in talks with goalkeeper David De Gea about a new five-year deal that could land the Spaniard a monster £350k-a-week salary.

The Sun reports that United are set to increase their offer from £300k, which has been on the table since January. The move represents a substantial pay raise for the stopper, currently on £200k a week, and could see him sign until 2023 with the option of a fifth year.

De Gea’s contract is up at the end of next season and United are keen to secure a player who has won the club’s player of the year award in four of the past six seasons.

De Gea’s form dipped at last summer’s World Cup with Spain and he made a number of mistakes last season, which is said to have been a red flag for potential suitors Real Madrid and Paris Saint-Germain.

De Gea is now understood to be keen to continue his stay in Manchester in an effort to add to his solitary Premier League title, though he is keen to see who United add to the squad this summer before putting pen to paper.

The Daily Mail is reporting that striker Emmanuel Adebayor could be making a shock return to the United Kingdom after leaving Turkish club Istanbul Basaksehir.

West Ham United, Sheffield United, Celtic and Watford are believed to be interested in signing the 35-year-old, who is now a free agent.

West Ham are looking to replace Andy Carroll and Adebayor is said to be keen on a return to London after spells at Arsenal and Tottenham.

Arsenal will have to increase their bid for Celtic left-back Kieran Tierney after having an offer of £15m rejected, reports The Sun.

The north London club have been told they’ll need to fork out £25m after their opening bid, believed to be £10m short of the required selling price, was turned down. This despite the Gunners offering Celtic a pick of four fringe players as part of the deal.

Celtic are open to selling their star defender, who is contracted until 2023 and is currently recovering from a double hernia operation.

Arsenal are keen to replace Nacho Monreal, whose contract runs out in the summer, though Unai Emery has only a limited transfer kitty to play with, believed to be in the region of £45m.

– Derby County have offered Frank Lampard a whopping £10m in an effort to prevent him from leaving for Chelsea. The former Blues midfielder is said to be top of Roman Abramovich’s wanted list, but the Rams are keen to hold on to the man who took them to the final of the Championship playoff in his first season. Derby are offering Lampard a four-year deal worth £2.5m a year, writes the Mirror.