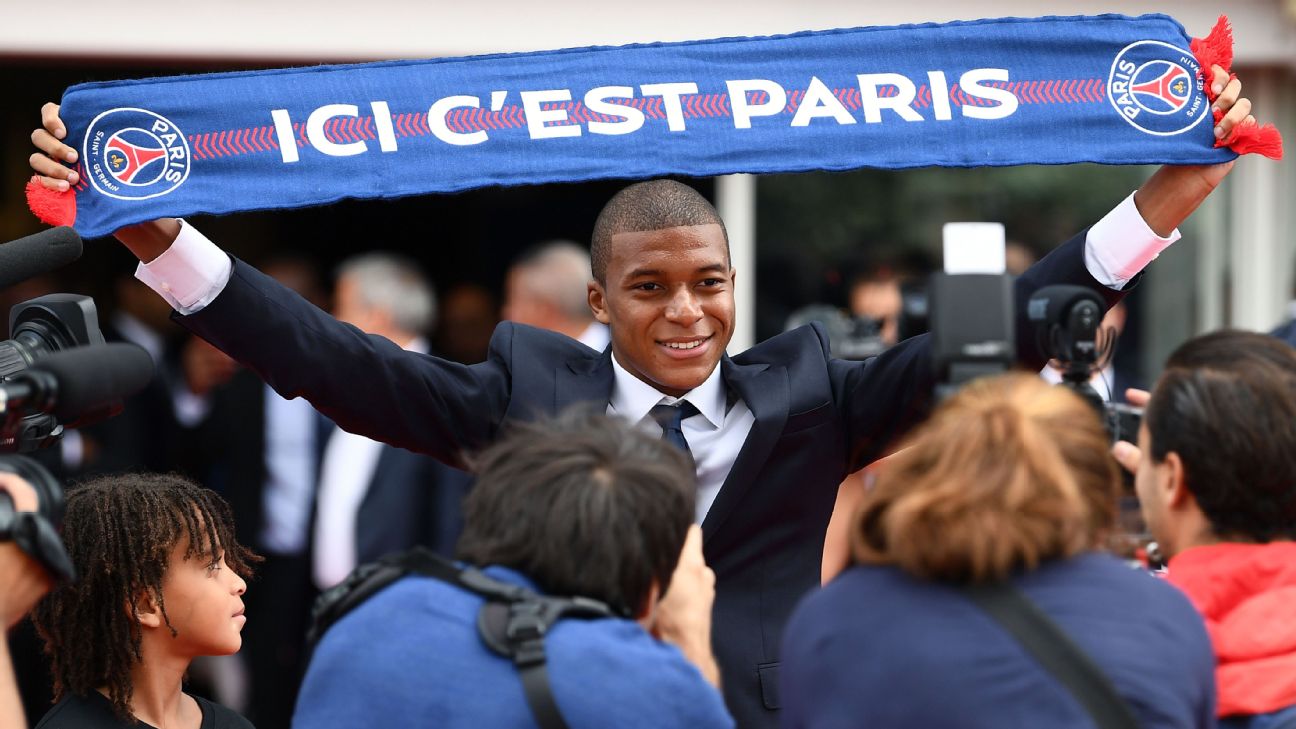 It sure seemed like everything changed in August 2017, didn’t it?

Before then, there was an established food chain in soccer’s transfer market: Barcelona and Real Madrid at the top, and then everyone else. Those two clubs were as rich as anyone and for the most part, it seemed like it was every elite soccer player’s goal to end up in the Spanish capital or Catalonia. Once you got there, you only left when you weren’t needed anymore.

In this century, the only star who left either club in his prime while still a key starter was Luis Figo… and he moved from Barcelona to Real Madrid. Other than that transaction, the two Spanish giants paid the record transfer fees; they never received them.

That is, until two summers ago, when Paris Saint-Germain triggered Neymar‘s release clause and bought the Brazilian superstar for $253.8 million. It was more than double the previous record — paid by Manchester United to Juventus for Paul Pogba the previous summer — but more importantly, it seemed like it would reset the world-soccer hierarchy.

At 25, Neymar was the presumptive Next Best Player in the World to his teammate Lionel Messi, and he left Barcelona to spend his prime playing for the team he’d just mastermind-ed a 4-0 comeback against in the Champions League. This wasn’t Kevin Durant going to the Golden State Warriors; it was Stephen Curry signing with the Oklahoma City Thunder.

– When does the transfer window close?
– Ogden: Where should Matthijs De Ligt go?
– Carter: Five players every club wants this summer
– 30 Under 21: The best young players in soccer

In case Neymar wasn’t enough, PSG also went out and signed Kylian Mbappe for the second-highest transfer fee ever, $203m that same summer. At the time, Mbappe was just 19 and could claim the same number of Ligue 1 starts as years spent on this earth. If the move for Neymar was a massive exclamation point written in the sky for everyone to see, the Mbappe transfer was a bolt of lightning shot out of that same cloud.

With perhaps the two best under-30 soccer players on the planet suddenly both on a team that was not Real Madrid or Barcelona, the weather would never be the same. The prices teams pay for world-class players would forever be distorted, the transfer market would be ruined and if the sport wasn’t already tilted in favor of the mega-rich, the moves for Neymar and Mbappe ensured the gap would continue to increase and PSG would ascend to be the dominant club in Europe.

Except two years later, not much has changed, PSG might be ready to move on from Neymar, only one player has sold for north of $80m (Eden Hazard to Real Madrid this summer), directors of football and transfer committees have invested more time and money in scouting than transfer fees and the fundamentals of the sport still look a lot like they used to.

The only thing that looks different is PSG.

The texture of the European soccer season allows teams to define success in all kinds of ways. Perhaps avoiding relegation is your goal, or maybe you want to qualify for the Europa League. Win a domestic cup? That’s an option too. Make a run at a Champions League place, try to win the league or even take a shot at the European Cup. There’s a wide variety of potential objectives to pin to your vision board before Matchday 1.

However, since the Qataris took over the club back in 2011, PSG have really only had one goal. Starting in 2012, they’ve won every Ligue 1 title except for the year before Neymar and Mbappe arrived. Domestic trophies have become a fait accompli. As club chairman Nasser Al-Khelaifi told The New York Times in 2016, “Our aim is to make the club an institution respected around the world. If we are going to make that happen, we have to win the Champions League.”

Here’s the problem with that: Everyone is way less likely to win the Champions League than they are to fall short. Based on the implied probability from the betting odds, the current favorites for next season’s European Cup, Manchester City, have about a 17% chance of lifting the trophy. City just posted back-to-back seasons with the first- and second-highest point totals in the Premier League era. They’re an incredible, historically successful team and it’s hard to imagine PSG ever building a squad with significantly better odds than Pep Guardiola’s current side.

More to the point, how do you build a team that’s built solely for a competition comprised of 13 games at most anyway, many of which are elimination games that can swing wildly based on things like away goals?

PSG’s approach has pretty clearly been to stack superstars, rather than to build depth with multiple capable contributors at every position. It’s basically what Real Madrid did and with their lack of domestic success (two titles in 10 years) but consistent continental titles (four in six years), they’re the team the Parisians are trying to emulate.

Top-heavy teams tend to have higher ceilings since they have multiple superstars who can decide games with moments that live outside the flow of the match, but they also have lower floors because if those same stars have an off day or get hurt as there aren’t as many other options to pick up the slack. Madrid’s volatility makes this clear: In the two seasons they didn’t win the Champions League since 2014, they fired three managers.

PSG have hit their floor in each of the past two seasons. They’ve been eliminated in the Round of 16 both times and Neymar missed three of those four knockout matches. They bought him so they could win the Champions League and he’s only played in 25 percent of those games that truly mattered in 2017 and 2018. At the same time, PSG have played some breathtaking soccer in the Champions League. Two years ago, they won a group that included Bayern Munich. This year, under new manager Thomas Tuchel, they topped a group with Liverpool, who went on to win the whole thing.

PSG’s European failure, especially this season’s 3-1 loss to Manchester United thanks to a last-minute VAR penalty, makes clear what Real Madrid’s recent run served to obscure: in order to win the Champions League, you need a lot of luck.

The shockwaves of both the Neymar and Mbappe transfers haven’t even had much of an impact outside of Paris, either. Real Madrid won a third-straight Champions League in the first season of the Neymar-in-France era. The same team keeps winning domestic titles every year. The only two transfer fees that were clearly inflated by the Neymar deal were the two that Barcelona made in the immediate aftermath, and in response to his exit: they shelled out the third-highest fee ever for Philippe Coutinho from Liverpool and the fourth-highest ever for Ousmane Dembele from Borussia Dortmund.

The Neymar money presented Barcelona with an opportunity to transform and fortify the club for the tail-end of Messi’s career. Instead, Coutinho was booed by Barca fans multiple times this season and Dembele has only been healthy enough to start 32 La Liga games over the past two seasons combined.

The most significant impact of the summer of 2017 might be that the Coutinho money (which was really the Neymar money) ultimately helped finance the two deals, first for central defender Virgil van Dijk and then for keeper Alisson, that helped turn Liverpool into Champions League winners. Where one club spent massively and gaudily in the hopes of dominating, those teams enriched by PSG’s money down the line have used it smartly to win instead.

As Klopp and Co. try to figure out how to protect their title, PSG seem lost as to how to find their own.

The club’s main transfer target is another expensive superstar: the 19-year-old Dutch man-child Matthijs de Ligt. Mbappe himself suggested at the Ligue 1 award ceremony last month that he might be willing to leave the club. He has, improbably, surpassed Neymar as the club’s best player and led everyone in Europe’s top five leagues in non-penalty goals+assists per 90 minutes this past season. Meanwhile, Neymar is being investigated after being accused of rape and Al-Khelaifi has openly questioned his commitment to the club, saying, “Nobody forced Neymar to sign for us. Nobody pushed him here. He knowingly signed up for this project.”

Sources tell ESPN that they’re open to selling Neymar but given how they acquired him, they’ve basically created a market in which they’re the only club in the world who can afford him. Plus, among the clubs who could conceivably swing a cheaper deal, Real Madrid have already spent a ton on attacking talent this window, Manchester City have never bought a player like him and Manchester United probably can’t attract a player like him. That leaves Barcelona who, according to a recent ESPN report, are at least looking into the possibility of re-acquiring Neymar.

Maybe that’s the most fitting end to all of the upheaval and attempted disruption. If Neymar ends up back in Spain, it’ll be like none of this ever happened.