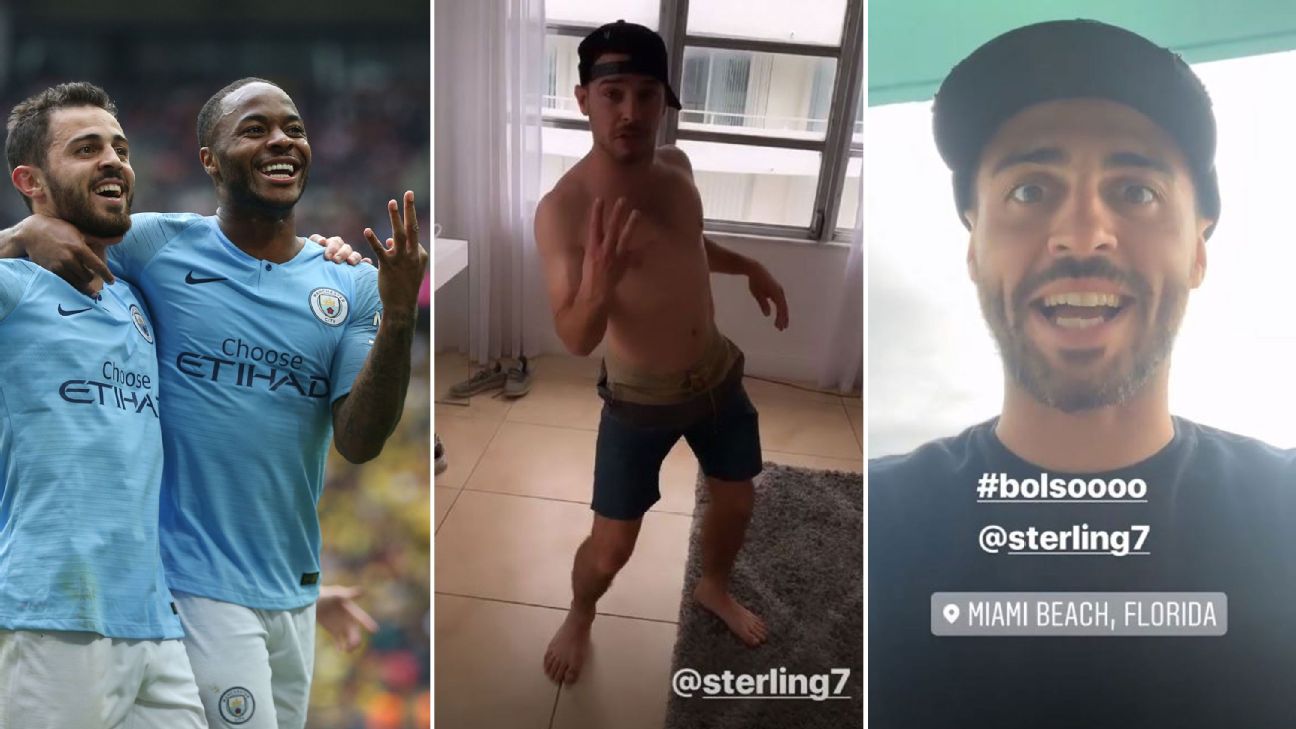 Bernardo Silva got his mate to do a Raheem Sterling impression 🤣 pic.twitter.com/KQKrwCbP2G

Bernardo Silva has incurred the wrath of Raheem Sterling after light-heartedly mocking his Manchester City teammate on social media.

While on a post-Nations League vacation with friends in Miami, the Portugal midfielder shared a video on his Instagram story of his friend imitating Sterling’s very distinctive running style.

The very next video in Silva’s story shows a message sent by Sterling in which the winger pledges revenge, whispering ominously: “Silly boy. I declare war.”

Quite what form Sterling’s vengeance is set to take remains to be seen, though you can be sure we’ll be keeping a close eye on developments.

– Carabao Cup draw to be held in a supermarket
– Beckham but no Ronaldo at Ramos’ wedding
– Meet the ‘other’ Messis! Baby, Mini, Kiwi and more

This one was good ⚽️ pic.twitter.com/8Hfcfvsy4e

After going stride for stride in the Premier League title race, the intense competition between Manchester City and Liverpool is showing no signs of abating as we move into the off-season.

City replied via their official account with an image of their favourite: the 2018-19 ball — specifically the one that John Stones narrowly prevented from crossing the line in City’s victory over Liverpool back in January.

After Sadio Mane had hit the post, Stones scrambled to clear the ball away with goal-line technology just 11 millimetres away from crossing the line.

City went on to win 2-1, bringing the Reds’ unbeaten start to the season to an end — a result which proved absolutely vital come the end of the campaign.

Khabib refused to take a photo with a Barca fan untill he said ‘Hala Madrid’ lmao
You love to see this pic.twitter.com/9ejugYLOgh

UFC star Khabib Nurmagomedov is a Real Madrid fan through and through, so when a young Barcelona supporter stepped up for a photo with the lightweight champion he got more than he bargained for.

Video on social media shows Khabib joking around with the young fan after learning he supports his rival club and refusing to take a picture with him unless he says “Hala Madrid!,” Real’s famous rallying cry.

While neither man looked like backing down during an argument about Cristiano Ronaldo, the young fan eventually gave in and reluctantly muttered the words Khabib wanted to hear.

That meant there was a happy ending as the undefeated UFC star, who fights Dustin Poirier next in Abu Dhabi in September, put his arm around the young Barca fan to pose for a hard-earned photo.

Having only been formed last year, new Australian club Western United FC have quite literally geared up for their inaugural A-League campaign by revealing their first-ever kits.

United will wear a fairly straightforward green-and-black striped uniform at home but their maiden away kit is a little more esoteric.

In fact, opinion is likely to be split right down the middle by the bold geometric design.

While retro kits definitely scratch the nostalgic itch, there is something to be said for trying something new with a daring modern strip.