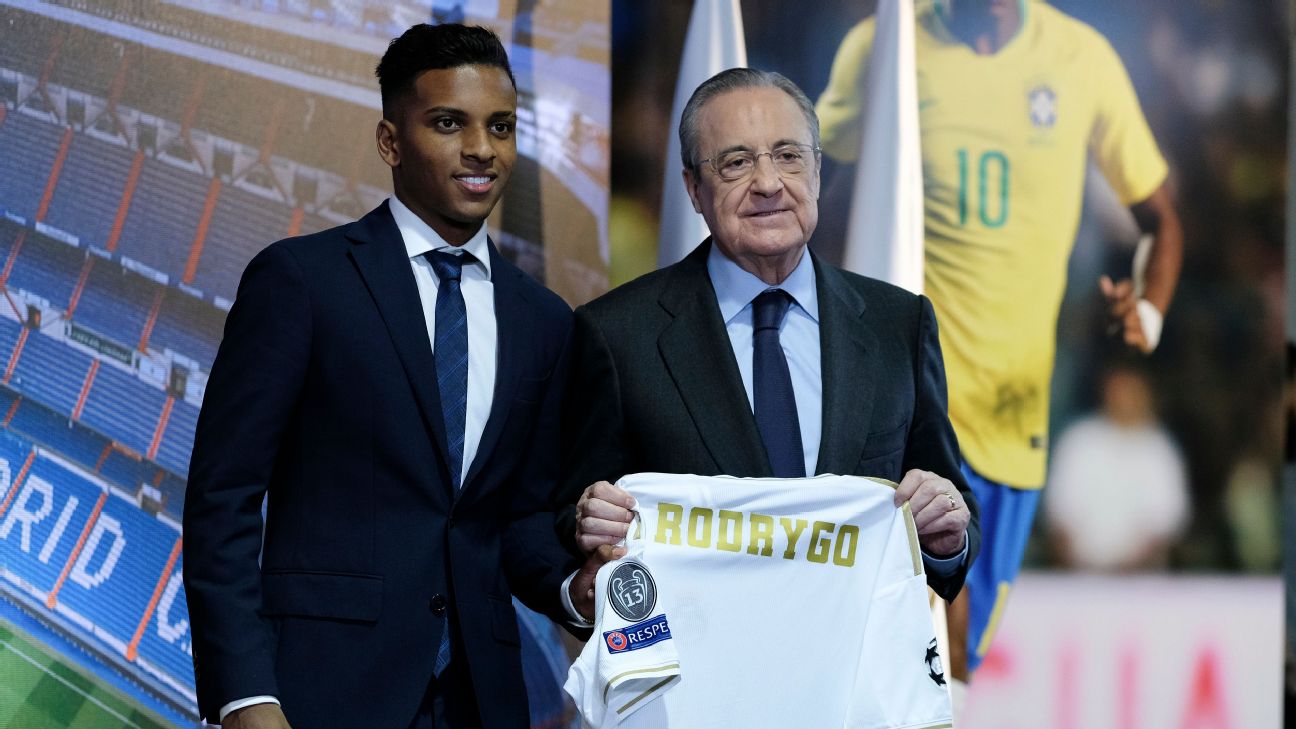 Real Madrid’s new signing Rodrygo is aware of the huge competition for places and said on Tuesday that he was prepared to spend time in the reserves as he beds into his new surroundings.

Rodrygo, 18, agreed to join Madrid last year on a €45 million deal shortly after breaking into the first team at Santos, the Brazilian club that produced Pele and Neymar.

When asked about his playing style, he said he identifies with Neymar and former Real Madrid player Robinho.

“I am a fast forward, I score and make plays, I’m Brazilian and that’s how we are, like Robinho, Neymar … I identify a bit with them,” Rodygo said at his presentation at Madrid’s Santiago Bernabeu stadium.

Last year he became the youngest player to score in the Copa Libertadores, South America’s equivalent of Europe’s Champions League, missing school to net for Santos against Uruguayan side Nacional.

Rodrygo joins Madrid a year after fellow Brazilian teenager Vinicius Jr moved to the Spanish capital, storming into the first team after spending his first few months with Real’s reserve side Castilla in the third tier of Spanish football.

Madrid’s latest arrival said he was prepared to do the same.

“Madrid will always have the best players in the world and I’m ready to do whatever the club wants, to play in the first team or Castilla,” Rodrygo said.

“Here the pressure is bigger than anywhere else and Vinicius has told me that I have to be patient. But I’m young and I will be. Things are going to develop naturally.”

Rodrygo said he did not expect his first season at Madrid to be plain sailing but was excited to be joining the 13-times European champions.

“I’m in my first season in Europe and there might be difficult moments but I’m prepared for that and I’m sure I’m going to have a lot of happy moments,” he added.

Real Madrid president Fiorentino Perez called the youngster “one of the emerging stars from Brazil.”

“Our strategy is the search of emerging talent and to incorporate youth who want to make their mark at Real Madrid,” Perez said. “[Rodrygo] is already admired for his play in a country where football is a form of life.”

Rodrygo is the fifth player to join Madrid in the close season as part of an ambitious squad rebuild that has already cost more than €300 million.

Real are looking to make amends for a woeful last campaign in which they finished an unprecedented 19 points adrift of La Liga champions Barcelona.

The influx of new talent has put into question the futures of current stars such as Gareth Bale.

Bale’s agent said on Sky Sports on Tuesday that “it would take something exceptional” for the Wales captain to leave the Spanish capital. Bale has been rumoured with return to Tottenham Hotspur or a loan to Manchester United.

“He could fit in there [at Manchester]. I think he could do very well — he is still one of the best players in the world. But it is very unlikely,” Jonathan Barnett said of his client Bale.

Barnett had told ESPN FC on Monday that a rumoured move to Bayern Munich was “rubbish.”

Pele to Brazil squad: I will cheer from hospital
Pele responding well to treatment for respiratory infection – hospital
Sources: Arsenal’s Gabriel Jesus out 3 months
Walker: I won’t roll out red carpet for Mbappe
Eto’o filmed in altercation outside WC stadium