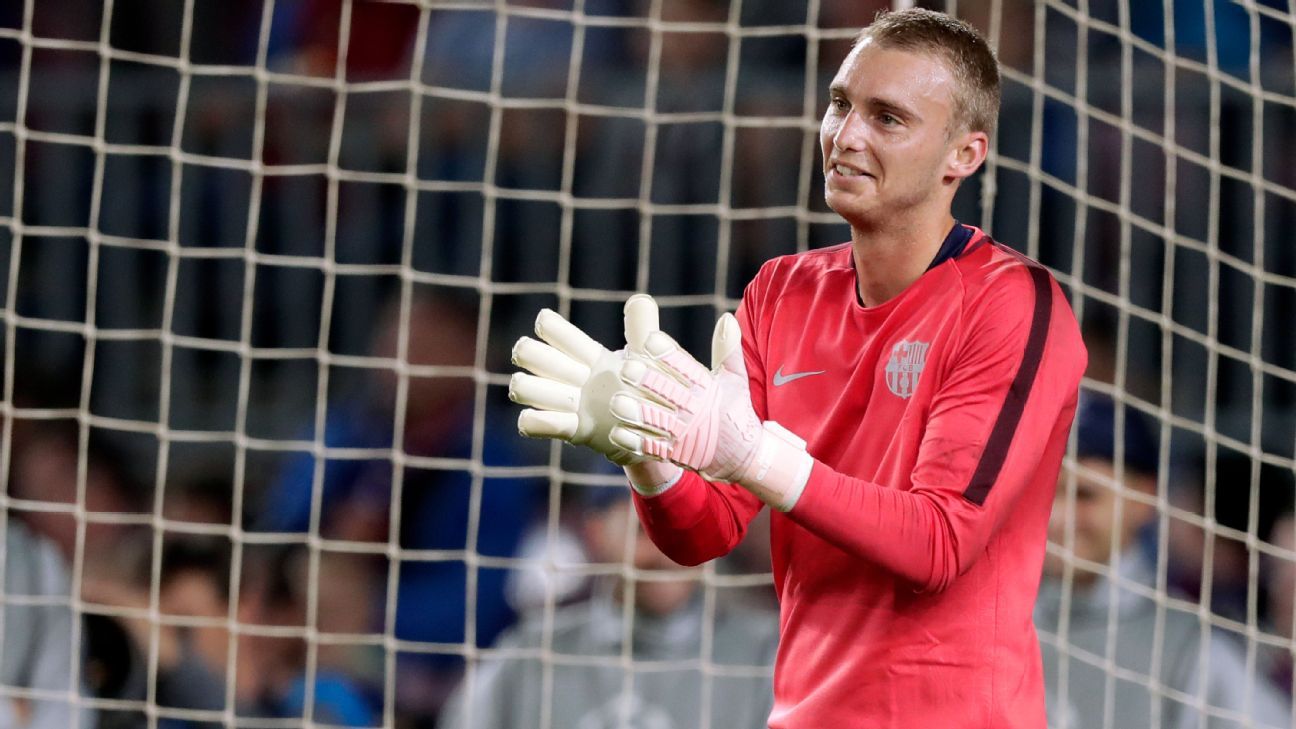 Catalan daily Sport reports that Barcelona goalkeeper Jasper Cillessen is interesting a number of Premier League clubs, with Manchester United, West Ham and Everton all said to be possible destinations.

With David De Gea‘s future at Old Trafford uncertain amid links with Real Madrid, United have been credited with interest in several top keepers including Jan Oblak, Keylor Navas and Hugo Lloris.

But Diario Sport writer Albert Roge has said Everton are favourites to sign the keeper.

Netherlands international Cillessen has made it clear that he wants to leave Camp Nou having failed to take Marc-Andre ter Stegen‘s place, and sources at Barca have told ESPN FC the club hope to hold out for €30m for the former Ajax keeper.

The 30-year-old was linked with United when Louis van Gaal took over in 2014 after leading Netherlands to that summer’s World Cup semifinals.

22.09 BST: The Mirror writes that Liverpool’s chances of signing RB Leipzig forward Timo Werner have increased as Bayern Munich have cooled their interest in the German international, although the Red Bull-backed club’s £50m valuation could be a stumbling block for Jurgen Klopp’s side.

21.22 BST: Real Betis are closing in on a deal for Fulham striker Aleksandar Mitrovic, despite the London club setting the asking price at £30m and the Spanish side only offering £22m, according to the Star, beating the likes of West Ham, Bayer Leverkusen and Fenerbahce to the 24-year-old Serbia international.

20.35 BST: If Leicester City are presented with a bid of more than £80m, they’ll allow Harry Maguire to leave the King Power, and the Mirror writes that should such a scenario unfold, the Foxes have identified Burnley’s James Tarkowski as the man to replace his fellow England international in the heart of defence.

19.01 BST: Tanguy Ndombele, Donny van de Beek, Nicolo Zaniolo and Ryan Sessesgnon are the four players Mauricio Pochettino wants Tottenham to sign this summer, according to the Guardian, which adds that the sale of wantaway midfielder Christian Eriksen could be the key to Spurs affording the expensive quartet of burgeoning talents.

18.14 BST: Arsenal are stalling on a deal to bring Yannick Carrasco to the Emirates because Unai Emery would prefer to sign Bournemouth’s Ryan Fraser instead, according to the Mirror.

17.27 BST: The Telegraph reports that sources inside Chelsea believe the appointment of Frank Lampard as the club’s next manager is “inevitable.” With the Blues set to receive £5m from Juventus for outgoing manager Maurizio Sarri, they will send £4m of that to Derby to free Lampard to return to Stamford Bridge. He’s yet to agree to take over at Chelsea, but the Telegraph adds that Lampard “would find it incredibly difficult to turn down the club he spent 13 years at as a player.”

15.38 BST: Celtic could make a move for Alaves forward Patrick Twumasi, according to reports, which say the Scottish champions were impressed with Twusami when he played against them for Astana in Champions League qualifiers.

14.03 BST: To the Championship, where QPR have signed goalkeeper Liam Kelly from Scottish club Livingston for an undisclosed fee.

13.47 BST: Leeds are braced for a £14m offer from Aston Villa for midfielder Kalvin Phillips, according to the Mirror, which says they will not consider selling him for less than £20m.

It adds that Villa “feel they can land the 23-year-old” after winning the Championship promotion playoffs, in which Leeds were beaten semifinalists, but the Yorkshire club are determined to keep him.

13.15 BST: France international Tiemoue Bakayoko, who spent last season on loan at AC Milan from Chelsea, has said he would like to play for PSG in the future, telling L’Equipe: “Yes, of course I would like to play in Paris — I cannot lie about that. It would mean a lot to me and my loved ones. We are real Parisiens.”

12.43 BST: Manchester United remain interested in signing Sean Longstaff despite the midfielder saying he is happy at Newcastle, sources have told ESPN FC.

Longstaff has been targeted by United manager Ole Gunnar Solskjaer as he looks to bring in the best young British players in a squad revamp.

12.21 BST: Back to Leicester — and why not? — where winger Harvey Barnes has signed a new five-year contract that keeps him at the club until 2024. Barnes became a regular part of the Leicester lineup in the second half of last season after being recalled from a loan spell with West Bromwich Albion.

Fornals, 23, has signed a five-year contract with the Hammers.

11.53 BST: Leicester boss Brendan Rodgers could go back to his old club Celtic to sign midfielder Callum McGregor, with Leicestershire Live reporting that he would cost the Foxes around £10m.

McGregor, who scored three goals for the Scottish champions last season, has also been linked with both Brighton and Watford.

Kubo, who has been described as “the Japanese Messi,” was once on Barcelona’s books and made his debut for the Japan senior team earlier this month. The 18-year-old will represent his country at the Copa America in Brazil.

He will play next season for Castilla in Spain’s third tier while training with Zinedine Zidane’s senior side, following the policy set with the signings of Martin Odegaard and Vinicius Junior.

11.23 BST: Manchester City’s England defender Kyle Walker is poised to sign a two-year contract extension that would keep him with the Premier League champions until 2024, the Manchester Evening News reports.

10.07 BST: Stoke’s England international goalkeeper Jack Butland is a target for both Bournemouth and Aston Villa, according to Sky Sports.

It reports that Butland, who would cost more than £20m, wants to return to the Premier League in order to boost his international chances.

08.50 BST: Real Madrid forward Borja Mayoral does not know where he will play next season but doesn’t believe it will be at the Bernabeu. Mayoral scored three goals and set up two more in 29 league appearances, 16 as a starter, while on loan at Levante in the 2018-19 campaign.

Mayoral, whose contract with Los Blancos runs until June 2021, revealed earlier this month that Real Sociedad are interested in his services.

The 22-year-old told Cadena Ser radio while on international duty preparing for the European Under-21 Championship: “I don’t even know [where I will play]. I’m focused on the European Championship and we will see. I bet that I will leave Real Madrid. Real Sociedad is ahead on the list.”

08.25 BST: Espanyol have offered a new contract to €40m-rated centre-back Mario Hermoso despite knowing the reported Atletico Madrid target could leave in the summer.

Madrid-born Hermoso, 23, joined Espanyol from Real Madrid’s youth system in 2017 and has since established himself as a top performer in La Liga and a regular member of the Spain squad.

Marca reports that Los Blancos retain the right to re-buy their former player this summer for €7.5m, while Atletico are said to be confident they can sign the player whose current release clause is €40 million.

08.00 BST: One of the Premier League’s most creative players last season, Ryan Fraser, says he expects to remain at Bournemouth next season despite Arsenal’s long-standing interest in him.

Only Eden Hazard claimed more than Fraser’s 14 Premier League assists last season, while the 25-year-old’s total of 271 crosses was second only to Everton’s Lucas Digne.

“The likelihood is I will be at Bournemouth for another year,” he is quoted as saying in the Daily Mirror. “And what will happen will happen. That is all I can really say about it. No one has really spoken to me about it.”

PAPER TALK (by Nick Judd): Koscielny out, Saliba in

Arsenal’s defence is about to experience a facelift if boss Unai Emery gets his way.

The Mirror reports that Emery is looking to swap experience for exciting young talent as he prepares for life after captain Laurent Koscielny, who looks set to begin talks with Borussia Dortmund.

Emery has identified an number of reinforcements. The first is St Etienne youngster William Saliba, who could cost up to £27m. Talks for the 18-year-old are under way, with Emery prepared to loan him back to St Etienne as part of the deal.

After we reported two days ago that Matthijs de Ligt could be set for a dramatic move to Atletico Madrid, it then seemed a move to Paris Saint-Germain was inevitable.

However, agent Mino Raiola has said that is “fake news,” the Sun reports.

De Ligt has been a target for many top clubs, with Barcelona seemingly favourites to sign him having conducted talks with Ajax, and PSG close behind. Both Manchester City and Manchester United are also keen.

Raiola claimed recent PSG rumours started because he was photographed with a French journalist in Paris, and that he didn’t know the person with whom he was pictured.

– The Mail reports that Manchester City have been put off making an offer for Leicester and England defender Harry Maguire after the Foxes slapped a £90m price tag on him.

Pep Guardiola has identified Maguire as Vincent Kompany‘s replacement, but the club is prepared to walk away if the clubs can’t agree on a lower fee. United, however, have not been put off and are ready to continue their pursuit of Maguire, sources have told ESPN FC.

– Adrien Rabiot is set for a sensational transfer U-turn which would see him stay at PSG after being frozen out this season. The France international has trained with the reserves, been suspended and fallen out with club officials, but with sporting director Antero Henrique looking likely to leave, Rabiot’s chances of staying have increased.

Heitinga to coach Ajax for rest of the season
Ryan Reynolds has talked more Wrexham than Deadpool these days. He’s OK with that.
Valencia sack Gattuso amid relegation fears
What’s next for USMNT without sporting director, GM or coach?
Man Utd cruise to set up EFL final vs. Newcastle