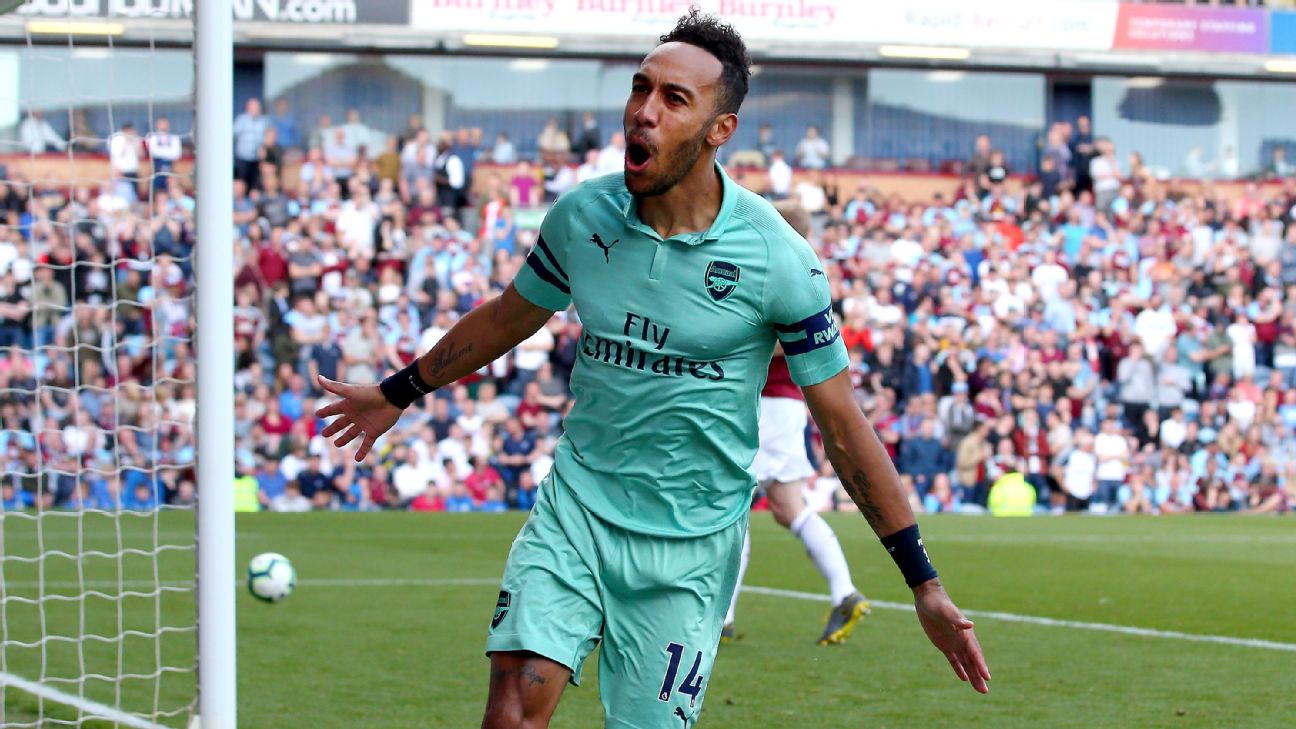 Arsenal are ready to spend big in the next few weeks to ensure that Pierre-Emerick Aubameyang and Alexandre Lacazette remain at the club when the new season kicks off in August.

Aubameyang has been the subject of interest from Chinese clubs who aren’t shy when it comes to splashing the cash, with Guangzhou Evergrande and Shanghai SIPG both rumoured to be waving enormous wads of cash in Aubameyang’s face in an attempt to lure him to the country’s Super League.

Now the Mirror reports the Arsenal hierarchy is prepared to sanction a whopping increase to Aubameyang’s current deal, handing him £190,000 per week to keep him in North London. And given he shared the Premier League’s Golden Boot in an otherwise underwhelming season at the Emirates, that’s hardly surprising.

Speculation surrounding his strike partner Lacazette has also put the Frenchman in line for a pay raise after being linked with a switch to Barcelona and Atletico Madrid since the end of the season, with the Emirates brass aiming to tie him down as they try to return Arsenal to past glories.

09.55 BST: Frank Lampard will be appointed as Chelsea’s new manager to replace the outgoing Maurizio Sarri, according to The Sun.

And, according to the paper, Lampard wants to bring in his former teammate Didier Drogba back to Stamford Bridge with him, although not ex-Blues captain John Terry.

Lampard led Derby County to the Championship playoff final this season, where he lost to an Aston Villa side where John Terry is assistant to manager Dean Smith.

Sources have told ESPN FC that Sarri is set to leave Chelsea and take over at Juventus after the Italian champions agreed to pay around £5m in compensation.

The reasoning behind the ban — which meant Raiola would have been unable to do deals until Aug. 9, the day after the close of the Premier League transfer window — was not made clear.

The 51-year-old appealed to the Italian FA’s disciplinary committee, which said on Thursday that it had lifted the three-month punishment.

Raiola is now free to conduct business for clients such as De Ligt, and he has been in the French capital this week to negotiate a deal with Paris Saint-Germain.

Meanwhile, sources told ESPN last month that Pogba was pushing for a summer move out of Manchester United, with Juventus interested in re-signing the France midfielder.

Chelsea star Willian is set to sign a new two-year deal at Stamford Bridge, as the club tries to ward off interest in the player from Spanish giants Barcelona.

That’s the claim from The Sun, which says that the Brazilian maestro is “on the brink” of staying in West London. That is not only good news for Chelsea fans bracing themselves for life with a transfer ban, but also a further indication that the club have ditched their long-term philosophy of offering players only one-year deals once they’ve turned 30.

David Luiz was the first to benefit from that departure from policy and now it looks as if his Brazilian teammate is getting in on the act. Barcelona had been linked with a £30m move for Willian, a player they had been linked with back in January. Chelsea, meanwhile, risked waving goodbye to him for nothing at the end of next season if they hadn’t moved fast to secure his services.

After a week that saw Eden Hazard leave the Europa League champions, this counts as some good news at last.

The destination of Aaron Wan-Bissaka remains one of the summer’s major talking points, and although Palace are thought to be holding out for an offer of at least £50m for the 21-year-old, the player himself would still favour a move to Old Trafford.

At least that’s what Sky Sports is claiming.

Wan-Bissaka is one of English football’s hottest prospects and shone in the Palace side last season — sparking huge interest in his services from the big boys. United have already laid down a £40m offer for his services, but the player is contracted to Palace until 2022, meaning that the South Londoners are in no rush to cash in when his value looks set to keep on rising.

– Timo Werner‘s chances of turning up at Anfield next season have increased, with Bayern Munich’s interest in the player waning. So says the Mirror, which also claims that Bayern are more interested in bringing Leroy Sane back to Germany rather taking the forward off RB Leipzig’s hands.

– Ajax ace Hakim Ziyech has been linked to a number of clubs since helping the Eredivisie side to the brink of the Champions League final this season. The Mirror reports that Arsenal and Liverpool lead the chase, but he won’t come cheap with the Dutch champions seeking in excess of £30m to let him go.