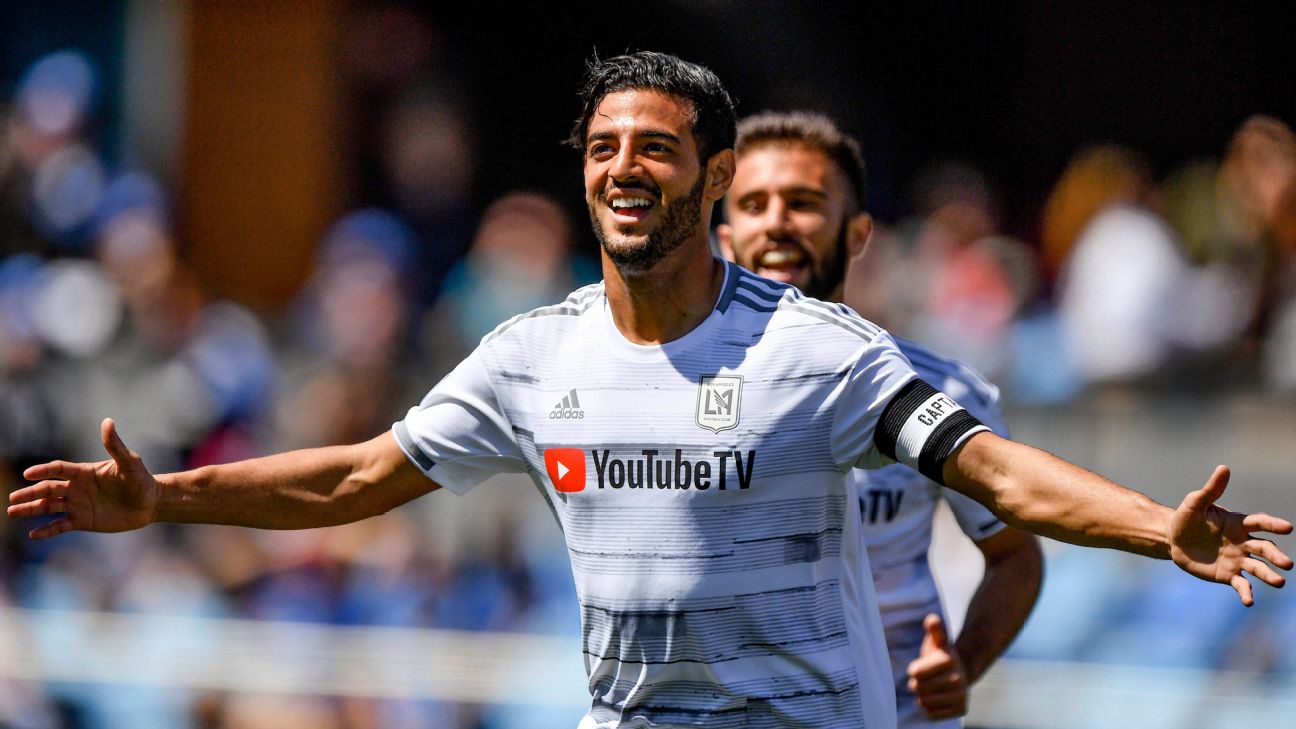 The official start of summer isn’t set to begin for almost two weeks, yet the dog days in MLS are most definitely here. The temperatures have heated up, and the separation between the haves and have-nots has begun. The Eastern Conference is a jumbled mass — or is that mess? — with eight points separating the first-place Philadelphia Union and sixth-place New York City FC. But LAFC is threatening to turn the quest for the Supporters’ Shield into a one-horse race, despite the best efforts of the LA Galaxy and the Seattle Sounders.

As for the MVP race, that is turning into just as much of a runaway, although there are some notable candidates capable of closing the gap.

It’s looking more and more like Josef Martinez‘s single-season goal-scoring record might last all of one year. Vela hasn’t slowed down his pace in the slightest, scoring 16 goals in 16 matches, along with a league-leading 10 assists. Granted, it helps when opposing teams gift Vela chances, like the Portland Timbers did in LAFC’s last game. But the LAFC forward has converted more difficult opportunities, as well.

And that’s not the only record Vela might break.

Sebastian Giovinco holds the mark for the most combined goals and assists in a single season with 38 (from 22 goals and 16 assists) in 2015. That mark is well within reach, especially considering that Vela leads the league in just about every creative category, including chances (53), key passes (47) and big chances created (14), according to ESPN Stats & Information research.

So will Vela break the record? Certainly things like health come into it, not just for him, but for his teammates, as well. And with him opting out of appearing in this summer’s Gold Cup, he should remain plenty fresh to continue his assault on the record books.

Could have a part to play, but will need help

Ibrahimovic has been scoring at almost as impressive of a rate as Vela, with 11 goals in 12 matches. But Ibrahimovic’s problem is that his behavior on the field and off has drawn plenty of scrutiny, including a two-game suspension for an altercation with New York City FC goalkeeper Sean Johnson on May 11. To make the MVP race — and the aim of finishing atop the Western Conference — competitive, the 37-year-old must stay on the field more consistently. Vela will have to go through a cold streak, as well.

So much attention has been placed on Atlanta’s tepid play — at least relative to last year — that Martinez has flown under the radar. And yet there he is, third in the league with 10 goals in 15 matches this season. Atlanta has benefited from Martinez’s form, as well, and it is two points out of first place in the Eastern Conference. Martinez’s absence for the Copa America tournament could slow his progress, in terms of energy expended. And of course, Martinez’s biggest impediment just might be his own manager, given Frank de Boer’s more conservative tendencies, as compared to predecessor Tata Martino. Then again, Martinez looks like he is beginning to adapt to de Boer’s style. The rest of the league is now on notice.

The best of the rest

Vela — and to a lesser extent Diego Rossi — might have received the headlines, but the defensive work put in by the LAFC trio of Latif Blessing, Mark-Anthony Kaye and Atuesta has been off the charts. Each of them ranks in the top eight in MLS in terms of recoveries, led by Atuesta’s 150. And it is Atuesta that has sat the deepest of the three, providing a bulwark in front of the back line that has conceded just 13 goals in 16 games, good for second in the league.

Rooney’s campaign hasn’t quite gone as smoothly as last year, and the same is true for D.C. United, now winless in its past five games. A congested schedule hasn’t helped. But Rooney’s eight goals still are enough to tie him for fourth in the league. That said, Rooney will need to get on a hot streak to make up some ground, and he won’t be able to rely on the home-heavy schedule he had last year.

Nani was one of those signings that practically screamed, “He’s too old!” But the 32-year-old attacker has nearly equaled the stats of his former Manchester United teammate Rooney, with eight goals and four assists. The only problem is that Orlando City still finds itself below the playoff line, and the team will need to do better for Nani to get some consideration.

Fernandez looks primed to be this year’s Rooney. Not only does he have the skill and power to tear up the league, but he has the benefit of a home-heavy schedule to finish the season that will see the Timbers play 16 of their final 21 at Providence Park. The Argentine is certainly off to a great start with four goals in his first three games.

The Spaniard has cooled off after a blazing-hot start, but he still has been immense for the Reds. He is right behind Vela in most creative categories, despite not joining Toronto until the end of March. The biggest factor in Pozuelo’s candidacy could be a healthy Jozy Altidore. If the U.S. forward can come back from the Gold Cup close to top form, Toronto could begin climbing the table again.

“La Panterita” continues to be the driving force behind Houston’s impressive season. Not only has he scored five goals, but he has shown an eye for the killer pass, as well, with 10 big chances created (tied for second in the league) and six assists. Questions continue to swirl about his future plans, but if Houston can convince him to stay throughout 2019, it could be a season to remember for the Dynamo.

Just a few weeks ago, there were questions as to whether Wondolowski could get back in the Quakes’ starting lineup and how that would impact his quest to break the all-time regular-season scoring record. Now he looks unstoppable, scoring eight goals in his past four games. The 2012 MVP knows what it’s like to be on a hot streak, and with his Quakes teammates looking more and more comfortable under the system of manager Matias Almeyda, Wondolowski could yet climb up the MVP ladder.