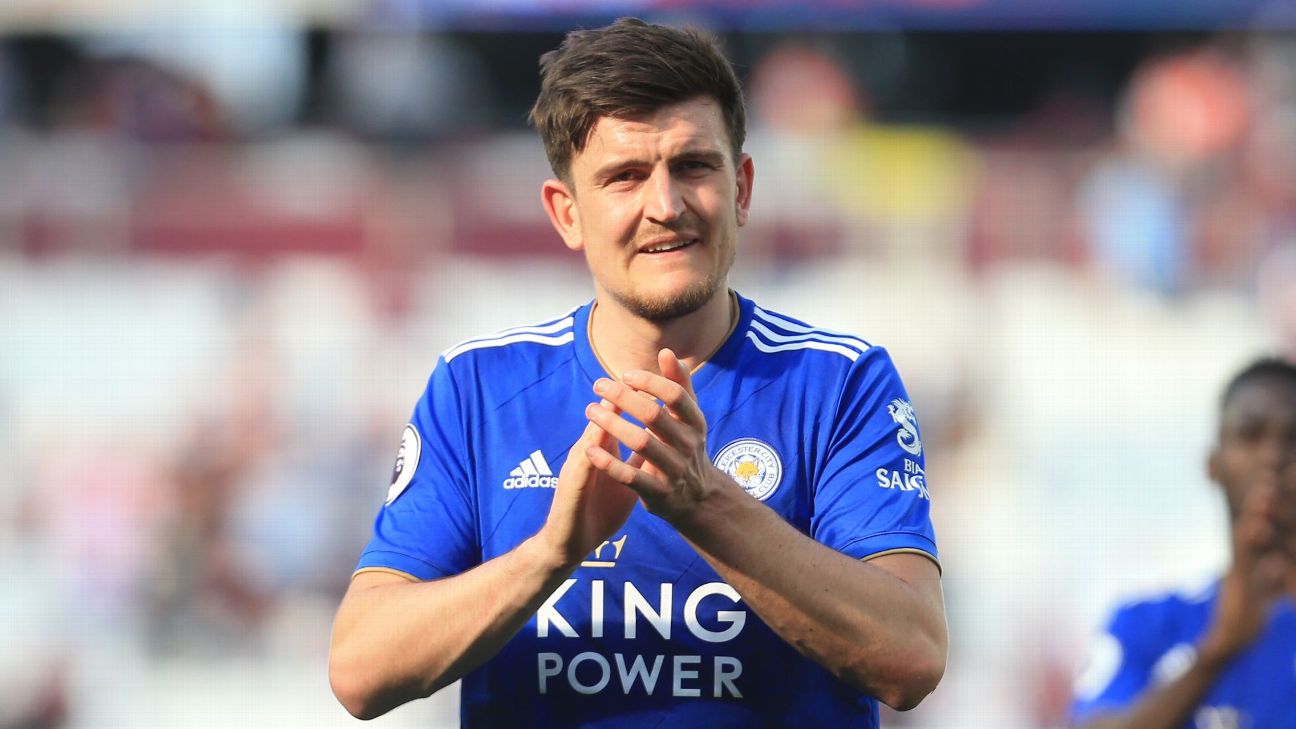 The Premier League transfer window is open. Click here to review all the latest transfers and, below, keep up to date with the latest gossip

Manchester United and Manchester City are set to go head-to-head to land England and Leicester centre-back Harry Maguire, according to Sky Sports.

Sources have told ESPN that United are ready to renew their interest in Maguire, having failed to sign him last summer when Leicester put his price at £80m.

Sky claim that this time around the club won’t even name a price for the 26-year-old because they don’t want to sell — though that £80m figure appears again in the story, which would be a world-record fee for a defender after the £75m Liverpool spent on Virgil van Dijk last year.

Maguire has evidently got no major desire to move on, and only signed a new five-year contract in September, though Leicester are lining up Burnley defender James Tarkowski as a replacement should it happen.

09.58 BST: Fulham flop Andre Schurrle has returned to Germany where he is preparing for the new season in Berlin. Technically still under contract at Borussia Dortmund, the 2014 World Cup winner is unlikely to wear the black and yellow jersey again and German tabloid Bild have linked him with a move to Lazio.

09.41 BST: Real Madrid left-back Marcelo has no intention of leaving and is focused on fighting for his place despite the pending arrival of France international Ferland Mendy, a source close to the player has told ESPN FC.

Marcelo has won 20 trophies including four Champions Leagues since joining the club in 2007, but the 31-year-old had a poor 2018-19 season during which he lost his place to youngster Sergio Reguilon.

Although Zinedine Zidane’s return in March saw Marcelo return to the first team, the French coach has played a key role in the €55m deal to sign Lyon player Mendy which, sources have told ESPN FC, is due to be completed this week. However a source close to Marcelo said that Mendy’s signing would not change anything for the Brazilian future.

It’s official – Paulo Fonseca will be the new head coach of #ASRoma!

09.14 BST: Speaking of Man City, the Premier League champions need a replacement for Vincent Kompany at some point and TalkSPORT claim they have found one.

Young Brazilian defender Murilo is a much cheaper option than Harry Maguire. The Cruzeiro centre-back, 22, is valued at around £15m and is also attracting attention from Bayern Munich, Atletico Madrid and Monaco.

08.57 BST: West Ham are unlikely to make a move for Manchester City’s Fabian Delph during the transfer window, sources have told ESPN FC.

The England international has been told that he can leave the Etihad Stadium this summer after falling down the pecking order in Pep Guardiola’s first team squad.

City want around £15m for the 29-year-old, who is entering the final year of his contract, but the Hammers have been put off by the fee along with the wages that the former Aston Villa and Leeds midfielder would command.

Tied to Barcelona until June 2021, the 25-year-old is looking to earn more playing time after a disappointing six-month loan spell at Arsenal where he made just four league appearances.

According to the Valencia-based publication, Barca’s asking price of €20m is considered excessive and Valencia will only make a move for Suarez if the Spanish champions lower that figure.

08.05 BST: Joao Felix‘s future will be decided this week amid interest from Manchester City, Manchester United, Atletico Madrid and Juventus, according to Record.

The rising Benfica star is currently on holiday in Ibiza after winning the UEFA Nations League with Portugal on Sunday. According to Record, talks regarding the sale of Felix will resume today. The 19-year-old winger, reportedly has four offers, including two from clubs that are willing to pay his €120m release clause.

Record claims that Benfica president Luis Filipe Vieira is resigned to losing Felix. However, Benfica are hoping to reach an agreement that would see Felix remain on a season-long loan at the Estadio da Luz. According to Record, Atletico are prepared to offer €60m plus another €20m in variables. They want to convince Felix by creating a project around him in the coming years.

Spurs may go in for Marseille’s Sakai

Tottenham Hotspur are eyeing Marseille right-back Hiroki Sakai, according to Sky Sports, although the London side may have concerns about the Japanese star’s age.

Sakai, 29, could be seen as a suitable replacement should they move on from Kieran Trippier and Serge Aurier. Nonetheless, Mauricio Pochettino may prefer a younger reinforcement.

The former Hannover 96 man has been to two World Cups for Japan, and joined Marseille in 2016.

Everton and Arsenal are both in the running for highly rated Getafe defender Djene Dakonam, but the Toffees look to have the edge when it comes to winning the player’s signature, writes the Daily Mail.

Dakonam starred as Getafe finished fifth in La Liga, and Everton boss Marco Silva is looking to reinforce his defensive ranks, particularly as he faces the threat of losing loanee Kurt Zouma.

The 27-year-old is likely to cost the Merseysiders around £30m, a figure that could prove too much for Arsenal and their seemingly limited war chest. The Gunners look set to spend well under £100m this summer, and so they’ll need to shop smart in an effort to improve their squad.

Silva, on the other hand, looks set to be well backed as the Blues hierarchy look to challenge for a European place.

Newly promoted Aston Villa are prepared to spend up to £20 million to secure the services of Jack Butland, reports The Sun.

Villa join the race for the popular stopper, who has also been earning admiring glances from the likes of Bournemouth and Crystal Palace.

Stoke City value their man at nearer £25m, a figure that has put off some potential suitors, but Villa boss Dean Smith is keen to start the new season with a top-class keeper with Premier League experience.

Villa’s owners have the spending power to afford Butland, while the keeper himself would be keen on a move in an effort to reignite his England career.

– Arsenal are still looking to replace Aaron Ramsey, and Unai Emery has decided that Fiorentina star Jordan Veretout could fit the bill. The 26-year-old is looking for a move this summer and though heavily linked with Napoli, his agent has admitted that his client is still considering options both in Italy and abroad.

– Maurizio Sarri‘s Chelsea exit could be confirmed this week, with one Chelsea shareholder saying farewell to the Italian boss via his Instagram account. Sarri has been linked with a move away from London form some time, and even Chelsea’s Europa League win doesn’t seem to have altered the club’s plans. Hasan Nagoor’s social media post is the latest hint that Sarri is set for a return to Italy.

Follow live: Belgium, Croatia meet with World Cup hopes on the line
Mexico win, but late Saudi Arabia goal knocks El Tri out of World Cup
No charges over racist chants towards Vinicius
JAJALO RISPONDE A NDZENGUE, 1-1
You can’t go deep in a World Cup if you can’t score goals; the USA were doomed