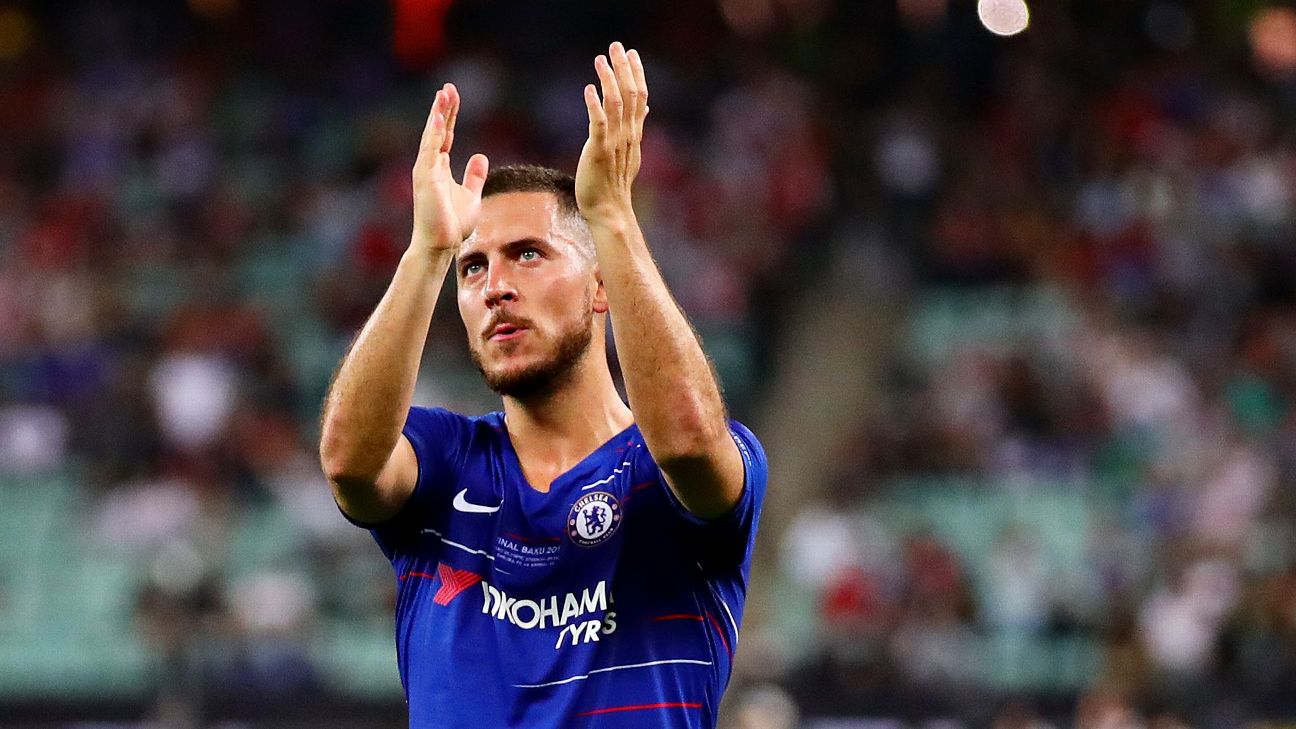 Eden Hazard is set to complete his long-anticipated move to Real Madrid after the clubs announced a deal had finally been agreed on Friday evening.

Sources told ESPN FC on Wednesday that Chelsea had accepted an offer of an initial £88.5 million from Madrid for Hazard, whose deal with Real will run until 2024, with significant add-ons and bonuses that are expected to be reached and that could push the total payout to £130 million.

Hazard will undergo a medical on Thursday before signing his contract and being presented at the Bernabeu.

In a statement issued on his social media accounts on Friday, Hazard insisted he would never have considered leaving Chelsea for any club other than Real Madrid and thanked owner Roman Abramovich for granting his wish to join the Spanish giants.

“You now know that I will be joining Real Madrid,” he said. “It’s no secret that it was my dream to play for them since I was a young boy just scoring my first goal. I have tried my very best not to distract myself or the team through this difficult period of speculation and media attention, especially the last 6 months.

“Now the clubs have reached an agreement I hope you understand I had to pursue my next chapter, just as each and every one of you should when you have the chance to pursue your dreams. Leaving Chelsea is the biggest and toughest decision in my career to date. Now it’s in the open I would like to put on record one thing was always clear to me, I have loved every moment at Chelsea and not once did I ever consider, nor would I have left for any other club.

“Chelsea and especially Chelsea fans will always be special to me and next season I will look for your results first. I hope that we are drawn against each other in the Champions League next season and every season so we can meet again.

“Before I go, one last thank you to everyone at the Club for their tremendous effort as we lived through every moment. To all of my ex-Colleagues we will say our goodbyes at the right time but I must thank the owner Mr Abramovich and his board for helping me realise not one, but two dreams, my first in becoming a Chelsea player and today my second, becoming a player at Real Madrid.”

Madrid coach Zinedine Zidane had made signing Hazard a priority, as he revamped his squad after a disappointing season, with Chelsea having resigned themselves to selling their star player before he entered the final year of his contract.

Hazard will leave Chelsea after 110 goals and 81 assists in 352 appearances in all competitions, with two Premier League titles among six major trophies won in his seven seasons at Stamford Bridge.

He inspired Chelsea to a 4-1 win over Arsenal in the Europa League final on his farewell appearance, scoring twice and setting up a goal for Pedro.

Sources told ESPN FC that Hazard had been in regular contact with Zidane for several months, with Hazard and his family looking into housing and school options in Madrid.

Madrid have harboured an interest in the Belgium international for many years and asked about signing him last summer, but Chelsea director Marina Granovskaia made it clear he was not for sale.

Hazard is the third major signing Madrid have made in a bid to rebuild their squad after an embarrassing campaign on all fronts — they ended trophyless, sacked two coaches and finished 19 points behind La Liga champions Barcelona.

They have already recruited Brazilian defender Eder Militao from Porto for a fee reported by Spanish media to be €50m and Serbian striker Luka Jovic from Eintracht Frankfurt for a reported €60m.

Brazilian forward Rodrygo is also due to join the club next season after agreeing to a reported €45m move from Santos last year.