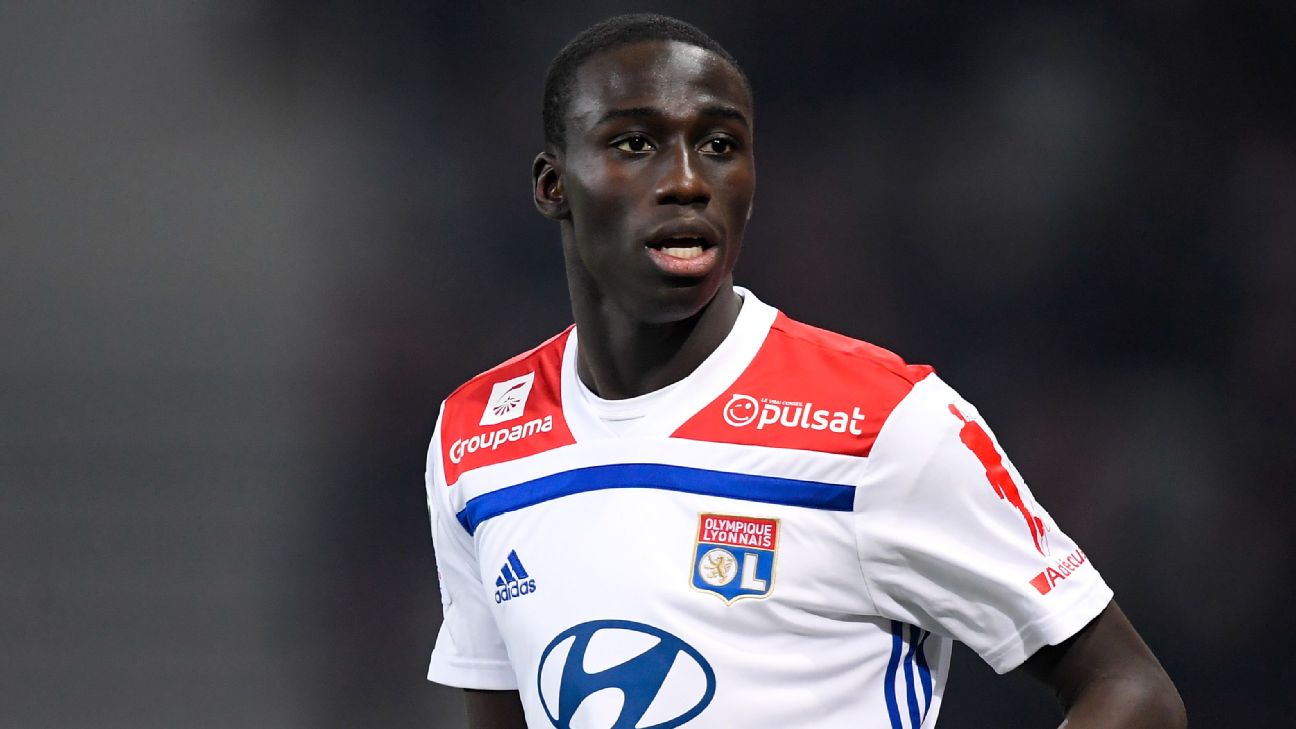 Real Madrid are not hanging about this summer. Fresh from completing the signing of Luka Jovic from Eintracht Frankfurt on Tuesday, Los Blancos are closing in on a deal for Lyon left-back Ferland Mendy.

RMC report the defender has undergone a medical with Madrid while on international duty with France at Clairefontaine. Although nothing has been agreed negotiations are well underway for a €50 million move.

Madrid, who are also linked with Eden Hazard and Paul Pogba, received further good news on Wednesday when Christian Eriksen, another reported target, spoke of his desire to leave Spurs. With Zinedine Zidane‘s summer overhaul progressing well all that remains is to get a few high earners off the books.

17.18 BST: Aston Villa have made a signing from city rivals Birmingham….

“I can’t wait to be in the #PL with this club.” 👊@KingJota speaks for the first time as an #AVFC player.#PartOfThePride pic.twitter.com/QZPyUsstSC

16.51 BST: Paris Saint-Germain have said goalkeeper Gianluigi Buffon has left the club after 12 months in Ligue 1.

The former Italy international joined the French side last summer after 17 seasons with Juventus and won the Trophee des Champions and Ligue 1 title.

However, he and PSG suffered defeat in the Coupe de France final, while Buffon was in goal for the disappointing 3-1 home loss to Manchester United in the Champions League round of 16 which saw them bow out of the competition.

Bale’s future is up in the air this summer and there were reports Conte wanted to take him to San Siro following Real Madrid’s acquisition of Luka Jovic.

However, Jonathan Barnett told ESPN FC the reports were ”the usual rubbish.”

15.15 BST: Napoli captain Lorenzo Insigne has said he would regard former boss Maurizio Sarri moving to Juventus as a “betrayal.”

“This idea hurt us Neapolitans, it would be a betrayal,” he said when asked about Sarri’s proposed move to Juve ahead of Italy’s Euro 2020 qualifier against Greece. “I hope he changes his mind.”

Insigne echoed the words of Jorginho, who worked under Sarri at both Napoli and Chelsea.

14.54 BST: Maurizio Sarri’s appointment as Juventus coach is being held up by Chelsea’s demand for compensation, sources have told ESPN FC.

Juventus are hoping that Sarri will simply be released from his contract at Stamford Bridge, while Chelsea want the Serie A side to buy their head coach out of his deal for a fee in the region of £5 million.

13.45 BST: Fiorentina’s prospective new owner Rocco B. Commisso is making a number of phone calls in order to convince Federico Chiesa to reject Juventus and remain in Florence, according to Il Corriere dello Sport.

13.20 BST: Julen Lopetegui turned down a job offer from the Premier League before joining Sevilla this week, a source has told ESPN FC.

The 52-year-old, who has been sacked by Spain and Real Madrid in the last year, returned to the game on a three-year deal with Sevilla, but not before giving serious consideration to an offer to manage a team in the Premier League, and also talking to Bayern Munich, the source said.

12.49 BST: Tottenham midfielder Christian Eriksen has said he is ready to leave the club this summer and cited Real Madrid as a potential destination.

“I feel that I am at a stage of my career where I would like to try something new,” the 27-year-old said. “I have the deepest respect for everything that is happening at Tottenham and it would not be a negative to stay.

“But I have also said I would like to try something new. I hope something will be decided this summer — that is the plan. In football you never know when there could be a decision like that. It could be at any point. The best thing is always for it to happen quickly but in football things take time.”

12.20 BST: James Rodriguez will return to Real Madrid after Bayern Munich opted against making his two-year loan deal a permanent one.

“A big thank you to the club and fans, who have always supported me,” James said. “Those were two unforgettable years and I always felt at home here. I will only have the best memories of the club and wish Bayern all the best for the future.”

Juve have expressed an interest in re-signing the France midfielder, who is open to a move away from Old Trafford this summer after Ole Gunnar Solskjaer’s side missed out on a place in next season’s Champions League.

Real Madrid are also interested in Pogba and sources have told ESPN FC he would prefer a move to the Bernabeu to link up with compatriot Zinedine Zidane.

Solskjaer is keen to keep Pogba, who scored 16 goals in 47 games last season, and build a new-look team around the World Cup winner.

According to the Spanish radio station, the negotiation to acquire Belgium international Hazard, who is tied to Chelsea for another season, will be completed in the coming days in a transfer worth around €110m.

11.00 BST: Bayern Munich have rejected reports they already lodged a bid for Manchester City winger Leroy Sane, following reports in England that the Premier League champions rejected an offer in the region of €80m

“We have not made an offer for Leroy,” CEO Karl-Heinz Rummenigge told Sport Bild, adding that the Germany international has yet to decide whether he wants to return to the Bundesliga this summer.

The Portugal defender, who has been linked with Atletico Madrid and Valencia, has failed to establish himself in the side since joining from Benfica two years ago, with Barca coach Ernesto Valverde rotating him in and out of the right-back position with Sergi Roberto.

Sources at the Catalan club, though, have told ESPN FC that there are no plans to sell Semedo, who has a €100M release clause.

09.50 BST: Rodrigo said he has asked Atletico Madrid for “space” to decide his future, with Manchester City believed to be willing to meet his €70m release clause.

“I’ve asked [Atletico] for calm, to give me space,” Rodrigo told TV station Cuatro from the Spain national camp. “It would be hypocritical to promise anything. I have a contract with Atletico, it has a clause, with conditions, and as of today I am happy here. I can’t say anything else, as I don’t know what will happen.”

There had been reports that Bayern Munich were also considering paying the €70m clause, however Bayern president Uli Hoeness told Bild last week he had “never heard of the player.”

Kristof Terreur adds that medicals are planned for the 20-year-old with a £10m transfer in the offing.

“Once we were talking in the shower months ago before the reports about Real Madrid emerged and I asked him where he would like to play in Madrid or Barcelona and he said that he preferred Real Madrid a lot more,” Torro told Cadena Ser radio.

Asked if Barca and Real Madrid had contacted Jovic, he said: “Yes. That was a while ago. He liked Madrid as a club. He asked me a lot about the city.”

Torro added that Madrid have made a great signing in acquiring the 21-year-old.

“He is talented, scores many goals and he has a great finish, that is what makes him stronger,” Torro said. “He is young and hungry and will want to fight for a place even at the best club in the world. He is very competitive on the pitch and very calm off it.”

08.10 BST: Romelu Lukaku is the top name on Antonio Conte’s shopping list at Inter Milan, but he is by no means the only one. Reports in Italy reckon Edin Dzeko could join from Roma with Nicolo Barella from Cagliari also an option as part of a summer shake-up.

There are also claims that Manchester United striker Lukaku is a target for Carlo Ancelotti at Napoli if he can’t land Duvan Zapata from Atalanta.

Meunier has 12 clubs to choose from

Thomas Meunier said he’s had offers from up to a dozen clubs since January, and that he could be open to a move from Paris Saint-Germain this summer, a year before his contract runs out.

Speaking to Le Parisien, Meunier revealed that all of the interested parties are competing at the top of their respective divisions. Sources have told ESPN FC that Arsenal and Manchester United are two of the dozen clubs interested in the Belgium international.

The full-back also said his current employers would be foolish to let him leave for free in 12 months, just as they look to be doing with Adrien Rabiot this summer. Playing just one in every three matches and approaching 28 years old, Meunier might feel a move could provide him with more first-team football at a crucial juncture in his career.

Alonso to follow trodden path from Chelsea to Atleti

All the talk around Atletico Madrid has been the destination of departing striker Antoine Griezmann, but the club look set to add Marcos Alonso to their defensive options.

The Mirror reports that the 28-year-old flew to Madrid from Baku, Azerbaijan, two days after the Europa League final and is keen on a deal.

Atletico are losing left-back Lucas Hernandez to Bayern Munich for a whopping €80 million, as well as Diego Godin, Filipe Luis and Juanfran, and so Alonso would be an essential addition to their back line. Diego Simeone has targeted Alonso on the left of defence and Barcelona’s Nelson Semedo on the right as he looks to rebuild his rearguard.

– Fenerbahce are keen on West Ham United playmaker Manuel Lanzini, and the Mirror reports that both Manuel Pellegrini and Irons officials are ready to offer their star man a new five-year deal in an attempt to rebuff the Turkish giants. Lanzini started just eight games in 2018-19, scoring one goal, but he remains a key part of Pellegrini’s plans ahead of his second season in charge of the club.

– Edin Dzeko is on the verge of joining Inter from Roma, reports Calciomercato. The Italian outlet also suggests that Roma have identified three signings to replace him, including AC Milan’s Andre Silva, Fernando Llorente from Spurs and Andrea Belotti from Torino.

LVG: Netherlands battling flu before USA clash
Sources: Pele had COVID before going to hospital
Mexico’s Martino: No fear for must-win match
Follow live: USMNT meet Iran with spot in the round of 16 on the line
FIFA could abandon 3-team groups for 2026 World Cup