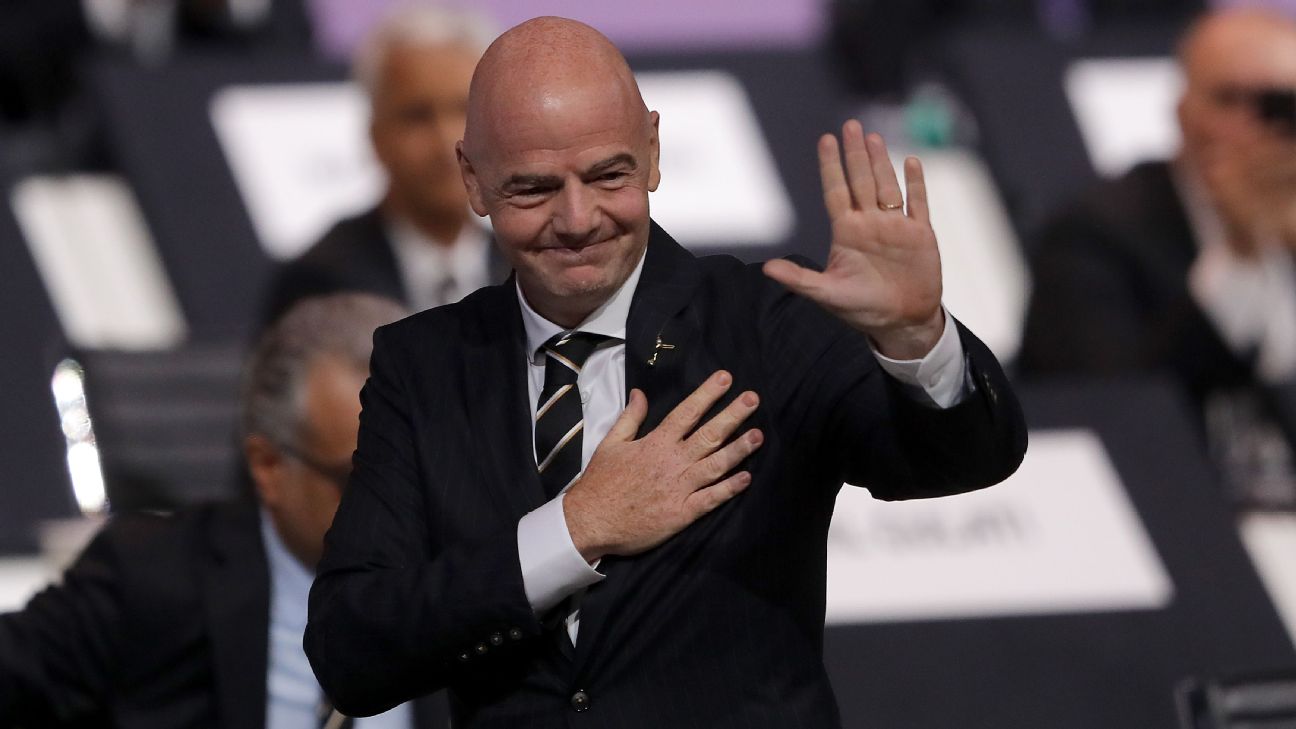 PARIS — Gianni Infantino will serve another term as president after being reelected by acclamation on Wednesday at the FIFA Congress. He addressed a number of topics, from women’s football to FIFA finances to the revamped Club World Cup in 2021, both in front of the 211 nations present and in a media conference afterward.

Here’s a Q&A to make sense of it all.

Q: He was elected “by acclamation”? What does that mean? Folks just clapped, and he got reelected?

A: Pretty much. He was the only guy running, and so, to save time — believe me, elections at FIFA can take forever — they modified the statutes to allow election by acclamation. He enjoyed his moment walking around the stage to the tune of White Stripes’ “Seven Nation Army” and addressing the Congress in four different languages (English, French, German and Spanish) all in the same speech. That’s how he rolls.

With no proper election race and nothing to discuss about expanding the 2022 World Cup in Qatar — last month, FIFA abandoned the notion of increasing the number of participants to 48 as early as then and will introduce the expanded World Cup in 2026 — he reflected instead on FIFA’s achievements during his first term, or, rather, his first fraction of a term. (You’ll recall he has been in office for only three years and four months because of Sepp Blatter’s early “departure.”)

Q: Achievements such as what?

A: He talked about how, when he took over, FIFA was seen as a “toxic, almost criminal” organization, and these days “nobody talks about scandal, nobody talks about corruption.” You can quibble about whether that applies to the game as a whole — in the past three months, we’ve seen Ahmad Ahmad, president of CAF, accused by his secretary general of bribery and misappropriating vast sums, and the Oceania president, David Chung, was banned for six-and-a-half years for corruption — but overall, he’s probably correct.

Those who don’t like him within the FIFA sphere — there are some, don’t let the “election by acclamation” thing fool you — accuse him of being autocratic, a bit of a bully, slightly megalomaniacal and, certainly in the case of the $25 billion SoftBank offer, less than transparent. But nobody is accusing him of being corrupt or of tolerating corruption in exchange for support, which was the problem with some figures in previous administrations.

If you’re really cynical, you might conclude that being seen as — to use his words — “toxic, almost criminal” is bad for business because it scares away sponsors. That’s a big part of his platform: growing FIFA revenues commercially and globally.

Q: Is he doing this?

A: Well, when he came in, FIFA were making around $5 billion per four-year cycle. Three-and-a-half years later, they’re up to $6.4 billion. Cash reserves are up from around $1 billion to $2.75 billion, and the amount of money going back to federations each year has increased from $326 million to $1.1 billion.

Q: OK, but that’s just gravy train money. He sends cash to some corrupt FA head, no questions asked, who then uses it to build himself a new swimming pool and continues supporting him in exchange …

A: Maybe that does happen, but it’s tougher to do than it was before. Infantino cited all sorts of new compliance requirements to ensure that the development funds are spent properly. There’s far greater supervision, and there are external audits, both of FIFA and of each FA (in fact, he made it a requirement that member nations be audited).

“We aren’t investing in dodgy deals. We are investing in the development of football,” he said. “We do this by checking exactly what is done with the money. Our history must not be repeated. That must be clear to everybody.”

Q: Why this obsession with redistributing money to every corner of the globe?

A: Well, it’s part of FIFA’s mission: generating cash and redistributing it. Many FAs would simply shut down without it. It also think it has to do with how Infantino sees the future of the game.

He pointed out that right now, there are maybe 10 nations that have a realistic shot of winning the World Cup. In club football, it’s an even smaller group: 10 or 12 clubs dominate everybody else, but by growing and developing the sport globally, maybe that balance will change. Maybe we’ll have 50 realistic potential World Cup winners. Maybe the world’s top 50 clubs will all be, more or less, on equal footing. Maybe only 20 of them will come from Europe, and the rest will spring up in other parts of the world. After all, wealth exists in other continents, not just in Europe, yet as we’re seeing, billionaires in Asia and North America are choosing to invest in Europe more than in their backyards.

“We say it’s a global game, and sure, everybody plays, but most of the money goes to one place [Europe]” he said. “If we look at European football, it’s largely financed from outside Europe.” He’d love to see that change and said it is his “vision.”

Q: Speaking of clubs, what’s up with the new 24-team Club World Cup? Are Europe’s big teams going to participate?

A: It’s going ahead in the summer of 2021, maybe in Qatar but more likely somewhere else, given the heat. In the meantime, we’ll have two more years of the Club World Cup in its current form. It’s true that the European Clubs Association (ECA) told its members not to take part, but Infantino is very confident that he’ll bring them around. In fact, he said several big clubs have already been in touch and that Champions League winners will be there.

UEFA is expected to have eight slots, so we’ll see how that works out and whether there is a boycott or whether the mega-prize money likely to be on offer turns enough heads.

Q: The Women’s World Cup kicks off shortly just a few miles away from where the Congress was held. Did he have anything to say about that?

A: He was asked about the pay gap and admitted, “anything I say is going to be wrong.” He did point out that prize money more than tripled (from $15 million to $50 million) but said that fundamentally it has to do with the way the rights are commercialized and sold, which happened before he came to office. Effectively, they focused on the men’s World Cup and threw the women’s rights in as a freebie. “We’ll sell you the men’s World Cup, and, look, you can have the women’s, girls, boys, beach soccer and futsal tournaments too!” he said mockingly.

His argument is that doing it this way devalues the competition and, as a result, generates a tiny fraction of the men’s World Cup revenue, which explains the far lower prize money.

“My math isn’t so good, but if the men’s World Cup reaches between 3.5 and 4 billion people and generates $6.5 billion in revenue, then the women’s World Cup, which has an audience of one billion, should pull in at least $1.5 billion, right? But it’s not. It generates far less. That’s why we have to invest in the women’s game. We have already earmarked development funds for the women’s game. If you invest in women’s football, you get them. If you don’t, you don’t.”

Q: What does the future hold?

A: In addition to turning the screws in terms of transparency and accountability, he said that reforming the transfer system is a priority. (“It will be real reform … a revolution!”) And, of course, there’s the elephant in the room: the FIFA calendar, the master schedule that pretty much determines when football can be played. (“It’s Eurocentric,” he said.)

Q: So everything is just dandy in FIFA World? Does the fact that nobody ran against him indicate that everybody is happy?

A: Not quite. You’ll remember Sepp Blatter ran unopposed on more than one occasion, and look at him now. There is no question that as the game — and the money in the game — continues to grow and globalize, there will be more tension and more big hitters chasing it. You’re already seeing it in Europe, with ECA’s proposals for a revamped Champions League.

What does appear clear, though, is that money flows where there is at least an appearance of integrity and transparency. Infantino has done some heavy lifting in trying to change perceptions of FIFA, and for now, everybody is benefiting and he has been useful to many.

Down the road, as the honeypot continues to grow … who knows? Someone might want a bigger slice.