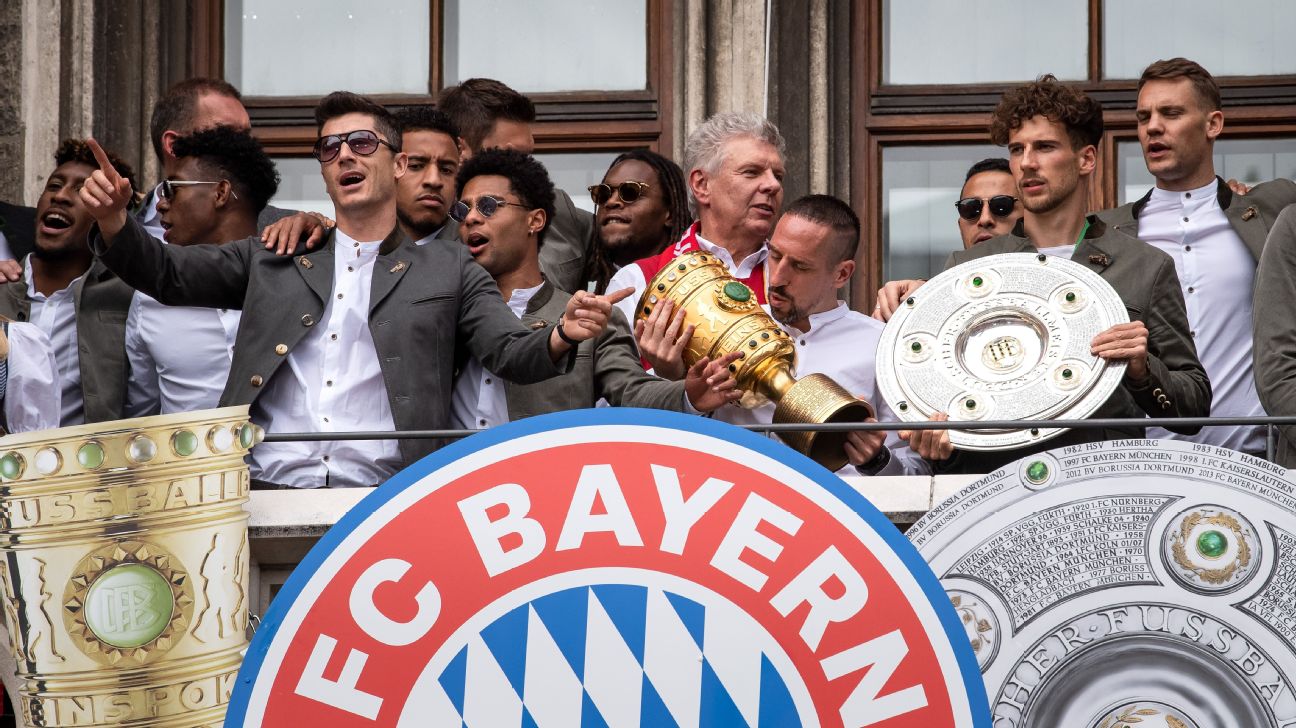 Bayern may have finished the season with a Bundesliga/DFB Pokal Double but that hasn’t quite lifted the skepticism surrounding manager Nico Kovac. This team looks headed for a rebuild and a revamp in the summer and there are plenty of resources available.

Rafinha, Franck Ribery and Arjen Robben are all leaving, freeing up space on the wage bill and so too is James Rodriguez, whose loan won’t be renewed. Lucas Hernandez and Benjamin Pavard are already on their way, but there is clearly more work to do for Oliver Kahn, who is on his way in as sporting director. The club is expected to spend up to €150 million in net terms, maybe a little more. The fact that last season they made a transfer profit of around €75m gives them further flexibility as well.

Raphael Honigstein and Gabriele Marcotti assess Bayern’s squad ahead of what should be a busy summer.

HONIGSTEIN: “They really like Alexander Nubel, from Schalke [as a future No.1]. He’s a year away from free agency, which means you can hopefully get him at a good price, maybe €15 million. You would wait to extend Neuer’s contract if he comes.”

MARCOTTI: “Given his injuries and how much they like Nubel, I agree on waiting to extend Neuer.”

VERDICT: Keep but wait to extend his contract

HONIGSTEIN: “The desire to sign a new goalkeeper at makes Ulreich expendable. And there will be a market for him, given he was the No.1 at Stuttgart for several years. If not, keep him and let him go in a year’s time.”

MARCOTTI: “That’s the Bayern way, isn’t it? Exploit expiring contracts to get talent from your rivals. Agree on Ulreich. No need to keep him around.”

– Sources: Bayern out of the running for De Ligt
– Honigstein: Are Robben and Ribery irreplaceable at Bayern?
– Bayern: Will they get Germany’s latest rising stars?

VERDICT: Keep and extend by a season

HONIGSTEIN: “I’d definitely keep him, though there’s some who want him gone. He’s still very good and is in fact underrated.”

MARCOTTI: “I’m not sure you’ll get a crazy fee for Boateng and if you’re not going to give him a new deal — and you shouldn’t, because of his age — maybe for the right price you let him leave. Pavard and Hernandez can both play at center back.”

HONIGSTEIN: “I really like him and I’d love for him to stay, but he’s made it clear that he wants to leave and injuries have hurt him too. So it’s a case of getting the best price for him.”

MARCOTTI: “You have to sell either him or Hummels and I see the logic in selling him, but he’s got some baggage at this point. I’m not sure how easy it’s going to be.”

HONIGSTEIN: “I’d obviously want to extend his contract and keep him, but he might say no. There will be interest from other big clubs if they believe he might want to leave.”

MARCOTTI: “I agree you try to extend his deal but if he doesn’t sign, maybe you try to sell, because this year and next are your last chance to get a really big fee for a guy who is one of the best in the world at his position.”

HONIGSTEIN: “Kovac loves him but plenty of observers think he’s one-dimensional. Assuming Kovac stays you might keep him. But I’d sell. You don’t need him as a stand-in central defender and he’s injury prone. You can get €20m.”

MARCOTTI: “If he’s fit, you can get more than €20m and he fills a very specific role as a defensive midfielder. I don’t care how much Kovac loves him: Bayern already Corentin Tolisso, Thiago and Joshua Kimmich to play in midfield.”

HONIGSTEIN: “You definitely sell him. He has shown glimpses of talent but Bayern’s game isn’t suited to him.”

MARCOTTI: “He’s had enough chances and given how young he is, €30m might be a realistic target.”

HONIGSTEIN: “Some reckon he’ll never be a Bayern player because he’s just so behind the rest technically. I think it’s too early to make a judgement, but he has a long way to go. Loan him out.”

MARCOTTI: “He needs time and he needs to play so we find out whether he’s any good or whether he’s the second coming of Julian Green. Loan him out, please.”

HONIGSTEIN: “Kovac doesn’t like him and doesn’t give him minutes, but the club rate him highly. If Kovac stays, loan him out.”

MARCOTTI: “No point having a youngster who the manager doesn’t rate. Loan.”

HONIGSTEIN: “Do nothing. He’s been very good the last two seasons, with a poor World Cup in between. You don’t need to give him a new deal because he’s so attached to the club, he won’t think of leaving.”

MARCOTTI: “I basically agree, the only thing is if he wants a deal, you may give him one out of loyalty. But at this stage, he’s not leaving, that’s clear.”

HONIGSTEIN: “There’s talk that the club may want to extend, but I’d wait. I don’t think it makes that much of a difference if a guy has one or two years left. You have to make a decision next year, not this year.”

MARCOTTI: “Given how much of a pain his agent has been all those years when he pretended as if he wanted to leave, I’d call his bluff and wait to extend. Bayern got a lot of us out of him, but I’d imagine his minutes will decline.”

If all our projected sales go through we’ve raised around €75m. Throw in the €150m budget and subtract the €115m spent on Pavard and Hernandez and you’re left with €110m. That’s where things get tricky.

If you sign Nubel for €15m, that leaves you with €95m. You have to get another wide player, ideally a guy who can also fill in on those rare occasions when Lewandowski is not available. Timo Werner is an obvious choice and given that he’s a year away from free agency, you can get him for as little as €40m. Given his goalscoring record and age (23), that would be great business, leaving you with €55m.

Bayern love Kai Havertz — though Bayer Leverkusen reportedly won’t take less than €90m — and they’ve been strongly linked to Leroy Sane (again, we’re talking north of 70m). You need to raise some more cash to get one of those done, which means you need to sacrifice either Javi Martinez or Mats Hummels to have any kind of shot. Either that, or you need to increase your budget even further…

Stones: England to use shock exits as motivation
Follow live: Denmark, Australia square off with spot in round of 16 on the line
Messi ‘annoyed’ by pen miss despite Argentina win
Muller calls Germany exit an ‘absolute catastrophe’
USMNT out of up after rounWorld Cd of 16 loss