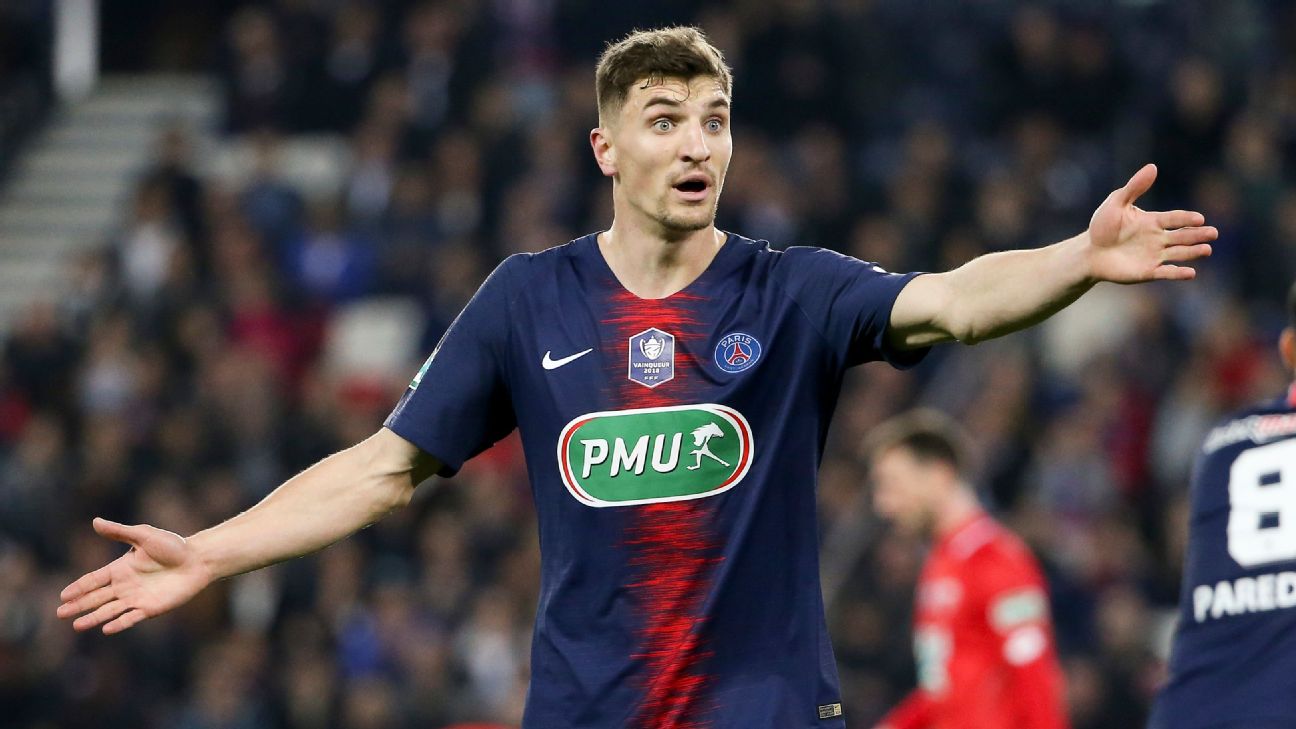 PSG are open to the sale and would demand around €30 million for a player who is entering the final 12 months of his contract amid a strained relationship with the club’s fans and a lack of playing time.

Sources have told ESPN FC that the two Premier League sides have already registered their interest. Arsenal boss Unai Emery, who signed Meunier for PSG, is behind the Gunners’ interest, while United view the Belgium international as a more affordable alternative to Crystal Palace’s £50m-rated Aaron Wan-Bissaka.

PSG’s asking price is more realistic for United than Arsenal, sources added, with both United and Arsenal set to compete in the Europa League next season rather than the Champions League.

The 27-year-old told Le Parisien that “no fewer than 10 clubs, all in the top five of their leagues” have expressed interest in his services since January.

“PSG have not told me: ‘we absolutely want to sell you,'” Meunier said. “They know that they will need me at some point.

“If the club tells me: ‘listen, we want to sell you, we need the money, financial fair play is an issue,’ that I will not play next year as well, then of course we will find a solution that suits everybody.

Before PSG sanction any move for Meunier, they want to know Dani Alves‘ final decision on their offer of a one-year contract extension, with the option of a possible second, that has been put forward to Brazil’s Copa America captain.

If Meunier and Alves were to leave this summer, only youth academy graduates Colin Dagba and Alec Georgen would be left in the right-back role, as well as versatile central defender Thilo Kehrer, dictating that the position would have to be rebuilt through transfers with other areas more badly in need of attention.

Georgen is not deemed ready for first team action after a hellish past year of injury problems, and ESPN FC sources confirmed that PSG do not intend to sell Meunier and Alves this summer.

Meunier, a boyhood United supporter, liked United posts on social media in the wake of them beating PSG in the Champions League, exacerbating a long-standing rift with the French champions’ supporters.

Despite being cheaper than Wan Bissaka, sources have told ESPN FC that Meunier is not a unanimous choice within United’s recruitment team, and that there are question marks over whether a PSG substitute is the right choice to push the team forward under Ole Gunnar Solskjaer.

Meanwhile, sources also told ESPN FC that Ashley Young is likely to remain at Old Trafford this summer amid speculation linking him with a move away — notably to Major League Soccer.

The England international will turn 34 in July but remains a solid squad player to fill in at right and left-back, despite doubts over his ability to play 35-40 matches next season.

Although MLS is of interest to Young, the former Aston Villa man is unlikely to justify Designated Player (DP) money, which would mean that he needs to take a significant pay cut to move to America.