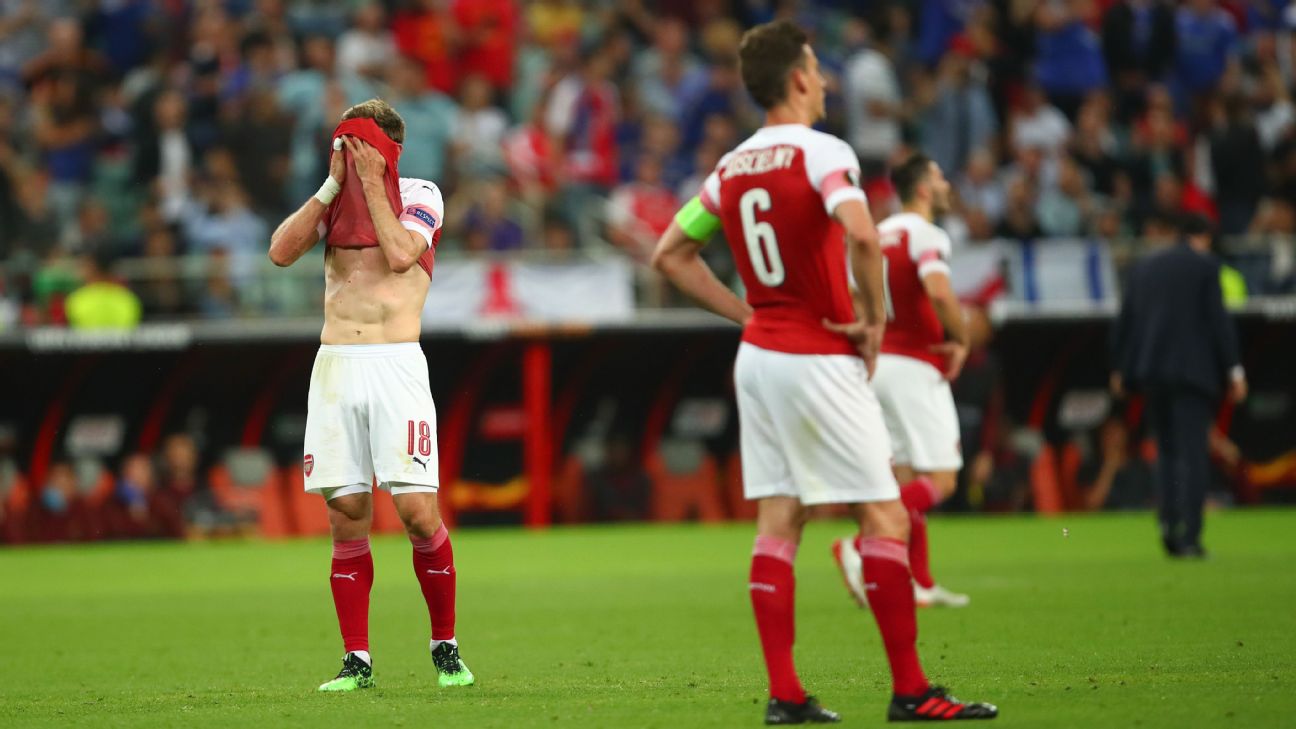 After a goalless first half, Arsenal saw their Champions League dream evaporate in the first 20 minutes of the second half, as goals from Olivier Giroud, Pedro and a send-off penalty from Eden Hazard saw Chelsea run out to a 3-0 lead.

Alex Iwobi pulled one back with a brilliant volley into the top-right corner but Hazard answered just three minutes later to make it 4-1 and squash any comeback hopes in Baku.

No Champions League football once again for Arsenal which is thoroughly disappointing.

None. This was Arsenal’s final kick of the can to qualify for Champions League football and they absolutely bottled it.

Chelsea, who in reality had little to play for, looked like the team fighting for their Champions League lives. That says it all really.

Arsenal miss out on the Champions League for third consecutive season and now face the double-hammer blow of another taxing season of Thursday evening games in picturesque European cities like Vaduz, Soligorsk and Oleksandriya! Yippee!

From a player standpoint: Laurent Koscielny looked every bit of a 33-year-old centre-back, Mesut Ozil and Pierre-Emerick Aubameyang were MIA altogether and the team as a whole showed such little fight after conceding early in the second half. Petr Cech, who kept the score down here, deserved a much better send off than this.

Last but not least, the atmosphere in Baku resembled a friendly more than a final and the whole thing came off very forced. This was not a good advert for the Europa League.

3 – Picked the team expected with Henrikh Mkhitaryan unavailable but after a decent first 10 minutes, it was all downhill from there. Tactics aside, Arsenal never showed the fight or hunger of a team that needed more than anything to win this game and while the players deserve the large brunt of that blame, Emery cannot get off scot free for that either. After the first goal went in, Arsenal’s heads dropped and their defence crumbled, a problem Emery was unable to solve all season. The season being a success or failure hinged on this game and frankly, it blew up in Unai Emery’s face.

GK Petr Cech, 6 — In the final game of an illustrious career, the veteran showed he is still a more than capable goalkeeper, making multiple saves to keep the score down. His brilliant first-half save on Giroud was the highlight, as his team left him out to dry in the second half. Couldn’t have done anything on the four goals and deserved a much better end than this.

DF Sokratis Papastathopoulos, 5 — Bailed out Laurent Koscielny in the 29th minute after the Frenchman gambled at the midfield line and in the same sequence, later was on hand to block a low-driven shot from Emerson Palmieri. Like his teammates dropped dramatically in the second half but at least he threw himself about and showed some fight.

DF Laurent Koscielny, 3 — Never seemed sure of himself from the opening whistle and allowed his compatriot Giroud to get inside him for the opener. At 33, he looked very old and was directly at fault on three of the goals. This was a nightmare for the captain and after nine good seasons, it is clearer than ever that Arsenal need to get younger at centre-back.

DF Nacho Monreal, 4 — Another veteran who struggled here, Monreal was caught ball watching on the second goal by Pedro and was subbed on 66 minutes.

MF Ainsley Maitland-Niles,  5 — The only Englishman on the pitch at the start, the 21-year-old made one good early run down the right and delivered an inswinging cross to produce Arsenal’s first dangerous moment. Made another crucial intervention on Hazard and with Granit Xhaka, was Arsenal’s best in the first half. The second was a much different story as he struggled defensively, lost the ball leading to Chelsea’s second and conceded the penalty for the third. Good going forward at times but much room to grow on the defensive side.

MF Lucas Torreira, 4 – The combative Uruguayan worked hard as he alway does but found little joy on this evening. Was visibly gutted following the following whistle and at least was one who looked like he genuinely cared.

MF Granit Xhaka, 5 — Grazed the crossbar with one thunderous, long-distance effort just inside the half-hour mark and sprayed a few nice crossfield passes in the first half. Was one of the better Arsenal performers but then again, that wasn’t saying all too much.

MF Sead Kolasinac, 4 –– Had one effort blocked by Cesar Azpilicueta in the first half that could have gone anywhere and another cross/shot punched out by Kepa. His passing was wayward though, and although he wasn’t terrible, he didn’t contribute much at either end.

MF Mesut Ozil, 3 — This was one for the Ozil critics as the polarizing midfielder was nowhere to be seen. The talent is unquestionable but his inconsistent play and tendency to disappear in games remains a great frustration. Didn’t live up to his high wages here as the commentator may have mentioned his name once in the first half before he was subbed on for young Joe Willock.

FW Alexandre Lacazette, 4 — Had an early shout for a penalty after being taken down by Kepa Arrizabalaga but the foul was not given. Worked hard but like his strike partner Aubameyang, had little of the ball as Arsenal’s attack never got out of first gear. Good season for him overall but no happy ending here.

FW Pierre-Emerick Aubameyang, 3 — Arsenal’s leading light all season, especially in this competition, he just never got going here. Arsenal needed him to come up big here to secure them Champions League football but he could not deliver on this occasion. Didn’t have a ton of service but the elite of the elite find a way to leave an imprint in the big games even if they don’t score.

MF Matteo Guendouzi, 5 — Came on for Monreal but the game was already lost at that stage.

MF Alex Iwobi, 6 – His finishing is often criticised but he scored an absolute banger here with a rocketed volley into the roof off the net to give Arsenal a brief flicker of hope.eeeeeee

MF Joe Willock, N/R – Did more in 13 minutes than Ozil did in 77, looking lively, running himself about and even having a couple of shots at targer. He’ll be one for this competition next season.