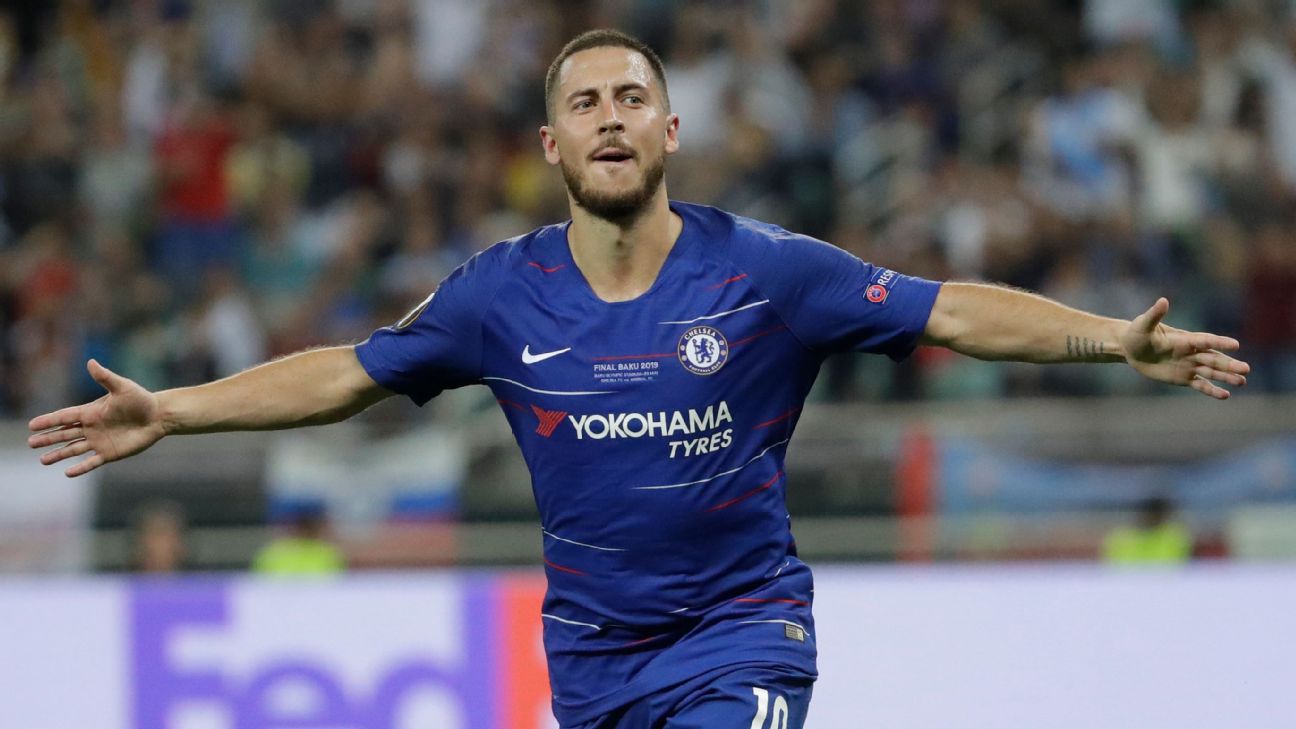 Eden Hazard will be wearing the No. 7 shirt at Madrid if and when his switch to the Bernabeu is confirmed, says the Sun

It reports that Madrid are keen to get Belgium international Hazard signed as quickly as possible.

Despite the monumental fee that he is expected to fetch when he finally leaves London, Madrid are reluctant to let him wear the No. 10 shirt he has worn with distinction at Chelsea.

Instead, he’ll be wearing the No. 7 — which belonged to Cristiano Ronaldo before he left for Juve last summer. The No. 7 is currently under the ownership of Mariano Diaz, but Diaz is said to be more than happy to hand it to Hazard.

09.42 BST: Yesterday, Aston Villa manager Dean Smith was linked with one of his former Brentford players, Birmingham City attacker Jota. Today, he is being linked with another – the Bees’ former Chelsea midfielder Josh McEachran, the Birmingham Mail reports.

09.15 BST: Reports suggest that Leicester, Everton and Manchester United are all interested in Chelsea defender Reece James after his outstanding season on loan at Championship club Wigan.

Barcelona are ready to sell big over the next month in order to balance their books for the 2018-19 campaign, says Marca.

It reports that the cost of transfers and payments, which have been spread in order to provide the La Liga giants with some short-term gain, have come back to haunt them this month, meaning sales rather than new arrivals, could be the name of the game in the coming weeks.

The amount Barca need to recoup by selling players has not been revealed, but Catalunya Radio reported that it could be as much as €70m, although Marca claim it could be closer to €40m.

Whichever is true, it’s clear that the start of the transfer season could be a race to get bodies out, including Everton loanee Andre Gomes and Arsenal loan signing Denis Suarez.

Manchester City have been seeking a suitable backup and eventual replacement for midfield stalwart Fernandinho, and it seems they have a contingency plan if a move for first choice Rodri, of Atletico Madrid, falls through.

The report says that City don’t want to pay Atleti the €70 million release clause in Rodri’s contract, but time is not on their side as Tottenham are moving for Ndombele, with the Champions League finalists having had an initial bid rejected.

Maurizio Sarri has requested his release from Chelsea in light of reaching an agreement to take over as Juventus manager, according to Goal.

The Italian led the Blues to the Europa League title and a third-place Premier League finish in his first season at Stamford Bridge, but his future has been questioned.

According to the report, Sarri’s agent met Chelsea management on Friday to express a desire to return to Serie A and succeed Massimiliano Allegri.

Chelsea have not yet given their answer, but previous reports have suggested that club legend Frank Lampard, who to led Derby to the Championship playoff final in his debut season as a manager, could take over.

– The Manchester Evening News reports that United’s quest to land Sporting Lisbon’s Bruno Fernandes will be completed as soon as next week.

– Despite uncertainty over contract talks this summer, the Mail says says Ilkay Gundogan will remain at Manchester City and David Silva will stay despite being linked with a move to Japan or Qatar.