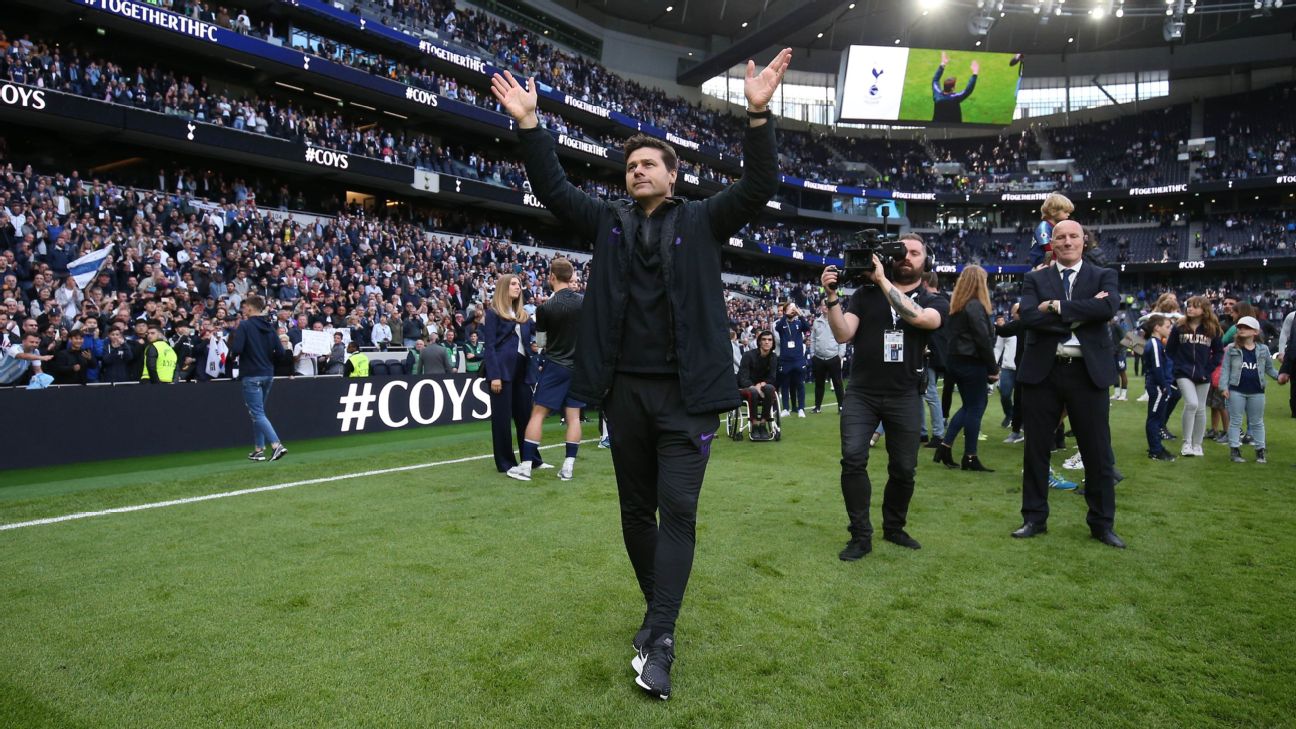 They are on the cusp of winning the biggest prize in club football but Tottenham Hotspur might also be on the brink of losing the man who made it all possible.

Mauricio Pochettino has had plenty of opportunities to ease the fears of chairman Daniel Levy and every Spurs supporter that Saturday’s Champions League final against Liverpool in Madrid will be his last game as manager, but so far, he has skilfully avoided doing so. One thing for certain is that Pochettino knows what his future holds. After all, he’s been laying down markers for his next chapter for longer than many would acknowledge.

Pochettino was quick to talk up his Italian ancestry when he was preparing to take his Tottenham team to face Juventus in February 2018. The Argentine’s great-great-grandfather emigrated to South America from the Piedmont region of Italy in the early 19th century and Pochettino, who was discussing the prospect of an “amazing game” against Juve, didn’t hide his excitement that he would finally “get to breathe the Turin air.” He repeated his admiration of Juventus and sense of feeling at home during the prematch news conference in Turin. Perhaps he was merely being polite to his audience, but that would risk underestimating the 47-year-old’s awareness of his reputation as the next big thing in coaching at the elite end of the game.

He has also spoken positively about Real Madrid and Manchester United in the past, with only Barcelona prompting a “not for me” response from him due to his time as a player with Espanyol. But by talking so effusively about his connection to Turin, Pochettino was making an investment in his future. If Juventus ever needed a new coach, well, he was almost one of their own.

“Mauricio has given everything to Tottenham and that has been obvious over the past five years,” a source who knows the Spurs manager told ESPN FC. “But he’s also extremely ambitious and he knows he would could walk into virtually any job in the world after what he has done at Spurs.

“No matter what happens against Liverpool in the Champions League final, he will be at the top of every club’s wanted list and he knows that. He’s very smart.”

Juventus are now looking for a new coach following Massimiliano Allegri’s departure earlier this month and Pochettino’s name is up there alongside those of Maurizio Sarri and Jose Mourinho in the list of leading candidates for the job. With a Champions League final on the horizon, Pochettino could kill the speculation instantly by insisting that he is committed to Tottenham but instead, the only message coming from the Spurs boss has been that of a man who is keeping his options open.

“Today, nothing is more important than the game we have ahead,” Pochettino said on Monday, when asked whether his future was 100 percent committed to Tottenham. “To think about individual things is a little bit embarrassing and a shame. I am not important.

“It is not important what happens in the future with me. I think we have bigger things ahead to think about. I am not important more than the Champions League or the possibility to win a trophy. Rumours are rumours.

“After the final, we will have time to talk but today, my commitment with Tottenham is 100 percent.”

Having guided Spurs to their first-ever Champions League final this season, Pochettino is in a position of strength that enables him to play the guessing game. He’s consistently guided the club to a top-four finish in the Premier League since arriving from Southampton in 2014 and, although he has not yet been able to win a trophy with Spurs, his success in moulding a young team into one of Europe’s best has been his real achievement.

Due to the rocketing costs of financing the club’s new stadium — it’s now reportedly costing in excess of £1 billion, having initially been priced at £400m — Spurs have been massively outspent by their domestic rivals and have not even signed a player since acquiring Lucas Moura from Paris Saint-Germain in January 2018. Pochettino has had to turn Spurs into a force, and keep them competitive, with his hands tied in the transfer market, but his ability to succeed regardless is what has caught the eye of Europe’s top clubs like Juventus, United and Real.

Pochettino was on a three-man shortlist, alongside Mourinho and Ryan Giggs, when United searched for a replacement for Louis van Gaal three years ago — the Spurs boss was photographed having lunch with Sir Alex Ferguson in London just a week before Van Gaal was dismissed — and he’d been the only candidate to succeed Mourinho when he was sacked last December.

– 2019-20 UCL draw pots for Premier League teams
– When is the Champions League final? All you need to know

But the freakishly good start by caretaker-manager Ole Gunnar Solskjaer prompted United to hand the Norwegian a permanent three-year contract rather than stick to Plan A of recruiting Pochettino. It remains to be seen whether or not that decision will return to haunt the Old Trafford hierarchy.

Yet even though he is contracted to Spurs until the end of the 2022-23 season, the Champions League final is beginning to look like a crossroads moment for Pochettino. His recent comments have more than hinted at a sense of disillusionment with the financial restrictions that come with managing Tottenham and, win or lose this weekend, it’s difficult to escape the sense that this is as good as it can get for Spurs at a time when paying for the stadium will impinge on his determination to improve the squad.

Is now the time to stick or twist? Pochettino appears to be torn by that dilemma. His detractors would suggest that he has yet to win a trophy and that his teams always seem to fall short when the pressure is on or a prize is within reach. But one former player told ESPN FC that Pochettino — who was ranked No. 7 among the world’s managers in last year’s ESPN FC 100 — cannot be judged on trophies alone.

“He makes players better, it’s as simple as that,” the ex-player said. “Top players want coaches to improve them and he has done that with virtually every player he has worked with at Spurs, and prior to that, at Southampton.

“He is similar to Jurgen Klopp in that. And also like Klopp, he is a positive character and players love to play for managers who don’t spend all their moaning and complaining.”

But for all of Pochettino’s qualities, a trophy would not go amiss on his CV and there is no bigger prize in club football than the European Cup. He is just 90 minutes away from lifting it with Tottenham. If that happens, he knows he can choose what happens next and whether his future is in North London and Turin, Manchester or Madrid.

Pochettino already knows he is on to a good thing, no matter what happens. His reputation has been forged by what he has done to this point — the question now is who he is with when he takes his place in the next level.