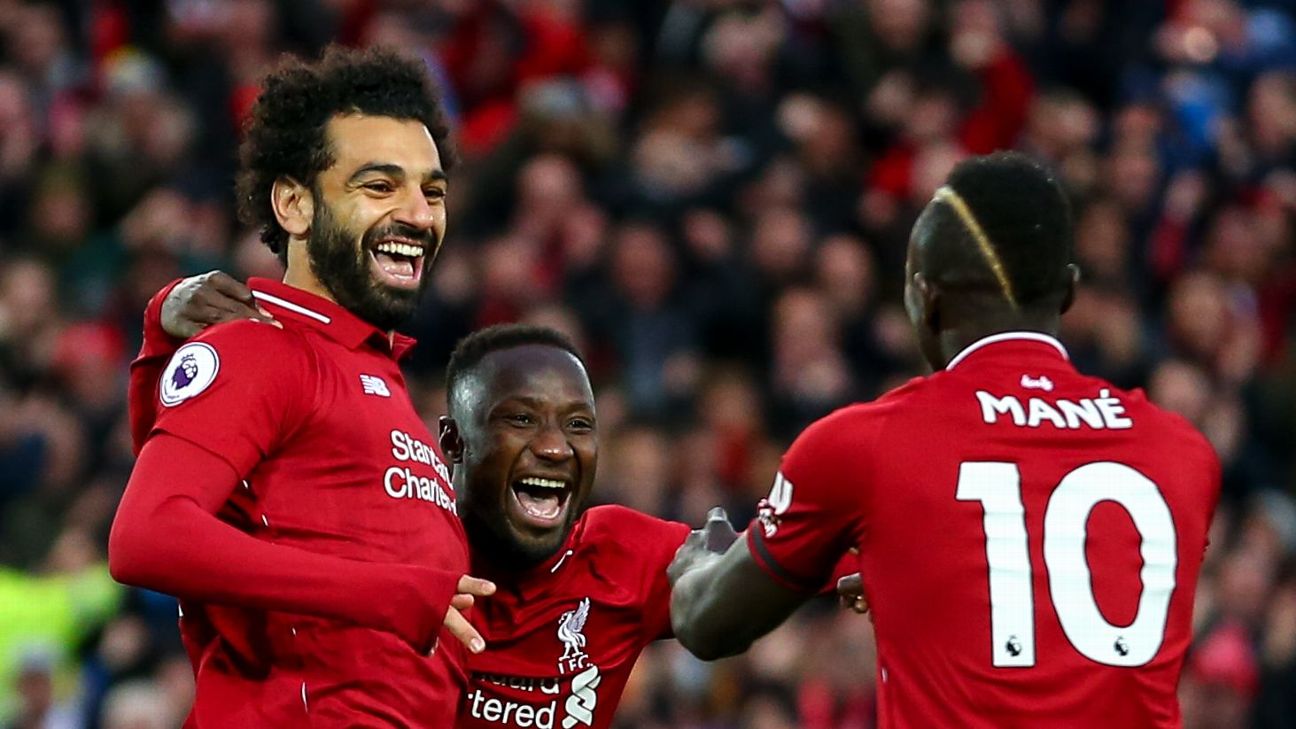 The past few years have seen a drop in African appearances in the Champions League final, but with both Liverpool and Tottenham Hotspur boasting prominent continental talents, the dearth will end on Saturday.

Between 2000 and 2012, Africa’s players regularly made decisive contributions to Champions League-winning sides, only for the continent to enter a slump at the highest level of European competition.

No African player won the crown for five years, until youngster Achraf Hakimi with Real Madrid last term, but he is only the latest in a long line.

After the tournament’s inauguration in 1955, then branded as the European Cup, it took 30 years for an African player to win the competition.

Bruce Grobbelaar, of Zimbabwe, was Africa’s first European champion, and was influential as Liverpool dispatched AS Roma on penalties in 1984.

The goalkeeper’s ‘wobbly legs’ technique in the shootout that followed a 1-1 draw distracted Bruno Conti and Francesco Graziani enough for both to miss their spot kicks in the shootout, and ensured a place for the stopper in Reds folklore.

While Grobbelaar was the first African international to clinch Europe’s greatest prize, he wasn’t the first African-born player to conquer the continent, with Eusebio, Mario Coluna (both born in Mozambique), and Angola-born duo Jose Aguas and Santana all part of the fine Benfica side of the early 60s.

Three years after Grobbelaar’s heroics in Rome, Algeria’s Rabah Madjer became North Africa’s first winner, and few of the continent’s players have made such a vivid impact on the tournament final as the FC Porto forward.

With his side trailing, the attacker struck an impudent back-heeled equaliser in the 77th minute, before Juary struck a winner to defeat Bayern Munich.

George Weah – the continent’s only Ballon d’Or winner – never got his hands on the trophy, but Abedi Pele (Marseille in 1993), Nwankwo Kanu and Finidi George (both Ajax in 1995) all added their name to an almost exclusively European and South American roll call of former winners.

Football’s talent flow changed further at the turn of the century, as Sammy Kuffour and Geremi contested Europe’s grandest prize.

Ghana centre-back Kuffour endured mixed UCL final fortunes. His despairing fist-thumping of the Camp Nou turf was one of the defining images of the 1999 final, when Manchester United came from behind to defeat Bayern Munich 2-1 in stoppage time, although he was a winner when Valencia were defeated two years later.

Geremi was part of the Real Madrid side that won the title in 2000 and 2002, although he was an unused substitute in the victory over Valencia at the Stade de France and then watched on from the stands as Zinedine Zidane’s magnificent winner downed Bayer Leverkusen at Hampden Park.

Geremi and Kuffour, however, represented merely a precursor to the subsequent years of success for African players in the Champions League final.

Benni McCarthy became South Africa’s first winner when he came off the bench as Jose Mourinho’s Porto defeated an AS Monaco side containing Shabani Nonda, Emmanuel Adebayor and Tony Sylva in 2004, while Djimi Traore was part of the Liverpool side that defeated AC Milan on penalties a year later, following the most dramatic final in the tournament’s history.

It was in 2006, the first time that three African players started a Champions League final, that Samuel Eto’o’s influence on the biggest match on the European football calendar truly began.

On that occasion, the Barcelona star scored a 76th-minute equaliser before an Arsenal side containing Kolo Toure and Emmanuel Eboue were seen off in Paris.

No African player has won the title more than the striker – a champion with Barcelona in 2006 and 2009, and with Internazionale in 2010 – and he became the second player in history to score in two finals when he netted in ’09.

Only three other players have won the title with different teams in consecutive years, with Eto’o – now in a modified role on the right flank – a winner at Inter alongside Sulley Muntari.

By the time of their 2009 triumph, Barca had added Mali’s Seydou Keita and Yaya Toure to their ranks, with the latter shoehorned into a centre-back role as Manchester United were defeated in the final.

Keita, a favourite of Pep Guardiola, was still at the club for their 2011 triumph – again against Sir Alex Ferguson’s side.

No Champions League-winning side has leaned on African talent as heavily as Chelsea, who became London’s first European champions when they dispatched Bayern Munich on penalties in the Germans’ backyard in 2012.

Not only has a UCL-winning team never boasted as many African talents – John Obi Mikel, Salomon Kalou, Michael Essien and Didier Drogba were all present – but none have been as indebted to one of the continent’s stars for their success on the big day.

Drogba, ever the player for the big occasion, appeared as a man possessed at times at the Allianz Arena, and on a one-man mission to bring ‘old big ears’ to Stamford Bridge.

First, he kept Chelsea alive with an 88th-minute equaliser following Thomas Muller’s opener, and then stepped up to slam home the decisive spot kick after Ivica Olic and Bastien Schweinsteiger had missed for Bayern.

Rarely had a European Cup final success owed as much to one player, and never have African players so emphatically underpinned a UCL triumph.

Having produced 16 winners between 2000 and 2012, and with a further six African players having played in the European final during that period, the continent’s influence among Europe’s biggest sides waned.

After Chelsea’s success in 2012, it would be another four years before an African player featured in the showpiece fixture, when Thomas Partey came off the bench in Atletico Madrid’s defeat by Real in 2016.

While Hakimi was a winner with Real Madrid last term, the Morocco full-back – currently on loan at Borussia Dortmund – made just two appearances in the group-stage, and owed his winner’s medal to the injury sustained by first-choice right-back Dani Carvajal in late 2017.

Few players have demonstrated the consistent excellence of Liverpool’s Mohamed Salah and Sadio Mane in the Champions League over the last 24 months.

They were two of the competition’s outstanding individuals last year, with the Senegal forward became the fourth African player to score in a UCL final when he netted, in vain, against Real Madrid.

The pair, two of the key protagonists in Liverpool’s return to prominence under Jurgen Klopp, scored 10 goals each during the competition, and were beaten to the Golden Boot only by Cristiano Ronaldo.

Those numbers have dipped this term – Salah and Mane have four goals each – yet they’ve again demonstrated their aptitude to thrive on the biggest stage, with the West African notably stealing the show as Bayern were defeated in the Round of 16.

Joel Matip has also overcome an uncertain start to life at Anfield to earn his stripes as Virgil van Dijk’s partner in the heart of the Reds’ defence, while Naby Keita, injured for the final, excelled in a goalscoring display against Porto in the quarters.

Spurs have been less reliant on African talent, although while Serge Aurier hasn’t featured after making his fifth continental appearance of the season against Borussia Dortmund in the Round of 16, Victor Wanyama is returning to prominence at just the right time.

The Kenya international, whose brother McDonald Mariga was an unused substitute in Inter’s 2010 UCL success, has struggled to build on the early promise he showed in North London after injury and a loss of form ravaged his progress. However, he’s played in five of Tottenham’s six knockout games, and may well have a part to play on Saturday.

Whichever side prevails in Madrid, African players will get their hands on Europe’s grandest prize and, for the first time since 2012, the continent will produce a notable protagonist in a successful UCL campaign.

Rice: Other nations should fear England at WC
England’s Sterling ruled out due to ‘family matter’
Pele in hospital; daughter says ‘no emergency’
Giroud makes history, Mbappe stuns as France advance, but will injuries cost them the trophy?
Busquets wants future sorted amid Miami link