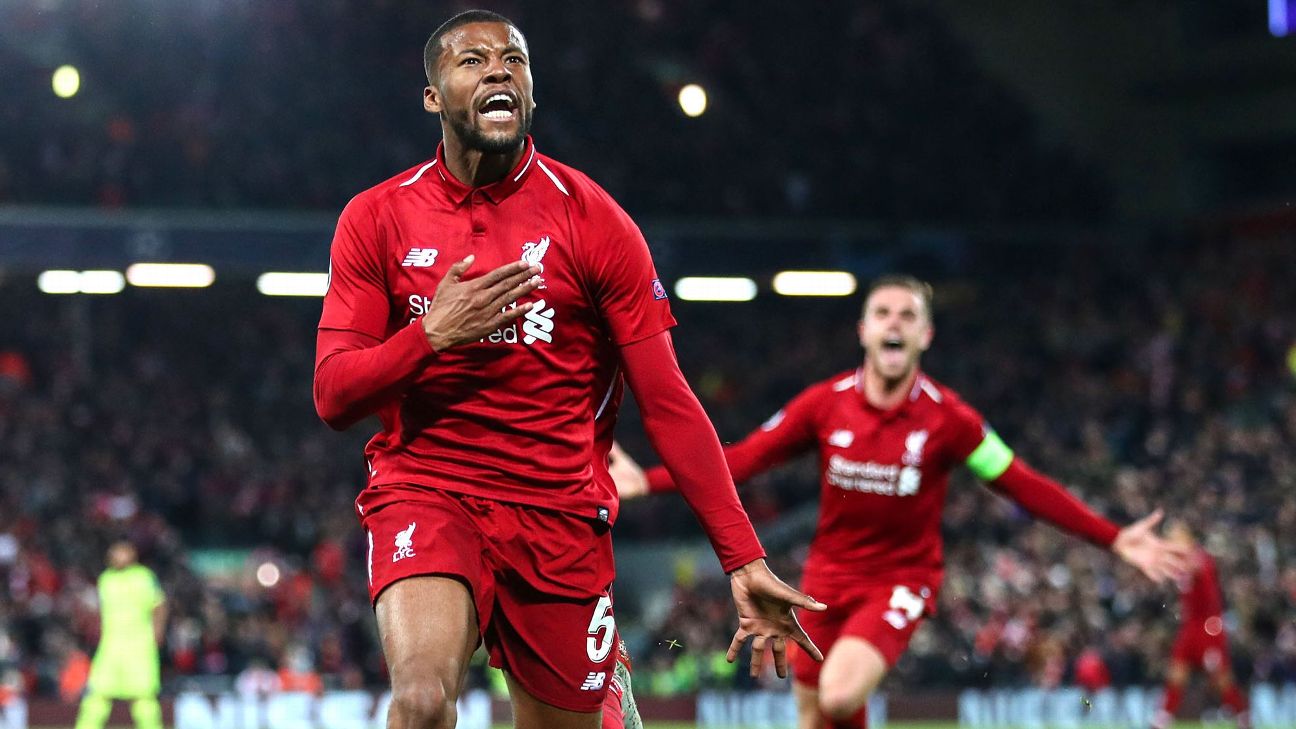 Georginio Wijnaldum has told ESPN FC that Liverpool must blank out the “negative” memory of losing last season’s Champions League final against Real Madrid if they are to defeat Tottenham and win the club’s sixth European Cup in Saturday’s showpiece in Madrid.

Liverpool, who lost 3-1 against Real in Kiev 12 months ago, go into this season’s final against Spurs as favourites, partly due to their experience of playing in club football’s biggest game last year.

Netherlands midfielder Wijnaldum played a huge role in guiding Liverpool to the final in Madrid by scoring twice as a substitute during the incredible 4-0 semifinal second-leg victory against Barcelona at Anfield earlier this month.

But after being on the losing side in last season’s final, Wijnaldum believes that the only way to taste victory this time around is by forgetting all about the defeat against Real last year.

“Let’s hope the outcome will be different this year,” Wijnaldum told ESPN FC. “I think last year we were all disappointed about how the final ended, but that’s football. We took it as a lesson and we will try and make a better end this year.

“I look at it as another game and another opportunity, so I don’t really think about what happened last year.

“You don’t want to think about the negative stuff. To reach the final is already a good thing, but the way it ended up [last year] was really hard for us, so that’s why I try to look forward and try to do it even better.

“I don’t think we have to make up for last year because we gave everything we had to win the final and unfortunately that didn’t happen.

“So I don’t really want to speak about making up. We just have to try and win it and see it as a new final.”

The challenge facing Liverpool this time around is wholly different to that they encountered a year ago, however.

Real were chasing their 13th European Cup and ultimately won their third successive Champions League in Kiev, but this weekend’s opponents, Tottenham, are preparing for their first ever Champions League final and first final in any competition since the 2015 EFL Cup Final.

Mauricio Pochettino’s team are novices on the European stage and Wijnaldum admits that Liverpool will have to deal with going into this final as favourites.

“But every game is a new game and it’s going to be a tough one. Hopefully not, so we can win it easy, but I don’t think that will happen because Tottenham is a good side, they have good players and as a team they are quite good.

“A lot of people think we are favourites because we’ve won two times [against Spurs this season] and we finished higher in the Premier League, but that says nothing about the game we are about to play right now.

“This is one game, one final and anything can happen. They have a really good team like us, so it’s going to be difficult to win the game.”

Despite their progress under Klopp since the former Borussia Dortmund coach succeeded Brendan Rodgers as manager in October 2015, Liverpool’s trophy drought predates his arrival, with the club not winning a major honour since 2012.

They almost ended the club’s 29-year wait for a league title this season before finishing just a point behind eventual champions Manchester City, but with Pep Guardiola’s team in control of the title race going into the final straight, Wijnaldum believes that in the Champions League, everything is in Liverpool’s hands.

“I think every title we win is a good one and we gave everything to try and win the Premier League,” he said. “Unfortunately it didn’t happen.

“The last game was something we couldn’t control, the performance of City, but now we can control the final that we play. So yeah, I think this is a bigger chance to win.”