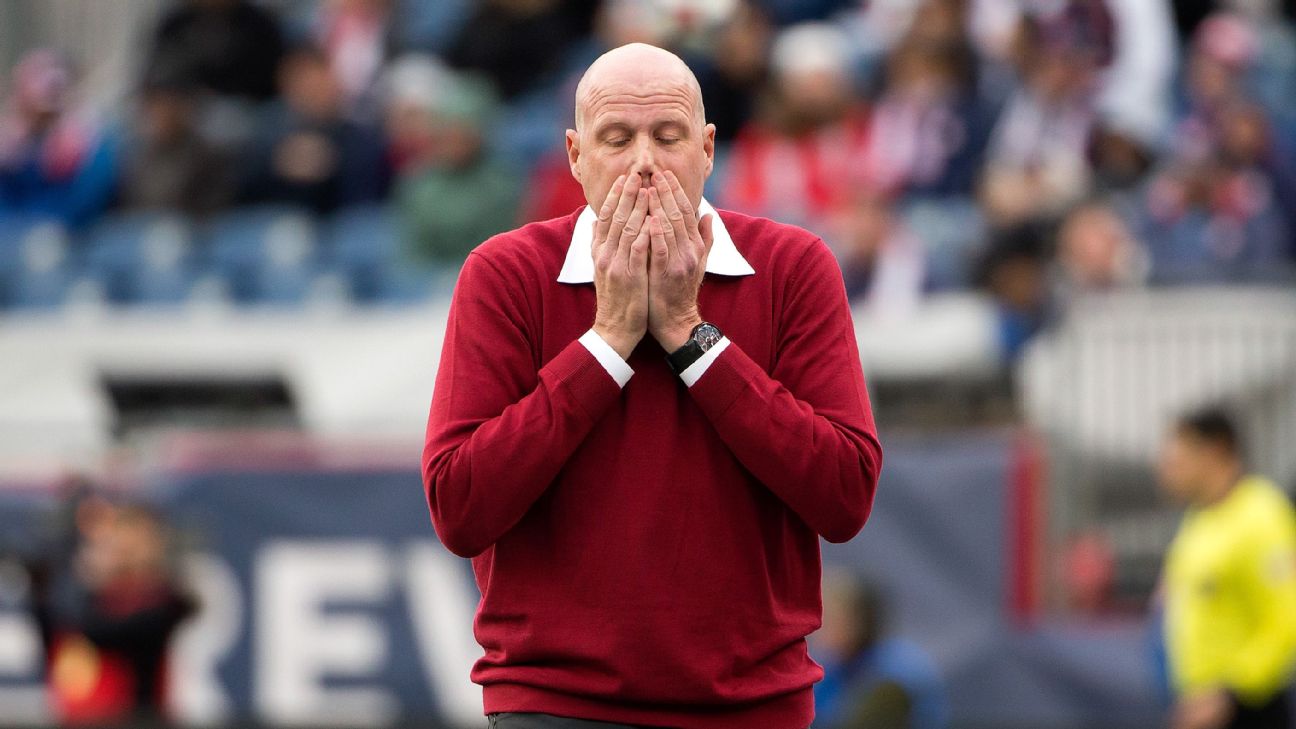 Tuesday was the most recent demarcation line for the New England Revolution. That day’s practice session was Bruce Arena’s first since being named sporting director and manager on May 13, although when he’ll coach in an actual game is still to be determined.

“I’m about 1 percent of the way there in this project,” Arena told reporters on Tuesday. “It’s a lot to learn, a lot of things to evaluate. I’ve patiently tried to get a better feel for things here. I’m getting there, but it’s going to take some time.

“Will I be on the field [on Sunday against the LA Galaxy]? I don’t know yet. If I think I’m going to be a distraction to the team, I won’t do it.”

Yet Arena’s hiring, at least in the short term, was intended to be just that: a massive distraction, be it from a team that has struggled on the field all the way through an organization that hasn’t kept pace with the rest of MLS.

The task Arena is undertaking is enormous. Sure, the Revs recorded a 1-0-2 record under interim manager Mike Lapper, but they’re still stuck in 11th place in the Eastern Conference, four points out of the seventh and final playoff spot. Is a playoff spot still achievable? Thanks to a playoff format that is even more forgiving this year, of course it is, but it will require more than just a new coach bounce.

Arena’s remit involves arresting a death spiral now into its fourth year. It’s one that has spanned two head coaches and witnessed an exodus of talented players since the team’s last MLS Cup final appearance in 2014, from defender Jose Goncalves to midfielder Lee Nguyen to forward Krisztian Nemeth. The previous decade saw the likes of Jeff Larentowicz, Michael Parkhurst and Andy Dorman depart.

The talent drain points to a philosophy emanating from owners Kraft Sports + Entertainment that is borne out of the “Patriot Way” that the Krafts have used with their NFL franchise, one that basically consists of “Come here for less, play with Tom Brady (who has also taken pay cuts), play for Bill Belichick, and win.” But it’s one thing when a league like the NFL has a salary cap of $188 million. It’s quite another when the MLS “salary budget” is $4.24 million.

Granted, the practical cap in MLS when Designated Players and the various forms of allocation money are thrown in is higher, with data from the MLS Players Association pointing to an average spend of around $7 million. Still, when players are scraping for dollars that need to last well beyond their retirement age — in their 30s at best — the Revolution’s approach does little to engender any loyalty to the organization. It’s also made it difficult to attract players from within the league.

– Carlisle: Arena can revive New England — if the Revs buy into his vision
– It’s time for Philadelphia to finally embrace the Union, too
– Donovan: ‘Remarkable efficiency’ led to Wondo’s MLS goals record

“Tom Brady, he’s an anomaly, he’s the best player, he takes a pay cut and he wins Super Bowls,” said one source familiar with how the Krafts run their sports teams. “That’s what they’re measuring off of. They think everyone should fit into that mold. In MLS, that’s impossible.”

Sources have also detailed how team president Brian Bilello — who is still with the club — and now-former GM Mike Burns had different styles of operating, with Bilello more inclined to be the good cop, and Burns the bad cop. That approach can still work, but in the Revs’ case it didn’t result in success.

“The culture wasn’t simplified, it could be conflicted a little bit,” said one source.

That grinding approach to player salaries nearly robbed New England of its biggest acquisition in the past decade, that being midfielder Jermaine Jones. Multiple sources have confirmed that when Jones initially came on the market, he was immediately offered to the Revs only for Burns to pass on the opportunity due to Jones’ multi-million-dollar salary demands. It was only when word finally filtered up to Revs investor/operator Jonathan Kraft that the Revs dove back in. By then, Jones was nearly in the arms of the Chicago Fire, but the Revs were saved by the much-reviled “blind draw” that ultimately placed the midfielder in New England. A trip to the MLS Cup final followed.

The team has enjoyed little in the way of success since, and it’s not a mystery as to why.

“I think it mostly comes down to players,” said Chris Tierney, who retired last year after spending 11 seasons with the Revs. “When you compare the squad we had last year, and the squad we have this year compared to other teams in the league, they just aren’t as good. I think it’s as simple as that. I’m not sure Jose Mourinho could have gone into New England and gotten that much more out of the squad that was in place.”

The introduction of Targeted Allocation Money (TAM) — and New England’s reaction to it — has done the most to leave the Revs behind. Gone are the days when one acquisition — like Jones in 2014 — can transform a team. It also requires hitting on multiple foreign acquisitions. Under Burns, that didn’t happen with nearly enough frequency.

The infusion of $4 million per team in TAM (including discretionary TAM) puts a premium on having a robust infrastructure in place, something the Revs still lack. They hired Remi Roy as a full-time scout prior to the 2018 season, and later added another in South America. Yet, it was Roy’s first foray into that role, having previously served as an assistant coach. Time is needed to settle into such responsibilities.

One source familiar with the Revs’ setup described it as, “the tip of the iceberg,” in terms of what is needed.

All of this puts New England in a place where the margins are impossibly thin, and little problems can become bigger ones. One example is winger Cristian Penilla, whose drop in form coincided with the denial of visas for some family members. The Revs were counting on the 28-year-old to provide service for new forward Juan Fernando Caicedo, and the absence of Penilla’s contributions is one more reason for the Revs’ sputtering attack.

The situation is exacerbated when ownership opts to hire coaches with little in the way of previous experience. Former manager Brad Friedel’s biggest strength coming into the post — his first at the professional level — was his vast playing experience in Europe during a career that lasted into his 40s. But beyond the fact that playing and managing are two completely different jobs, Friedel’s experience also became a weakness.

Friedel, who declined to be interviewed for this article, complained more than once about how he found it difficult to motivate his players because unlike in Europe, there is no promotion and relegation and that the players “don’t have fans waiting by their cars” and “losing doesn’t hurt enough,” despite the fact that such issues related to the country’s soccer culture are things he had zero control of.

He criticized the players’ mentality in 2018 as well, although Tierney stated that Friedel’s comments weren’t as big of an issue as those outside the club tried to make it.

“The truth is we hadn’t been doing well,” he said. “I think we as players felt like we didn’t have a lot of ground to stand on in terms of complaining about trying something different. Brad had a very specific, very regimented way that he went about things. I think at times, especially some of the senior players in the squad, I think that we thought we were being micromanaged a little bit, and didn’t necessarily feel like were treated as respected, experienced professionals.

“At the same time, he was trying to change the culture and had to make some significant statements to make that happen. I think that was part of his plan, to say and do things that made us think and made us react. Whether it worked or not, the evidence points to no, but I understand where he was coming from.”

Now it looks like the Krafts are finally ready to tweak their philosophy. Arena has a lengthy track record of success in MLS. His ability to connect with players has long been his strength. It remains to be seen if the same will be true of those above and beside him. The former U.S. manager will also have total control of the technical side. He’ll have to coexist with Bilello, but one gets the sense that he’ll have more say in terms of getting things done, much like he did with the LA Galaxy while working with team president Chris Klein.

Arena will also have the benefit of a new $35 million training facility, which will at least help the Revs operate more out of the shadow of the Patriots. It will no doubt help with player recruitment. As would a reported new soccer-specific stadium within the confines of Boston, although it remains to be seen whether such a project will ever come to fruition.

But the success of Arena’s tenure will depend on the organization’s willingness to invest in human capital. One source said Arena’s departure from the New York Red Bulls in 2007 was due in part to New York’s inability to provide him with the off-field resources he felt was needed to succeed. In New England, a narrative has emerged that is along the lines of “Arena wouldn’t have taken the job without assurances he would get money.” Arena’s plans are unclear at the moment (no Revs executives were made available for this article), but the organization needs to grow quickly and smartly. And it will take some time for those investments to pay off.

“I think the perception in the media is that the Krafts are less involved than they actually are,” said Tierney. “For someone who has been at the club for a long time, these guys are heavily invested, not only in this team, but in this league. I think it’s just a matter of timing. I think that they have a very specific plan of how they want to treat the club, and the training ground being the first sign of them beginning to make more and more of an investment. Bringing in Bruce is another sign.”

But all of that is a way of catching up to rest of the league. Having a training facility isn’t as unique as it once was. The same is true of having a robust scouting operation.

Making those investments won’t guarantee success, but it will increase the likelihood that the Revs can make a clean break with the past.