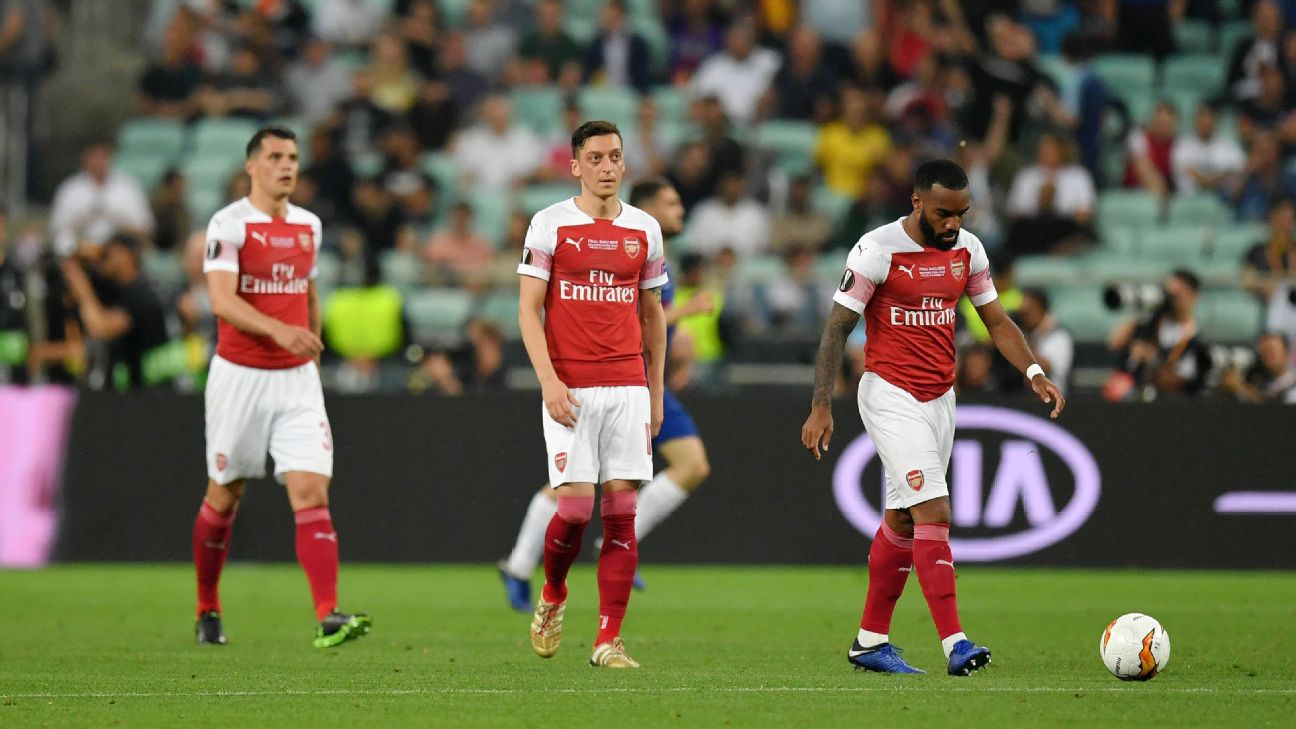 Arsenal manager Unai Emery expressed disappointment in the team’s 4-1 loss to Chelsea in the Europa League final but asked fans to continue to trust the process.

After a goalless first half, Arsenal saw their Champions League dream evaporate in the first 20 minutes of the second half, as goals from Olivier Giroud, Pedro and a send-off penalty from Eden Hazard saw Chelsea run out to a 3-0 lead.

Alex Iwobi pulled one back with a brilliant volley into the top-right corner but Hazard answered just three minutes later to make it 4-1 and squash any comeback hopes in Baku.

“The first half we were in the match with possibilities. We didn’t concede too many chances to them, with one good save from Petr Cech,” Emery said. “We wanted to carry on our game plan and take our chances when they came. But they scored the first goal. The first goal was very important in this match because, afterwards, we needed to play with calm but we made some mistakes.

– VOTE: For your man of the match
– UCL draw pots for Prem clubs
– Who qualifies for Europe from the Premier League?

“They have very good players to make use of these mistakes, and efficiently score. After the second goal, it was even more difficult.”

“We knew it would be difficult, and we are in our process. I want to say to all the supporters, we are in this process,” Emery said. “Really the first target has not been achieved this year, but I think we are closer: firstly in the Premier League, and secondly in this competition, playing this final. Next year is a big challenge to take one more step in our way, in our will with young players.”

For Emery, his first year in charge of Arsenal ends without any silverware and no hopes of Champions League football. The Spaniard won three straight Europa League titles while in charge of Sevilla.

“Next year is a big challenge to take one more step in our way, in our will with young players. We are disappointed today but, in general, I think we made a new step improving and being competitive. We’ll need to make one more step next year.”

Emery admitted the loss and absence of Champions League play could affect the team’s transfer strategy, but wouldn’t specify on any potential signings or exits.

“We need to analyse, speak with the club, speak with the players, and do one step more in our way. But our idea is to continue carrying on improving with the young players who arrived last year. Maybe some players need to leave, to take a new way. But it’s not the moment to speak about that.”

Among those players departing Arsenal this summer include Aaron Ramsey and Danny Welbeck. Mesut Ozil could also be on the move after an uneven year at the Emirates.

Cech, who has been linked to a return to Chelsea as sporting director, said: “Until the 30th of June I am still an Arsenal player and I won’t decide on anything.”