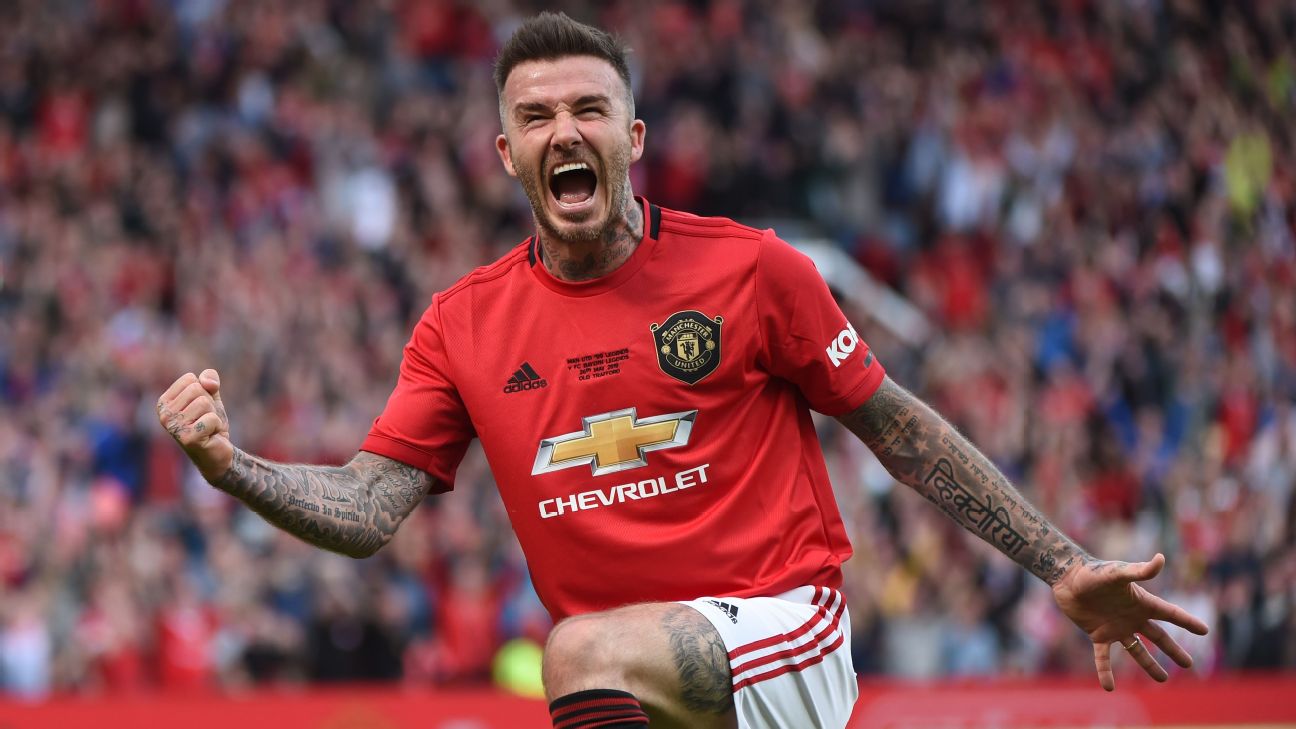 Jump to: Solskjaer scores in legends’ match | Dean does it again | Dutch referee gets on the scoresheet. Wait, what? | De Rossi says farewell to Roma fans

The legends’ game between Manchester United and Bayern Munich brought back happy memories and familiar faces to Old Trafford.

Among them was David Beckham, who dazzled with a goal to cap off the day’s festivities — which celebrated the 20th anniversary of United’s 1999 Treble, capped off by an unforgettable Champions League final win over the German giants.

David Beckham scores and celebrates in style and then Sir Alex Ferguson smiles along and celebrates too. Just like the old days! pic.twitter.com/T4AkjvKEAQ

Beckham was the only crowd favourite to to score as the current Man Utd gaffer also showed off!

Ole Gunnar Solskjaer proved he’s still got it in the Red Devils’ legends game against Bayern Munich, scoring the opener in the match — quite a nice bookend considering it was his 93rd-minute goal at the Camp Nou that delivered United the big-eared trophy.

Best cross I’ve seen at Old Trafford this season by David Beckham and a better Goal scorer than we have Ole Gunner Solskjaer…. oh and Scholes is still better than PogFraud #MUFC #Treble99 pic.twitter.com/8sTGl1Vbk6

With talk of Romelu Lukaku leaving Old Trafford and United looking for a new centre-forward, Ed Woodward may just need to look at the dugout

We eagerly await the Man United manager calling his own number in the 2019-20 season!

Premier League referee Mike Dean made headlines recently for his wild celebration of Tranmere’s League Two playoff semifinal victory and so it was not a huge surprise that his cult hero status was amplified further when Rovers took on Newport County in Saturday’s final at Wembley.

Prior to the game, fans donned masks paying tribute to the man who has dished out more than 100 red cards during his time in the middle.

Once the game began, it took the TV cameras a while to spot the great man but, just before half-time…

Tension grew as the game headed into extra time with the score still 0-0.

Mike Dean is every fan inside Wembley right now 😱

But just as penalties began to look inevitable, Connor Jennings popped up with a 118th-minute header to give Tranmere the lead. Cut to the stands:

Mike Dean was LOVING IT.

Dutch referee gets on the scoresheet. Wait, what?

In the Dutch fourth tier, Harkemase Boys led HSV Hoek 3-1 midway through the second half, when this happened:

You have to appreciate the goal-sniffing instincts of the referee, not that Harkemase were too happy at the time. They can laugh about it now, though, having gone on to win the game 4-2.

Incidentally, such official-inspired japery will be outlawed from next season, when a dropped ball will result whenever the ball strikes the man in the middle.

On Sunday, almost 18 years after making his debut for the club, Daniele De Rossi will appear in a Roma shirt for the final time. Ahead of his side’s encounter with Parma, the Giallorossi captain said farewell to the club and its fans in a letter.

On the eve of his final game for #ASRoma, Daniele De Rossi’s heartfelt message to all those who have influenced his career…

The last week has seen supporters of Juventus and Lazio pay tribute to De Rossi, but we suspect those feelings of goodwill are nothing compared to what awaits the 2006 World Cup winner at the Stadio Olimpico this weekend.

“No-one will ever love you more than I do,” said the 35-year-old as he signed off. We suspect the feeling is mutual for one of the game’s legendary one-club men.